"This new one draws a good line, and its colour is admirably laid on by Klemperer..." - The Gramophone, 1930

The present release brings together the complete Richard Strauss orchestral music recorded during the 78 rpm era by Otto Klemperer and Leo Blech. Although Blech also recorded some Strauss aria and song accompaniments, these were his only versions of the composer’s purely orchestral repertoire, while Klemperer would go on to re-record his items and more for stereo LPs three decades later. Neither, however, left enough from the shellac era to fill out a CD, so it seemed fitting in this Strauss sesquicentennial year to combine them in one place.

Klemperer’s recordings impress with their vitality (these must be among the fastest performances of Don Juan and Till on disc) and a surprisingly modern approach, both in terms of interpretation and ensemble playing. There are no rhetorical gestures which call attention to themselves, and neither are there very many of the string slides we associate with the prewar era. While he was not well-served by Parlophon’s choice of venue or engineering, the clarity of the recordings do allow us to hear details often buried (including the substitution of a celesta for the glockenspiel in Don Juan [Track 1, 9:06–9:10], something he would not repeat in his 1960 Philharmonia remake). By contrast, his sole recording here by the HMV team sounds much more naturally balanced.

Blech, who was Klemperer’s senior by fourteen years, is more of the old school in terms of elastic tempi and orchestral playing. His Death and Transfiguration is a rare opportunity to hear him in an extended work, as he was usually relegated to conducting overtures and short pieces on disc.

The sources for the transfers were early British Parlophones for Don Juan; Australian Parlophones for Till; German Electrolas for Salome, Bourgeois Gentilhomme and Death and Transfiguration; and an Australian HMV for the Rosenkavalier disc. 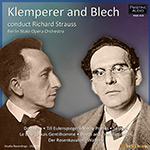 The natural ascent of the musical line to a rarified transcendence occurs fluidly and spaciously, the string tone from the BSOO having retained its lustrous glow

Despite a relatively late start in music, Leo Blech (1871-1958) mastered piano and composition studies, with, among others, Engelbert Humperdinck. In 1893 he became the conductor of the Stadttheater (Municipal Theater) in Aachen. He continued his work with Humperdinck during the summers of 1893 to 1896. He left Aachen in 1899 to become the conductor of the German opera theater in Prague. In 1906, he became a conductor at the Berlin Royal Opera (Königliche Kapelle) and was appointed its general music director in 1913. Ten years later, he moved over to become the artistic director of the Deutsches Opernhaus, Berlin. In 1924, he went to Berlin’s third opera company, the Berlin Volksoper and in 1925 to the Vienna Volksoper.

He returned to Berlin in 1926 to conduct the Staatsoper. Despite being a Jew, he remained in that position until 1937. Perhaps luckily, he was guest conducting in Riga, Latvia, when it became clear that it was unsafe to return home. He found a position as conductor at the Riga Opera House. The Soviet Union absorbed Latvia and the other Baltic states, which were then overrun by German forces in 1941. Blech left ahead of the Nazi army and settled in Stockholm, where he was known through his guest appearances. He obtained a position at the Stockholm Royal Opera, remaining there until 1949. He returned to East Berlin in 1949 to become conductor of the Städtische Oper (Municipal Opera) until his retirement in 1953.

Mark Obert-Thorn restores Blech’s 1928-1929 Electrola inscriptions of music by Richard Strauss, itself a rare privilege, since most of Blech’s legacy remained restricted to opera excerpts, with the exception of concerto work with Fritz Kreisler. The 18 October 1929 inscription of the 1917 Intermezzo from Le Bourgeois Gentilhomme enjoys a wistful lightness quite transparent and easily akin to the treatment this neo-Baroque music receives from Clemens Krauss. The Rosenkavalier Dances (12 December 1928) bask in Old-World elegance invested with impish puffery and aristocratic flirtation. The breadth of the occasional outburst reminds us of equally potent renditions by Erich Kleiber.

The Death and Transfiguration (15 October and 7 November 1928) sets the early violin solo against a warm series of chords in the harps and woodwinds that by any standard remains remarkably illuminated and rife with imminent terror by way of the tympani part. The transitions to the various upheavals and paroxysms of the dying man inject pungent energy – especially in the BSOO horns – informed by a distinct sense of panic. The tempos, even in the amorous or reflective passages, achieve a controlled hysteria which miraculously does not smear the elegance of the vocal line. The natural ascent of the musical line to a rarified transcendence occurs fluidly and spaciously, the string tone from the BSOO having retained its lustrous glow.

Otto Klemperer (1885-1973) enjoyed direct sponsorship from Richard Strauss as well as Gustav Mahler. His performances of Don Juan (28 June and 25 October 1929) and Till Eulenspiegel (3, 24 June 1929) for Parlophone belie his later reputation for slow, moribund tempos. Klemperer intends to make Don Juan a whirlwind affair, displaying his pungent brass and brilliant string ensemble. The erotic elements in the score, however, retain their allure. BSOO intonation, crisp and free of rhetorical portamentos, moves with directness and elastic brio. The celesta substitution for the glockenspiel makes for an exotic moment of color, a la The Nutcracker. The climactic moments have resonance and conviction, if not the exaltation that Koussevitzky achieves, but the denouement proves effective.

Klemperer’s Till Eulenspiegel moves equally briskly, even while retaining the fairy-tale charm in its opening measures, girded by a solid French horn and puckish woodwinds. The series of picaresque adventures moves with breezy security, the performance intent on providing the color details – in rondo form – of Till’s various pranks that lead to his inglorious hanging. The piercing D clarinet well signifies first Till’s disbelief in his own fate and then his shriek of tragic recognition.