“These 1950s recordings remind us what a passionate Mozartian Beecham was. Pristine has refreshed the sound expertly” - The Sunday Times, 2014

The symphony recordings here were both made for US Columbia LP releases. In both cases the works had been recorded with Beecham's previous orchestra, the London Philharmonic, for EMI 78rpm release in March 1940, but in both cases these are the only studio recordings he made to tape, and the only recordings made with the Royal Philharmonic of the two symphonies. Both were issued later in Europe on Philips and its subsidiary label, Fonata, from which the present transfers were drawn. Recording quality, post-XR remastering, turns out to have been remarkably and consistently good, albeit in mono for both recordings - the originals prior to this remastering being somewhat harsh in reproduction, particularly the 1950 recording of the 38th Symphony.

By contrast the Divertimento, made by EMI in the most controlled conditions of Abbey Road studios required less XR adjustment to bring out its magic. The recording does, however, raise some questions to which I, at the time of writing, can offer only speculative answers. The recording originally appeared on a mono LP, alongside a 1957 recording of the Jupiter Symphony. Its reissue in 1968 was, likewise, mono, but a recent CD issue on EMI is in full stereo.

A careful examination of the mono and stereo issues reveals a number of differences, but at the same time a number of clear similarities. At times one is convinced they are the same recording - elsewhere the playing is clearly different, if only slightly. I can only conclude that the recording sessions were captured both in mono and stereo separately (this being a time when stereo recording was still in an experimental stage). The mono tapes would have been edited for release, as is normal, but when EMI returned to the stereo tapes for their recent reissue, either by accident or by design they produced a different edit, using some of the same and some alternate takes by comparison to the original mono master approved by Beecham, which appears here. A careful examination will reveal considerable timing differences in some movements between the two versions. 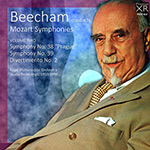 Beecham moves the rising and falling scales with bustling aplomb, the individual colors never once sacrificed while he maintains a luxurious fleetness of execution

Audio engineer and producer Andrew Rose resurrects a trio of classic Beecham renditions of Mozart the conductor inscribed for both Columbia and HMV, 1950 and 1955. Many a collector of the old CBS LPs will recall his fondness for ML 4313 (rec. 18 April 1950), the “Prague” Symphony as led by a virile Beecham with the Royal Philharmonic, a full-blooded account whose sound now has the benefit of having had its formerly sonorities softened enough for us to savor he wit and robust accents Beecham intended.  The Beecham approach to Mozart does not aim for its Viennese charm, even if it be transposed to the Czech capital which greeted Mozart in 1787 with unabashed affection.  Beecham’s opening movement communicates – in the course of four themes spread over 30 measures – a regal pomp and ceremonial verve in its trumpets and drums, as though the spirit of Haydn were nigh, with energetic resonance in the plastic syncopations and counterpoints. Robustly fervent, a spirit of breathless invention and exalted buoyancy permeates the playing, inspired and thrilling alert, at once.

The extraordinary Andante demands we attend the exotic colors and shadowy harmonies, especially in the RPO woodwinds as they progress over low strings. The chromatic line of the strings has sinew and erotic beauty, the music sighing contrapuntally and then becoming decisively and even morbidly martial in spirit.  The vivid colloquy in the winds often moves into the minor mode with an almost Baroque sense of anguish, yet the effect remains elegantly noble. The hectic last movement challenges any ensemble for clarity and dexterity simultaneously; even Leopold Mozart admonished his son’s testing of the Prague players. The RPO bassoon has as much of a workout as the more exposed, higher register players. The explosive and aerial acrobatics move with lithe grace under Beecham, playful but always deftly athletic, a performance with meat!

Beecham originally recorded the 1788 Symphony No. 39 on 22 October 1955 for CBS (ML 5194). Mozart seems to have conceived the work as a constant fusion of polar energies, with melodies that often divide the emergent line among various instruments, like the clarinet. The dotted rhythms and ceremonial splendors of the opening Adagio – Allegro yield to a series of plaintive melodies that indulge the violins’ E strings. The strings execute rocket figures as well as pizzicato magic, and the RPO horns have rarely sounded so opulent. The A-flat Major Andante con moto extends the stately gravitas of the opening of the first movement, offering a darkly colored line that becomes mordant and emotionally troubled. When the full body of strings exults in tandem with the woodwinds, the effect haunts the imagination.

Few Menuetto and Trio movements communicate as much raw power as Mozart’s here in this work. Furtwaengler’s Berlin recording remains the most potently tragic and militant reading I know, quite belying the laendler character of the original folk dance. Beecham’s realization enjoys a healthy swagger and estimable sense of bright purpose. The punctuated winds and horns demand our admiration. The Trio adds a second chalumeau clarinet to the texture, and over the pulsating strings Beecham injects an air of bucolic mystery. The 2/4 Allegro finale proves another galloping example of Beecham’s virtuoso orchestra in delighted, delightful throttle, with exuberant chirps from bassoon and comrade woodwinds. Beecham moves the rising and falling scales with bustling aplomb, the individual colors never once sacrificed while he maintains a luxurious fleetness of execution.

Beecham inscribed the 1772 Divertimento No. 2 fro HMV on 22 December 1955.  The piece would qualify as a serenade, except it calls for four horns and possesses a ceremonial slow movement that may have been intended for a wedding. Beecham’s entire concept here waxes frothy and bountiful of sound, especially in his wind, string, and horn parts. The Adagio plays as a true love song.  Every bar indulges itself in the finesse and stylish elegance of a refined taste. As one reviewer for The Gramophone stated in 1968: “Anyone who doesn’t delight in Beecham’s incomparably stylish way with it, as well as in the superb playing. . .well, I am sorry for him!”  So, save yourself the pity and purchase this exemplary restoration.