Although Willem Mengelberg had first come to New York to open the Philharmonic’s season in 1905, it was not until sixteen years later that he appeared regularly before the city’s concert-going public. At that time, the board of the fledgling National Symphony Orchestra (unrelated to the later orchestras of the same name headed by Walter Damrosch and Hans Kindler) brought Mengelberg in to rebuild the ensemble and share the leadership with Artur Bodanzky. The next year, following Mengelberg’s recommendation, the orchestra was merged into the New York Philharmonic, with the Dutchman ultimately becoming principal conductor. It was at this time that Mengelberg made his first recordings with the ensemble.

As the decade progressed, both Furtwänger and Toscanini were engaged for extended guest conducting appearances with the Philharmonic. While the former left after two seasons, Toscanini stayed on as the orchestra merged with yet another ensemble, Damrosch’s New York Symphony, to form the Philharmonic-Symphony Orchestra of New York in the fall of 1928. Toscanini was appointed principal conductor, with Mengelberg accepting the lesser role of associate. Ultimately, politics from within and without the orchestra took their toll, and Mengelberg left New York in early 1930, never to return.

Before he did, however, he completed one final series of sessions for Victor which featured the two Beethoven symphonies included here. Unlike his previous recordings with the orchestra, these sessions were held in Liederkranz Hall, a presumably cheaper-to-rent venue than Carnegie Hall, a choice which was most likely driven by the then-recent stock market crash that brought on the Great Depression. While the ensemble was at its full strength, close miking and an unreverberant hall made it sound much smaller. In addition to the two symphonies, Mengelberg also recorded the overtures to Die Zauberflöte, Egmont and Hansel und Gretel during these sessions (all reissued on Pristine PASC 378).

One noteworthy aspect of the present Eroica is the inclusion of all repeats. While the one in the third movement was only sporadically observed during the 78 rpm era (it is, for example, absent in Mengelberg’s Telefunken recording with the Concertgebouw), this would be the only appearance of the first movement repeat on any commercial recording until Erich Kleiber’s 1955 Vienna Philharmonic LP. Mengelberg’s only complete live broadcast of the work with the Concertgebouw omits it. In the First Symphony, he observes the repeats in the first and fourth movements, as he did in his Concertgebouw broadcasts but not in his Telefunken recording. He does not take the second movement repeat in any extant performance.

The transfers were made using the best sides of two Victor “Z” shellac pressings for each set. Although this is the quietest material in which they were available, the original recordings have a higher-than-usual amount of noise inherent in the original matrices. A small amount of reverberation has been added to bring warmth to the dry-sounding originals.

These performances are examples of the best of Mengelberg's style, and I believe they would probably rank higher in critical esteem had they been as well recorded as his Heldenleben with the same ensemble.  The use of a smaller recording venue, close miking and noisy original master processing has led them to be largely passed over in favor of his Concertgebouw versions.  I hope that the present transfers will allow for a better appreciation of Mengelberg's achievements with this orchestra over his decade in New York. 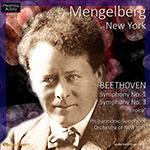 This has become an “Eroica” to reckon with, rather than just an historical artifact

These two performances were recorded in New York’s Liederkranz Hall during the first and second weeks of 1930. They were the final recordings Willem Mengelberg would make with the Philharmonic. He departed for Amsterdam after a January 19 performance of Les Preludes, never to return, leaving the orchestra not to Toscanini, as is often assumed, but to its third regular conductor, Bernardino Molinari. Both recordings were notable for including exposition repeats, rare on any 78s.

Compared to Mengelberg’s exciting but erratic 1940 Telefunken “Eroica” with the Concertgebouw, this performance is correct and restrained, with a smaller modicum of Mengelbergian tempo adjustments. The Allegro con brio, taken at a rapid clip for its era, sings and roars, in a wonderfully vital performance. In a Fanfare 17:6 review, I found some portamento in the Funeral March “disconcerting,” but now I find it quite acceptable. That the Philharmonic has always been a great Beethoven orchestra is as apparent here as it is in Toscanini’s 1936 Seventh Symphony, but the horns do have a rough time in the scherzo’s trio. The finale is far more consistent than in the Telefunken recording, with the Poco Andante played at a reasonable pace.

The First Symphony is less consistent—as are both Concertgebouw performances. Innumerable tempo adjustments interfere with this clean, straightforward music. The Philharmonic’s playing, too, is inconsistent; there are some wonderfully alive passages and some sloppy ones. On the whole, this performance is preferable to the Concertgebouw ones, but Beethoven’s First and Mengelberg are clearly incompatible. And yet, and yet....The Minuet and Trio are wonderful: high-spirited, light, and graceful.

Twenty years ago (Fanfare 17:6), Biddulph issued these two recordings in transfers by Mark Obert-Thorn. The transfers were clean and clear, but we were still hearing early-electrical 78s, with their typical distortion and grit. Obert-Thorn is again at work here; his ever-growing reputation now earning him the title Producer and Audio Restoration Engineer; he also writes the program notes. Restoration software (and hardware: Remember reel-to-reel tape and razor blades?) has come a long way in the intervening decades, and Obert-Thorn’s vast experience must also contribute to the improvements. The sound is quite different now: Harsh, steely strings have become violins, violas, cellos, and basses; grit has been minimized almost to the vanishing point, distortion is far less intrusive, and some subtly added reverberation has mollified the rather thin, dry recorded sound. Trumpets are still piercing, but they no longer sting. The original dynamic range has been expanded, but not so much that expanded distortion becomes noticeable (see the review of a live Mengelberg set in our previous issue). To my ears, this CD now sounds more like Bruno Walter’s 1949 Columbia LP “Eroica” with the same orchestra than Victor’s 1930 78s. This has become an “Eroica” to reckon with, rather than just an historical artifact. Imagine what Obert-Thorn will be able to do in 2034!