"A truly admirable recording from all points of view" - The Gramophone, 1947

The untimely death in 1950 of pianist Dinu Lipatti, struck down with cancer at the age of 33, robbed the world of one of the great pianists of the century. His few recordings were largely made between 1947 and 1950 and thus fall into that tight time period where truly high fidelity recording was beginning to emerge from the restrictions of the 78rpm era. Extracting the most from these recordings today is not a simple matter - the Sonata here was cut directly to 78rpm disc, and much work has been undertaken here to cut wow and flutter, reduce surface noise, and above all bring out the full, rich tone of the instrument, something that's barely apparent on many previous transfers.

The Concerto comes from a 1950 broadcast recording that emerged after EMI had inadvertently issued a fake of the same work under Lipatti's name. It too has suffered in the past from poor sound quality - the review of one previous issue in Fanfare magazine included the following lines: "The sound is awful: no matter what volume I set it at, it sounds too loud. The playing is sublime. I am certainly glad to have heard even the first notes of Lipatti’s entrance in the second movement. Hearing those limpid phrases, one forgets for a moment the distorted sound..." Happily this is most certainly not the case in this new, XR-remastered edition! 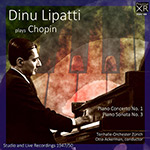 An essential purchase for anybody interested in the work, or the legacy of a great artist

EMI originally issued a Piano Concerto No. 1 with Lipatti that was published in the U.S. as one of the early releases on its budget Seraphim label (60007). It was discovered later to have been mislabeled, and the pianist was actually Halina Czerny-Stefanska. Years later a radio transcription of a genuine First with Lipatti was uncovered, dating from 1950. It’s been criticized repeatedly, and deservedly, for distortion, distant miking, and compression—an automated decrease in volume during loud passages, and increases in volume during soft ones. Attempts have been made to repair the original sound since then. One in particular involved well-intentioned but misguided punching of some bass frequencies through the roof in the belief that this would give more body to Lipatti’s piano. It didn’t.

Pristine’s remastering is certainly more far subtle than that, and more effective. Distortion has been minimized, the painful flutter that afflicted the piano at times reduced to bearable levels. Frequency balance is better overall, and the piano sound has somewhat greater focus. It is now possible to hear variations in dynamic levels in Lipatti’s playing, as well as details of phrasing. The pianist’s pellucid tone can actually be caught in some of the solo passages of the second movement, rather than half-imagined into being. This isn’t a miracle cure, but it is quite an improvement.

If Pristine’s version of the piano sonata is less dramatic of an improvement over other issues, that’s because its sound wasn’t as problematic from the start. Still, the wow and occasional flutter of copies I’ve heard over the years (especially on the Opus Kura release) are gone, and the piano tone is more rounded, less flat, with hints of richness in the bass. The studio ambiance isn’t as dry, and the hiss level reduced without any evident loss of top.

Were the sonata being offered with something less compelling, I’d still recommend this disc for what Pristine has achieved. But the remastered piano concerto makes this an essential purchase for anybody interested in the work, or the legacy of a great artist. Strongly recommended.