This volume is the third of five which will reissue, for the first time in one series, the complete symphony cycle which English Columbia commissioned to commemorate the centennial of Beethoven’s death in 1927. The first four symphonies were assigned to British conductors (Henschel, Beecham, Wood and the Northern Irish Harty) while the remainder were given to Weingartner, already generally acknowledged as a Beethoven specialist.

Oddly, even though he had already recorded a complete acoustic version of the Fifth Symphony three years earlier, Weingartner was not Columbia’s first choice for their Centennial series. On November 19th and 22nd of 1926, Bruno Walter led the (old, pre-Beecham) Royal Philharmonic in their first electrical version. Copies of the shells were even shipped to Columbia’s American affiliate before the recording was cancelled on January 24th of the following year and the matrices destroyed. Four days later, Weingartner began recording the version heard here.

As he did in his 1932 set with the British Symphony Orchestra (but not in his recordings of 1924 and 1933), Weingartner here omits the first movement repeat. But the most anomalous feature of the present version is the incredibly swift tempo of the second movement, which starts at ♪ = 96, faster even than Beethoven’s metronome marking of ♪ = 92. This movement beats his final recording by nearly two and a half minutes – 7:30 vs. 9:55 (not counting the pauses after the tracks). Almost certainly, this was due to Columbia’s enforcement of a four-minute limit on the duration of the sides of their early electrical recordings.

That same reason would account for the Pastoral’s 33 minutes being lavishly spread over ten 12-inch sides. The brief duration of the symphony is due not only to similarly fast tempi, but also to the omission of all repeats. Although Weingartner had begun an acoustic recording of the symphony in 1924, it was never completed; and, alone among his 1926/27 series of the Fifth through the Ninth, this one was not re-recorded by him in the 1930s. Of particular note is his handling of the brass in the last movement, bringing it to the fore in passages where most conductors keep it as accompaniment.

The sources for the present transfers were American Columbia “Viva-Tonal” pressings. While these are usually the quietest versions available, a higher-than-average amount of surface noise will be noticeable, particularly in the Fifth Symphony. The best portions of multiple copies of the recordings were used for transfer, so it is possible the noise may be inherent in the masters. The severe speed fluctuations of the originals have been corrected through the application of Celemony Capstan, allowing the performances to be heard with rock-solid pitch for the first time since the original recording sessions. 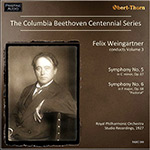 This disc is one of a Pristine line making available recordings issued as part of the Columbia Beethoven Centennial series. An earlier disc of symphonies 3 and 4 is reviewed here.

An unusual feature in comparison with later recordings of the Pastoral Symphony is the small body of strings used. This brings to the first movement, ‘Pleasant, cheerful sensations awakened on arrival in the countryside’, informality and intimacy. At the same time Weingartner points up the rhythmic life, clarity and flexibility of Beethoven’s phrasing. The opening is unfussy yet has a skip and lilt. Most of all there’s a sense of the movement’s eagerness of awakening, notably in the whirling violins in the tuttis. The second theme (tr. 5, 1:07) has an easy glide but the clear bass gives it rusticity. In the development the bass generates expectation which culminates in thrilling fortissimo climaxes. These are followed by alternating peaceful and affirmative passages. Given that the general progress is temperate, such contrasts fully make their effect. The horns’ exciting take-up of the second part of the second theme from 6:04 is particularly satisfyingly realized in relation to the overall texture.

I compared the 1937 recording by Arturo Toscanini with the BBC Symphony Orchestra (Naxos Historical 8.110877). Toscanini provides more detailed dynamic contrast and dramatization. His tuttis have more gusto but his fortissimo passages stand out less markedly than Weingartner’s. Toscanini has a more rounded body of sound but Weingartner offers fine vertical clarity of ensemble. Neither recording makes the exposition repeat.

Weingartner’s ‘Scene by the brook’ is the most magical account I’ve ever heard. It’s a swiftly flowing stream, appropriately enough given Beethoven’s marking Andante molto mosso, but of equal significance is the gentleness of articulation and manner. Weingartner obtains an unaffected ease of cantabile expression aided by occasional, affectionate touches of portamento in the strings. The score with all its ornaments and activity looks fussy yet Weingartner reveals it in lucid transparency. Late on, the clarinet’s version of and cadenza on the opening theme is delivered with unsurpassed joyous eloquence. The coda’s birdcalls have never been more unassumingly fresh. Toscanini’s is also a beautifully played account, with a fuller tone, a more intent, searching and emotively shaped appreciation where Weingartner lets the movement flow contentedly. Toscanini makes you more aware of its structure, at the cost of less freely expressive woodwind solos.

Toscanini’s larger orchestra is, however, preferable in the ‘Merry gathering of the country people’, bringing more exuberance to the Minuet opening, yet a more realistic, harder-toned trio headed by oboe depicting the village band. The rustic dance has more gusto and enjoyment. Weingartner is niftier, lighter. His Trio (tr. 7, 0:49) is incredibly virtuosic for a homely band. The descending clarinet cascade (1:11) is barely capable of articulation although the lively rhythm of the rustic dance is clear. There’s also more tension because Weingartner omits Beethoven’s written-out repeat of the entire minuet and trio before the coda (Bärenreiter urtext bars 204-405) - the folk in panic from the outset.

Weingartner’s ‘Thunder. Storm’ (tr. 8) however, outclasses Toscanini’s in its greater sense of urgency and alarm, owing to a faster tempo, 3:05 against 3:27. The fortissimo strings at 0:21 are especially exciting, but this is the moment when the timpani should also be heard as this is the only symphony in which Beethoven keeps them silent for the first three movements to give them maximum impact now. It’s a recording problem: they are only heard at 2:42 when only the lower strings are otherwise playing. The other instruments entering for the first time in this movement, the piccolo and trombones, are clearer in Weingartner’s recording than in Toscanini’s.

In the finale, ‘Shepherds’ Song: Beneficent feelings bound with thanks to the Godhead after the storm’, Weingartner is more uplifting in spirit because of his greater fluency. His timing is 7:49 against Toscanini’s 8:56. Weingartner’s first violins’ first statement of the opening theme is more humble yet natural, where Toscanini lingers lovingly. Weingartner’s tutti repeat has a sunny grandeur but this is also clearly playing from the heart. As restoration engineer Mark Obert-Thorn points out in his inlay card note, Weingartner has the brass unusually prominent in the tuttis, but in context for me this satisfyingly emphasizes a whole community giving thanks. Toscanini’s account also has great fervour, but there’s an element of rhetoric about it too which takes away something of the joy with which Weingartner completely invests the movement, unselfconsciously glorying in its finesse.

That same small body of strings used in the Fifth Symphony is far less successful than in the Pastoral. The rigour of the work really needs more heft. Weingartner’s virtues as an interpreter remain consistent. This is a fluent and neat account, but it seems rather distant and wanting in tension. The musical line in the development of the opening movement (tr. 1, 1:36) is especially clear but the proceedings lack fire. The adagio oboe solo (3:22), a moment of poise and expressiveness, stands out from the rest. I compared Weingartner’s 1932 recording with the British Symphony Orchestra (Naxos Historical 8.110861) which has more edge, momentum and involvement. The quieter moments are more airily reflective too, so there’s more contrast. Neither recording makes the first movement exposition repeat. A pleasing feature of both recordings, after the horns sing out their variant of the opening motto theme, is the contrast between the first violins’ comment (0:57), played with portamento, and the clarinet and flute echoes, played without. Violins today don’t play Beethoven with portamento, but would he have expected it? It was beginning to be used in his time but its use seems to have only become common after his death.

1927’s second movement takes 7:36 against 1932’s 8:36 but Beethoven’s marking is Andante con moto. There are gains and losses. In 1927 the main theme seems more unassuming — the moving into C major at the end of its second strain is more jubilant than triumphant. The construction of the movement is more transparent without detriment to its musicality. The opening theme which is at first nonchalant is finally an affirmation. In 1932 the progress is more careful but also more caring and the greater space to breathe brings more glowingly reflective woodwind contributions.

The 1927 Scherzo starts with a suitably questioning opening, but its main material doesn’t quite catch the intended return to the grimness of the first movement. The Trio (tr. 3, 1:42) offers a wonderfully dexterous tiny body of cellos and double basses, highlighting the return of C major. However, come the return of the Scherzo the crescendo into the finale isn’t tense enough. The 1932 recording has a more questioning opening by observing better Beethoven’s poco ritardando markings at the end of the first two phrases. It also has a more insistent Scherzo and a Trio which has more of a twinkle in the eye and a jollier close. The deconstruction of the Scherzo as it returns is more humorously surveyed.

The 1927 finale opens a touch stiffly. 1932’s has more zip from the outset, partly because of its larger body of strings. 1927’s is simply inadequate for effectiveness albeit the internal balance is good. Its coda is also just slightly too fast for the articulation of the piccolo’s semiquaver ascents to be clear. Both recordings omit the exposition repeat.

In sum, then, on this CD there’s a marvellous Pastoral symphony but a Fifth that rather falls into the category of a historical curiosity.