Piatigorsky's recording of Willam Walton's Concerto for Cello and Orchestra, which the cellist had commissioned and given the work's first performance of just days before this recording was made, also with the Boston Symphony Orchestra under Munch was criticised at the time for its recording balance - the Gramophone's reviewer noting that: "Piatigorsky is throughout made to sound as close to us as he would be to the conductor in the concert-hall, and the result is a completely unnatural balance between soloist and orchestra." I am inclined both to agree and disagree with this diagnosis - the balance between soloist and orchestra is good, in my opinion, yet Piatigorsky does sound curiously exposed in the original.

This, I believe, is partly a result of the tonal balance of the recording cutting some of the lower-end warmth of the cello, leaving it a little disembodied, thin and stark. It's also a rather dry recording, thus exacerbating this problem - like the human voice, the cello responds well to complementary acoustic resonances in the performance space, and here they were lacking, leaving the instrument sounding rather disconnected. These are both shortcomings I've tackled in this XR remaster, and I think most listeners will agree that a most delicious sound is the result - lively, crisp and well-balanced.

The Dvorák, although a more successful recording to begin with, saw similar criticisms upon its release, and here we find similar improvements in top end clarity and lower-mid warmth - especially in the solo cello - as well as overall balance perception.

Producer and Audio Restoration Engineer: Andrew Rose
Cover artwork based on a photograph of Piatigorsky 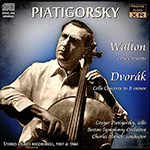 1. "First of all I must say how glad I am that Walton’s ’Cello Concerto is at last available on records in this country. I don’t think that it is an entirely successful piece: in the first and second movements he manages to give a convincingly fresh treatment to material that has fascinated him ever since the Viola Concerto of 1928-9, but l am more than ever sure that the third movement is broken-backed; it is in the form of variations-plus-coda, but the two longish passages for the solo ’cello do not keep the argument going, and there is no inevitability about the return of the main theme from the first movement, only a feeling that Walton could not think of anything better. Nevertheless it is an accessible work by a distinguished composer, and the British public should not have had to wait so long for a recording of it that has been available for some time in America.

Unfortunately I have to modify this welcome straightaway with a complaint about the recording—a complaint that I am getting as tired of making as I am sure you are of reading. Piatigorsky is throughout made to sound as close to us as he would be to the conductor in the concert-hall, and the result is a completely unnatural balance between soloist and orchestra. It is not that we don’t want to hear the details of Piatigorsky’s magnificent playing; they are well worth listening to, and I am sure that professional ’cellists will be torn between envy and admiration at the masterly way he deals with the technical difficulties Walton has provided for him. But neither this concerto nor Schelomo on the other side is a mere display piece. To over-emphasise the soloist’s contribution in this way ruins the continuity of the musical argument, and I am driven to the conclusion that whoever agreed to this microphone-balance had no real understanding of the music.

Against these mechanical faults (and one or two others, such as obvious tape-joins and changes of level) must be set the quality of the performance, and as I have already suggested, Piatigorsky is almost beyond praise. It was he who commissioned this concerto in the first place, and he gives the impression of loving every note of it. The orchestral playing is also technically as good as one would expect, and if there is a certain lack of sensuous warmth about it this may well be the fault of the recording. Schelomo demands the very greatest intensity from the strings at climaxes, and that is certainly what we get here. All in all, then, this is a record that is well worth having for the sake of the music and the performance, but one that could have been much more pleasing to listen to."

2. "My second Boston disc features the distinguished Russian cellist Gregor Piatigorsky as soloist in a first recording of a work written for, and dedicated to, him—Walton’s Cello Concerto. It was recorded on January 28th, 1957, three days after the first performance, and has all the freshness of inspiration that characterizes premiere recordings. Both Munch and Piatigorsky seem tuned to Walton's bitter-sweet lyricism and the Boston strings in particular play most beautifully, especially in the third movement, an ‘improvisational’ set of variations (which last as long as the first two movements put together) with a haunting epilogue. The sound is remarkably good and much better than on the LP.

The coupled Dvorak Concerto, which establishes a very close rapport indeed between conductor and soloist, is less well balanced. Here, the microphones are rather too close to the cello, revealing that the soloist’s intonation is not always quite immaculate. That said, the whole performance has an introspective poetic feeling, of music being born on the wing as it is played, which is not to imply any lack of ardour. The orchestral sound is vivid and, again, the remastering is impressive."

The Walton is capable of thriving with several different approaches and, needless to say, it does with Piatigorsky and Munch

How nice: What may be my two favorite cello concertos, though not necessarily my favorite performances of them, on one very good-sounding CD. I wonder how many of our readers have nearly twice as many recordings of the Walton Concerto as they do of the Dvořák, which is the case with me. Gregor Piatigorsky commissioned the piece and gave the world premiere in Boston, with Charles Munch conducting, in 1957. Shortly thereafter, they recorded it for RCA; the LP coupling was Bloch’s Schelomo. When it was transferred to CD, it was coupled with the Dvořák Concerto. Piatigorsky’s grandson, himself a cellist, told me that, when they digitalized the recording, for some reason RCA used an outtake of one of the two last movement cadenzas that had a mistake in it. I assume that Andrew Rose used the LP to make this fine CD. The first movement begins with a long, meandering theme that returns throughout the movement sometimes echoing themes from the orchestra. Walton stirs things up into an agreeable stew. Like his earlier Viola and Violin concertos, this one has a flashy, tricky Scherzo framed by outer movements that, at least, start at moderate-to-slow tempos. For contrast, Walton offers a slower theme that evokes Kurt Weill’s “Speak Low.” The last movement is a theme and variations (Walton calls them “improvisations”), two of which take the form of solo cadenzas. It’s a striking touch. Then, as in his previous two string concertos, Walton ties things up with a reminiscence of the opening theme.

In preparation for this review, I auditioned nine recordings: Műller-Schott/Previn, Ma/Previn, Cohen/Litton, Starker/Slatkin, Lloyd Webber/Marriner, Wallfisch/Thomson, Hugh/Daniel, Fournier/Walton, and (Jamie) Walton/Briger. Actually, I could live with any of them, from the expansive Hugh/Daniel and Cohen/Litton to the restrained Lloyd Webber/Marriner to the austere Starker/Slatkin to the hard-driving Fournier/Walton. Like almost any good piece, the Walton is capable of thriving with several different approaches and, needless to say, it does with Piatigorsky and Munch. The cellist’s big hands easily encompass the fingerboard, his bowing arm is true, and he handles all the solo trickery that Walton throws at him with dispatch. Munch provides an aggressive accompaniment which supports his soloist quite nicely. Although Piatigorsky believed in the piece, he was dissatisfied with the subdued ending and wanted something more decisive. Walton eventually accommodated him, but the cellist died before he could perform it. Basically, the change involves the insertion of a brief louder passage for the orchestra before the Concerto fades out quietly. It’s really not much of a change but, for the curious, Jamie Walton (presumably no relation) was enterprising enough to record it. On his CD, you can also program the piece to conclude with the original ending. Given that I like all the performances, I suppose couplings would be decisive if I didn’t want multiple recordings.

Most Fanfare subscribers, I would imagine, already have at least one recording of the Dvořák Concerto. He actually wrote a much earlier one, but the B-Minor Concerto is so dominant that it’s simply referred to as the Dvořák Cello Concerto. I suppose many people know that one of the stimuli that brought the piece about was Dvořák’s attendance at the world premiere of the Cello Concerto No. 2 by his colleague at the National Conservatory in New York, Victor Herbert. Brahms was so taken by Dvořák’s piece that he reputedly said that, if he had known one could write such a good cello concerto, he might have written one himself. I realize that our reactions to performances are largely subjective. Objectively, I can hear that Piatigorsky is the master of his instrument and that Munch and the Boston Symphony provide a strong, spirited accompaniment. Subjectively, the cellist’s performance strikes me as jaded, as if he’s played the piece so much that he’s almost on automatic pilot. I’m sure he wasn’t, but I was unmoved by what I heard and I suspect that, while the piece obviously engaged his formidable abilities, it failed to engage his sympathies. I may be wrong, but there it is. Given the number of recordings of this Concerto that are available, I wouldn’t even dare to recommend one but I think this one, for all its obvious virtues, resides somewhere in the middle of the pack.

This article originally appeared in Issue 37:5 (May/June 2014) of Fanfare Magazine