Yevgeny Mravinsky made these recordings with the Leningrad Philharmonic Orchestra for DGG whilst on a tour of western Europe in the autumn of 1960 in sessions which took place in London (Symphony No. 4) and Vienna (Symphonies 5 & 6). Although regarded still today as pillars of the recorded canon, reviews both upon release in 1961 and, quoted here, upon reissue in the 1970s, found something lacking sonically. Likewise contemporary reviews of the currently-available DGG CDs.

My aim in carrying out a 32-bit XR remastering of the recordings was to see whether a harmonic rebalancing of the recordings might serve to eliminate these reservations, and I'm pleased to report that substantial improvements have been possible. The sound of the originals was unusually boxy for 1960, with a rather constricted top end and a lack of real depth in the bass. All three of these shortcomings have been resolved here, bringing an even greater sense of immediacy and realism to these fabulous performances.

Producer and Audio Restoration Engineer: Andrew Rose
Cover artwork based on a photograph of Mravinsky 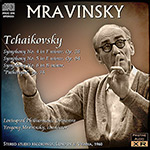 Download Artwork
Download Artwork
1. "Turning to the Mravinsky performances one is in another world. They tingle with the excitement and electricity that a great live performance generates. His record of No. 4 has tremendous personality even if it is not without idiosyncratic touches. Although the brass in the Leningrad orchestra has a tendency to blare at times, the fact remains that the refinement and imagination that informs the string playing and the beauty of their phrasing puts them in a class of their own. Mravinsky's approach is carefully thought out and his shaping of the architecture, though at times personal, has the merit of greater organic logic. Some of the dynamic markings are not scrupulously observed but microphone placing may account for some of this..."

2. "Mravinsky's accounts of the late Tchaikovsky symphonies have tremendous tension and virtuosity, a sense of spiritual commitment and emotional power that are quite out of the ordinary. Even when, as happens at one point in the first movement of the Fourth Symphony, he ignoes the dynamic markings he does so with such conviction that you are left with the feeling that he is right. These transfers seem to me as every bit as good as the originals that I played relatively recently (I have only sampled these copies) and although my allegiance to Mravinsky's earlier record-now deleted-with the Leningrad Philharmonic of the Pathetique remains unshaken (DGM18334, 2/57), this later version is still one of the most moving and thrilling accounts of the work committed to record. These performances radiate a tremendous power, a sense of truth and authenticity of experience and they remain for me at any rate among the classics of the gramophone."

There’s real openness now and a sense of space in the hall and around the instruments, and the violins now soar upward into the stratosphere as if relieved of the gravity that was previously holding them captive

This is a bit of a departure from Andrew Rose’s usual fare; at least it is from among his remastered Pristine recordings I’ve personally received for review. For this release, Rose has left behind the electrical, acoustic, and 78 recordings of yore, and traveled, as if by time machine, all the way into the era of modern stereo technology; for these are the famous, indeed legendary, Tchaikovsky symphony performances recorded in 1960, in stereo, by Yevgeny Mravinsky while on tour with the Leningrad Philharmonic. The Fourth Symphony was recorded at Wembley Town Hall in London in September of that year, while the Fifth and Sixth symphonies were recorded two months later in the Großer Saal of Vienna’s Musikverein. These are the performances that have been long available in a two-disc Deutsche Grammophon set (419745), though they have been issued and reissued countless times in various configurations by both Deutsche Grammophon and other labels.

Though this is the first time I’ve had the opportunity to review Mravinsky’s Tchaikovsky myself, I’ve consistently cited the conductor’s performances of the symphonies as referential benchmarks when reviewing other versions of these scores, and I’ve steadfastly maintained my belief that they belong in the collection of anyone who’s serious about this music. Mravinsky managed readings of these works that benefit from tense, taut, high-voltage performances, while simultaneously maintaining strict discipline so that Tchaikovsky’s neurotic emotionalism remains under control. The result is music-making that delivers tremendous dramatic punch, all the more so for its feeling of pent-up energy always on the verge of exploding.

In his producer’s note, Rose cites limitations in the original mastering of these recordings, and states, “My aim in carrying out a 32-bit XR remastering of the recordings was to see whether a harmonic rebalancing of the recordings might serve to eliminate these reservations, and I’m pleased to report that substantial improvements have been possible. The sound of the originals was unusually boxy for 1960, with a rather constricted top end and a lack of real depth in the bass. All three of these shortcomings have been resolved here, bringing an even greater sense of immediacy and realism to these fabulous performances.”

Since I’ve had the original mastered-for-CD Deutsche Grammophon set in my collection for years, it was easy to compare it to Rose’s restoration effort to hear how much of a difference, if any, actually exists between them. First, I will say that I think I know what Rose means when he describes the sound of the original source recordings as “boxy.” It’s a bit dead, as in having little or no air or atmosphere around it, and there’s little front-to-back dimensional depth. I would also agree that frequency-response-wise, the high end is a bit constricted or attenuated.

These two deficiencies have indeed been compensated for, quite remarkably so, I’d have to say, in Rose’s refurbishment. There’s real openness now and a sense of space in the hall and around the instruments, and the violins now soar upward into the stratosphere as if relieved of the gravity that was previously holding them captive. The one aspect on which I’m not sure Rose has improved much, if any, is the bass response. Maybe it’s just a function of our individual hearing, but my Deutsche Grammophon CDs reproduce the low bass firmly and with satisfying impact. I honestly can’t say I hear a significant difference in the low-register department, which, to my ear, was never really deficient to begin with.

The other noted improvements, however, are very welcome and more than enough to warrant a strong recommendation for this release.