This release presents the works of one of America’s most popular and enduring music theater composers as performed by three of America’s première symphony orchestras. On November 15, 1954, Rodgers conducted the New York Philharmonic in a benefit concert of his own music. So enthusiastic was the reaction that Columbia Masterworks head Goddard Lieberson arranged for a studio recording to be made the following month.

The first selection, “Slaughter on Tenth Avenue,” had originally been choreographed by George Balanchine as the ballet finale of the 1936 Rodgers and Hart Broadway show, On Your Toes. (In an interesting coincidence, the lead actress and dancer of the 1939 film version of the show was Vera Zorina, who was Lieberson’s wife at the time of this recording.) Rodgers leads an electrifying reading of the score, aided by such distinguished Philharmonic soloists as cellist Laszlo Varga and flutist John Wummer.

For the 1952 NBC television World War II documentary series Victory at Sea, Rodgers contributed twelve themes which were then expanded and orchestrated by longtime Broadway arranger Robert Russell Bennett to fill out 26 half-hour long episodes. The music proved to be quite popular in its own right: Bennett went on to conduct four LPs’ worth of its soundtrack for RCA; and one of the themes became a hit song (“No Other Love”) after it was given lyrics and interpolated into the 1953 Rodgers and Hammerstein musical, Me and Juliet.

The waltz sequence that follows is drawn mainly from the Rodgers and Hart catalog, save for the final selection from the first Rodgers and Hammerstein musical, Oklahoma!, and well-known orchestral excerpts from two more R&H musicals follow.

Three years to the day before Rodgers recorded his LP, light music specialist Andre Kostelanetz led the Philadelphia Orchestra “Pops” (which, according to the original liner notes, “is nothing less than the peerless Philadelphia Orchestra in holiday mood”) in a recording session which included a suite from South Pacific and a shortened, much differently orchestrated version of “Slaughter on Tenth Avenue”. (Note the use of string pizzicati in the jazzy, upbeat section toward the end, rather than the brass used on the Philharmonic recording, a choice perhaps intended to play to the strengths of the famous Philadelphia strings).

The final selection presents legendary conductor Fritz Reiner in a rare foray (on disc, at least) into American repertoire. While his dynamic reading of the Carousel Waltz is more than a minute faster than the composer’s recording, he shows a perfect understanding of the Broadway style. Surprisingly, neither Columbia nor its successors ever reissued this recording in any long-playing format, and it is transferred here from a shellac 78 rpm disc.

Producer and audio restoration engineer: Mark Obert-Thorn
Cover artwork based on a photograph of Richard Rodgers 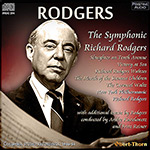 If you do love the Rodgers musicals, no album could be more recommendable.

Paul Weston wrote that “in the writing of American popular songs, there are songwriters; and then there are composers.” Richard Rodgers was a composer. Even when divorced from their wonderful lyrics by Lorenz Hart and Oscar Hammerstein II, Rodgers’s songs retain their freshness and allure in purely orchestral garb. When he wrote solely for orchestra, Rodgers’s touch was sure and very much his own. In all his music, there is an undertone of melancholy that he shares with the great Viennese operetta composers and which expresses a depth of feeling when played by a symphony orchestra. When Rodgers stepped before the New York Philharmonic at Carnegie Hall on November 15, 1954, he was at the peak of his popular success. The recording these artists made the following month is a classic of American music. What kind of conductor was Rodgers? Basically, he was a theater conductor, and a very good one. The main idea of each selection always is in the forefront, and the rhythmic underpinning unfailingly is expertly projected. Rodgers’s transitions are marvelous; no one has given us his music with a better sense of structure. He gets a rich and varied sound out of the New York Philharmonic, which probably was at its peak during the early Mitropoulos years—both collectively and in the playing of its first chairs. This orchestra has a history of playing well for composers it respects. This album is a reminder of a time when the popularity of Rodgers’s music crossed all boundaries in American culture.

“Slaughter on Tenth Avenue” was an Arthur Fiedler specialty. His stereo recording of it is vibrant and elegant, but Rodgers’s version reaches deeper. The dark Philharmonic strings bring out the pathos in the second subject, while concertmaster John Corigliano’s solo in its reprise is touching. The brass go to town in the big band music. Producer Mark Obert-Thorn points out that one of the tunes in the Victory at Sea suite became the pop number No Other Love, which I know from a torrid Perry Como recording. Rodgers’s light touch at the start of the “Guadalcanal March” shows his skill as a conductor. The chorale toward the suite’s end receives very moving playing. In Richard Rodgers Waltzes, strands of all four tunes mesh to make a wonderful introduction. Rodgers’s decisive tempos illuminate these waltzes in much the same way as Franz Lehár’s conducting did for his waltz numbers. Trumpeter William Vacchiano is highly persuasive in the lyric to “Oh, What a Beautiful Morning.” The first of the waltzes, “Lover,” receives a very different but highly entertaining rendition by Jack Sheldon on his “Hollywood Heroes” album. In “The March of the Siamese Children,” Rodgers gets plenty of oriental color out of the winds and brass. At the beginning, flutist John Wummer’s playing is highly evocative. Producer Obert-Thorn makes sure we hear the full effect of the gong. Finally Rodgers’s traversal of “The Carousel Waltz” is weighty and lush—Broadway romance at its best.

The additional items on the CD are highly worthwhile. In the South Pacific suite, Andre Kostelanetz draws peerless playing from the Philadelphia Orchestra strings. Flutist William Kincaid is splendid in “Bali Ha’i.” Inexplicably, the suite does not include “I’m Going to Wash that Man Right Out of My Hair”; did arranger Robert Russell Bennett find it less memorable? Kostelanetz presents an abbreviated and reorchestrated version of “Slaughter on Tenth Avenue” which is still effective, showing off the Philadelphia strings. If you are surprised that Fritz Reiner recorded “The Carousel Waltz,” recall that he also commissioned Bennett’s arrangement of music from Porgy and Bess. Reiner’s waltz is tidier and more virtuosic than the composer’s, although with too much of a whiff of Vienna. Obert-Thorn’s remasterings are generally admirable. Rodgers’s recording sounds full and detailed, although slightly cramped—probably a feature of the master tape. The Philadelphia session from three years earlier sounds better, with superb balance. Reiner’s 78 features somewhat limited audio, but still is pleasant to listen to. You don’t have to love Broadway musicals to appreciate Rodgers’s recording. It includes some of the most universally appealing American music, affectionately conducted and played. If you do love the Rodgers musicals, no album could be more recommendable.