Stravinsky's first recordings of his Rite of Spring and Firebird Suite

Igor Stravinsky’s career as a recording artist began in 1925 with a series of acoustic piano solo sides for American Brunswick which were never released. His first issued records were made by Columbia in London, a Petrushka Suite recorded in June of 1928. Five months later, Columbia’s French affiliate recorded the Firebird Suite presented here, with an uncredited ensemble believed to be the Walther Straram Concerts Orchestra. Stravinsky chose to record the 1911 version with the addition of the Berceuse and Finale from 1919 (although the bridge linking them is missing), as well as interpolating the trombone glissandi from the 1919 version in the Infernal Dance. The present composite version gives a more fully rounded picture of the action of the ballet and the fairy-tale aspects of the plot.

While the Firebird Suite and even the complete Petrushka had already been recorded more than once before Stravinsky made his own versions, The Rite of Spring had a longer gramophonic gestation. The first attempt was in April, 1927, when Leopold Stokowski set down the first three sides of an aborted complete recording with the Philadelphia Orchestra. Extant test pressings suggest the ensemble had not played the piece for awhile, as the execution is uncharacteristically scrappy. Sixteen months later, portions of the work were set down during an August, 1928 rehearsal with Eugene Goossens leading the Hollywood Bowl Orchestra as part of a balance test that eventually saw publication on CD.

Finally, the first two complete recordings of the work were made in Paris in 1929. Pierre Monteux, the conductor of the 1913 première, recorded it for French HMV in January (on Pristine PASC 219), while the composer set down his version for French Columbia that November. In the meantime, Stokowski had begun his issued recording in September, 1929, although it would not be completed until the following March. These three would become the only recordings of the work through the end of the 1930s.

While Stravinsky’s ensemble is less precise, and his direction is less assured, than in his 1940 remake with the New York Philharmonic, the recording affords a valuable glimpse of how the composer approached this epoch-making work a mere sixteen years after its première, before familiarity and rising orchestral standards smoothed out the rawness experienced by the outraged opening night audience in Paris a century ago.

The sources for the transfers were first edition American Columbia “Viva-Tonal” pressings. Pitch fluctuations inherent in the original recordings have been corrected in this edition. 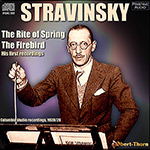 Obert-Thorn and Pristine have done the impossible: this CD is not only listenable, but an effective presentation of a performance which captures much of the excitement of the score

These were Stravinsky’s first orchestral recordings of these works, the Firebird Suite (a conglomerate of the 1911 and 1919 scores) in November 1928 and Le Sacre in May 1929, both by French Columbia in the Théâtre des Champs-Elysées. This Mark Obert-Thorn production supplies complete discographic details. The orchestra in the Firebird Suite was unaccredited but is believed to be the Straram Orchestra that made the Le Sacre recording (per Obert-Thorn).

With such an early electrical recording of Le Sacre, we expect the worst, and this one has sounded that way in the past. Obert-Thorn and Pristine have done the impossible: this CD is not only listenable, but an effective presentation of a performance which captures much of the excitement (if none of the beauty) of the score. Despite the orchestra’s many difficulties, the music blazes away, although some passages do make the listener squirm. Certain details emerge well: the bass clarinet parts in the introduction come across better here than in many digital stereo recordings, and the off-beat chords in “Danses des adolescents” have plenty of punch (at a deliberate tempo). Listening to this performance makes one question more than ever the consensus opinion that the young Stravinsky was a poor conductor: In an era when every conductor and every orchestra had enormous difficulties playing Le Sacre, this is a vital, creditable performance. The playing is often strained, raw, harsh, and imprecise, but that suits the music better than some of the silken, glossy run-throughs we hear today from such great ensembles as the Concertgebouw and the Los Angeles Philharmonic. An important historical artifact has now become a fascinating performance to hear.

The Firebird does not fare as well. The playing is rough and awkward where it should be silky, and the reproduction of the strings is unbearably tinny, gritty, harsh, and shrill. One must state the obvious: that it is good to have a representation of the composer’s first go at an orchestra Firebird on disc, but none of us will ever listen to it a second time. Try his earlier piano roll recording of the complete ballet. James H. North