Bruno Walter, "whose reading may be accepted as authentic", conducts Mahler's 2nd

As with other issues in this series of Bruno Walter's Mahler recordings, Pristine's 32-bit XR remastering system has succeeded in delving deep into the original recording to reveal new depths and new heights. Where previously the brass sounded perhaps a little veiled, now they can be heard in all their blazing glory. Meanwhile the choir opens out wonderfully, making previous issues sound perhaps a little strangled by comparison. Finally the full rumbling majesty of the lowest organ stops can be felt as well as heard to marvellous effect. The Gramophone's reviewer talks about an "apocalyptic" performance - now we can hear it in sound to match that artistic vision.

XR remastering by Andrew Rose at Pristine Audio, April 2013
Cover artwork based on a photograph of Bruno Walter 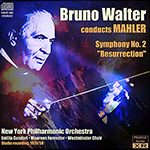 In good time for next year’s Mahler centenary comes a recording which is certain to make a strong appeal to all real Mahler enthusiasts, all the more since it is conducted by the composer’s distinguished disciple, Bruno Walter, whose reading may be accepted as authentic and who clearly loves this music. The Second Symphony, provided by Mahler with a weighty “programme” about life and death, the Last Trump and the resurrection of the dead, and the assurance of a life hereafter (“Sterben werd* ich, um zu leben”), is nevertheless a work which takes a good deal of stomaching. Faced with concepts of such magnitude, Mahler becomes merely grandiloquent: the enormous apparatus he demands—a huge orchestra, with large reserves of extra brass and percussion, organ, chorus and soloists—ends jby becoming unwieldy; the suspicion increases, as the symphony’s vast length unfolds, that it would have been the better for more matter and less art; and it cannot be denied that at the very point where nobility of thought is needed, Mahler (like Strauss in a similar context) falls dangerously near bathos. For all that, beneath all the pomp there lie some characteristically striking and beautiful ideas, and when Mahler, for contrast, reverts to the vein of childhood innocence and naivete—as in the Landler movement - (based on one of the Knaben Wunder horn songs)—he is at his most charming. Indeed, there may be more of heaven here, as seen through the eyes of a child, than in all the alarums and excursions later.

The Klemperer recording which has been the only one available until now was not particularly satisfactory, owing to the general sense of constriction, the restricted dynamic range and the string quality, which tended to sound starved just when it should have been most opulent. The present issue, except for a short patch in the finale where the engineers, not altogether surprisingly, seem to have feared for the safety of their equipment and have brought their fader down a notch or so, is remarkably well recorded, with particularly good balance and excellent quality. Adequately to contain Mahler’s vision of the heavens opening, with trumpets disposed to right and left, near and far, stereo at least is called for (and, in fact, the stereo version exists in America); but even in mono this does not overload. It is Walter’s interpretation, however, which is the real joy of this issue: not only is he more apocalyptic than Klemperer, but in the lyrical passages he brings far more grace to the music. The second subject of the opening movement, for example, has more Viennese charro, without, as in the previous recording, turning into mere goo at the recapitulation; the Landler flows more easily (what lovely singing tone from the ’cellos, incidentally!); and the Scherzo, which before seemed unduly protracted, is taken at a better speed and is more pointed rhythmically. Though one should not forget the wonderfully steady singing of Hilde Rössl-Majdan in the earlier set, the soloists and chorus here are very good, and complete the attraction of this admirable issue.

This is an essential interpretation

Pristine has chosen a striking cover design for this issue to reflect the cosmic nature of the Resurrection Symphony: artwork based on photos from the Hubble Space Telescope is used as the backdrop to the image of Bruno Walter, baton poised. This is a recording that was almost never completed: the sessions were delayed by a year following Walter’s heart attack in March 1957, just after he had recorded the fourth and fifth movements.

Walter’s way with this mighty work has been revered since it first appeared; regarding its musical content, I have nothing much to contribute beyond reiterating the many virtues already commented upon by previous reviewers. This is a recording which belongs in every serious Mahlerian’s collection; the question is whether a newcomer or an established collector should contemplate forking out for this XR re-mastering by Andrew Rose.

I have long been a fan of Pristine’s engineering and just recently extolled the extraordinary clarity and depth which Mr Rose has breathed into the Furtwängler La Scala Ring. I am invariably impressed by what he can do for venerable recordings and I can certainly hear how he has reduced hiss, enhanced lower frequencies and revealed the brass and chorus in greater glory. However, after repeated close comparison with the CBS issue - originally very well recorded by Philips - I cannot in all conscience claim that anyone who already owns it need rush to replace it with this Pristine single disc, especially as the CBS double CD set, offering the First Symphony too, is available at bargain prices. Indeed, occasionally I even felt that that the CBS engineering retained more bite and body than the Pristine version.

Walter’s vision for this work is one of quiet mastery and concentration; there is nothing showy or interventionist about his conducting but under his direction the music seems always to be doing just what it should. He never lingers or indulges and those looking for the equally masterly but very different, slower approaches of Tennstedt or Levine or Klemperer’s more granitic assault, will be surprised. Walter’s version fits neatly onto one disc but he never seems to be rushing. He storms heaven with an orchestra - here correctly credited as the New York Philharmonic, which was originally billed as the “Columbia Symphony Orchestra” for the usual contractual reasons - which plays out of its skin.

The key to the first movement lies in the instruction “maestoso”; Walter maintains a steady, majestic and inexorable stride in this funeral march, but also permits the pastoral interludes to unfold gently, uniting the two moods with a firm sense of purpose. His control is absolute; he knows how to meld the contrasting and conflicting moods into a coherent narrative. When the menacing opening theme returns on the insistent brass, the discords build and build to a thrilling climax at 14:54 before the tantalising offer of consolation subsides into a wholly ambiguous conclusion, reflecting Mahler’s ambivalence about his search for God; Walter displays a wholly convincing understanding of the spiritual dimension of this symphony.

The Andante unfolds with lilt and charm; Walter’s subtle rubato and the singing cello tone effortlessly convey the recollection of happy memories in a past life. This restrained style perhaps carries over too much into the “St Anthony preaching to the fishes” movement, eliciting a criticism from some quarters which has some validity, that he is a tad too blithe and relaxed to capture fully the grim and bitter irony of the saint’s efforts; the music here should sound like a metaphor for the circularity and pointlessness of life’s frustrations, but yet again Walter secures a powerful close to the movement.

“Urlicht” is tender and prayerful, as it should be. Maureen Forrester’s smoky, rich-toned contralto, with its appealing, flickering vibrato, is amongst the very best in this music; only Janet Baker in her many versions and perhaps Jessye Norman for Maazel surpass her. The monstrous finale is simply glorious: Emilia Cundari - a singer with whom, I confess, I am entirely unfamiliar - is silvery and soaring, while Forrester intones her text like the Cumaean Sibyl. The Westminster College Choir is wonderfully expressive, first mysterious, then impassioned and ecstatic. The otherworldly off-stage effects in the “Grosse Appel” are highly effective and in the last ten minutes are amongst the most serene and ethereal of any recording. Consistent with his strategy in directing the whole symphony, Walter makes a slow-burn progress towards an overwhelmingly powerful climax.

Whether you buy it on Pristine or CBS, this is an essential interpretation.