Bruno Walter made three studio recordings of music by Bruckner: the 4th, 7th and 9th Symphonies. Each was recorded during the very last years of his life, with the Columbia Symphony Orchestra (generally believed to consist largely of the Los Angeles Philharmonic) in stereo. As with the two Mahler recordings of the same provenance, released earlier this year as Pristine PASC376, these recordings were well made but - to modern ears at least - have something of a sonic veil over them. This may indeed not be apparent - until one compares the Sony/Columbia releases with these new 32-bit XR-remastered transfers. Suddenly one discovers an immediacy, a fullness of tone, the rasp of the brass, the rumble of the deep bass, the sheer vitality of Walter's orchestra and performance conveyed as never before. The recordings were of course taped, and I've managed to correct some minor pitch drifts throughout the recording, as well as reduce some of the hiss inherent in any analogue recording. But what will impact most on the listener here will be the massive, three-dimensional impact of the performance, the precise detail in Walter's direction, and an unprecedented clarity of sound.

XR remastering by Andrew Rose at Pristine Audio, March 2013
Cover artwork based on a photograph of Bruno Walter 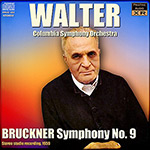 Readers of the correspondence columns of The Listener will have noticed a recent set-to between anti- and pro-Brucknerites, hotly contesting whether or not Bruckner was tedious. What nobody thought to say was that, more than with most composers, his music depends on his interpreters: lack of sympathy with his leviathan scores, or misunderstanding or wilful disregard of their markings (always assuming they are the right scores to start with, and not "improvements" by well-meaning editors) can easily result in performances which stress the naivete, the vast leisureliness, the structural weaknesses to an intolerable degree. When, on the other hand, a Bruno Walter takes charge, the music can flow with an unruffled assurance, a sense of coherence and quiet purpose, a direct eloquence which utterly transforms the work. So sensitive is Walter to the ebb-and-flow of Bruckner's tides of thought that even in such vast movements as the opening one here, or the Adagio which represents the apotheosis of his humble lifelong glorification of God , one forgets to become impatient with their length but is absorbed into the rich romantic texture slowly unfolded. The Scherzo in this performance is taken at an unusually steady pace, which slightly lessens the contrast of tempi intended; but it is so meticulously played, and so lightly, that the effect comes to seem entirely convincing. The Columbia Symphony Orchestra plays admirably throughout, responsive to Walter's every direction; and the result is a truly noble reading. After this Adagio indeed any finale, had it ever been completed, might well have come as an anti-climax. The recording is outstandingly good, in mono as well as stereo; and the change-over which enables the symphony to be contained on only two sides, coming as it does at the da capo from the Trio back to the Scherzo, is at as unobtrusive a point as possible.

This remarkable release has caused me to re-evaluate the performance itself. Urgently recommended.

As the 50-years-and-out-of-copyright rule ticks away in the European Union, and early stereo LP recordings become fair game for remastering and reissue by others, Andrew Rose is venturing to apply his patented XR sonic enhancement program to those as well as to the monaural recordings to which he has previously devoted himself. Generally speaking, the gains to be expected for the former will be significantly less than for the latter, and in virtually all cases Rose also is competing against state-of-the-art remasterings from the master tapes (as opposed to the LP copies used by Rose) by the original recording companies. Nothing daunted, Rose has pressed ahead and advocated for the superiority of his own releases.

In this case, the results fully justify the efforts; what Rose has accomplished here is truly remarkable. I compared his version to both the generally available 1995 Sony “Bruno Walter Edition” release, and to a 2004 Japanese Sony DSD remastering. (Thanks again to Fanfare reader and friend Robert Alps for providing a copy of the latter from his personal collection.) The two Sony releases did not differ greatly, and had compensating advantages and disadvantages. While the DSD version has slightly more depth and a stronger bass register, that brought with it an added degree of overall resonance that resulted in a slight fuzziness and decrease in crispness of sound and clarity of detail when compared to the very clear and well-balanced, but slightly dry and recessed-sounding, original 1995 CD remastering.

By contrast, this version captures the best of both worlds, and then some. Compared to both Sony releases, it has significantly greater presence and weight. The entire frequency range seems more open, but particularly at the bass end, which now finally has the depth and richness of Walter’s live performances that Sony’s recording techniques never really captured. (How I wish that Walter had made all his recordings for Decca instead!) While there is more resonance, it does not in the slightest occlude the textures; indeed, here the string tremolos actually have their clarity increased. The strings also gain heft, overcoming the original paucity in their numbers that was a noticeable shortcoming of the original recording. (Columbia’s engineers apparently feared that the highly reverberant acoustics of the American Legion Hall in Hollywood, where most of Walter’s stereo recordings were made, would result in a sonic bouillabaisse if a full complement of strings was used.) So too do the brass, which now have both a more burnished sound and a degree of bite not noticeable before, while the woodwinds have greater color and presence.

Indeed, this remarkable release has caused me to re-evaluate the performance itself. Avid Walterian though I am, I have always felt the conductor’s recordings of the Bruckner symphonies to be a relative weak point in his discography, with this release being the least felicitous of the lot. (Most critics have highly praised the Bruckner Seventh in Walter’s discography; my vote has been for the Fourth as his best of the three studio recordings.) Compared to my personal benchmarks of Furtwängler and the Jochum brothers (Georg-Ludwig as well as Eugen), Walter’s readings lack the apocalyptic intensity of the former and the celestial splendor of the latter, having instead what Mortimer H. Frank once termed a “buttery” quality due to the autumnal warmth and gentle lyricism typical of the conductor’s stereo efforts. At 59:03 (Sony’s release times out at 58:45 instead), this studio account is far slower (by 9-10 minutes) than any of the five live performances by Walter that have seen the light of day (not to mention a laser beam) on compact disc. (See my comments in 36:3 on all eight of Walter’s surviving Bruckner Ninths.)

Previously, I have tended to find this version too soft-grained and even somewhat ponderous and flaccid. But now, perhaps contrary to expectations, the additional richness of sound has revealed the performance to have a weighty, muscular strength that was heretofore veiled; in particular, the final minutes of the first movement build to a monumental, thrilling climax with floor-vibrating bass frequencies. (At one point while it played I walked downstairs to retrieve something, and those vibrations were transmitting down to the wood paneling in the basement.) Likewise, the mighty tread of alternately descending and ascending passages of eighth notes in the Adagio now has a powerful forward momentum that previously seemed absent. While still not anywhere near my favorite Bruckner Ninth (Eugen Jochum’s 1955 DG recording has a secure lock on that post), this is now one to be highly regarded, with my previous reservations now largely obviated. My one extra-musical caveat is with the garish trademark computer-enhanced colorized tray card photos that Rose produces; the one of Walter here is so ghastly that he looks as if he belongs in a horror film line-up with Boris Karloff and Bela Lugosi.

However much science and technology goes into it, audio remastering ultimately remains an art of subjective judgment. There will always be a question of whether and to what extent the result has revealed previously obscured detail or subtly altered the interpretation itself. As taken as I am with this new release, I can imagine another listener preferring one of the Sony issues instead. But if your judgment is open here, or if like me you previously found this recording less than fully satisfying, definitely get this version; urgently recommended.