Ernő Dohnányi performs in rare recordings of his own compositions

The present release brings together three recordings from Dohnányi’s later years which have seen scant, if any, availability in recent decades. The Violin Sonata was recorded with the composer’s friend and frequent recital partner, American violinist Albert Spalding, in 1952, but was not issued at the time, perhaps due to the lack of a discmate. It first came out on LP in 1978, but has never appeared on CD.

The four Rhapsodies have some engineering problems on the original LPs. The first has instances of volume fluctuation which I have attempted to counteract. The third has a brief dropout toward the beginning on the master, and also appears to have a tape tracking problem in the middle which introduces a wobble to the sound. This track also has a section at the end that seems to have been spliced in from a crackly disc source, perhaps a backup acetate. These selections have been unavailable commercially since the demise of the Remington label in the 1950s.

The final work, Dohnányi’s Second Piano Concerto, was apparently only issued in stereo in America on an Angel LP. EMI released its original coupling, the composer’s Variations on a Nursery Tune, for the first time in stereo in the UK on a 1987 LP, but significantly did not pair it with the concerto, nor did it do so on a subsequent CD reissue. It is reasonable to assume that the stereo master is lost or otherwise unusable. The recording did receive one previous CD release on an independent label which some critics characterized as having come from a noisy mono LP source. There is some low frequency popping on the original master tape during quiet passages unrelated to the disc source used here.

Producer and Audio Restoration Engineer: Mark Obert-Thorn
Cover artwork based on a photograph of Ernő Dohnányi

Special thanks to Nathan Brown, Richard Kaplan,
Donald Manildi and the International Piano Archives
at the University of Maryland (IPAM), and Charles Niss 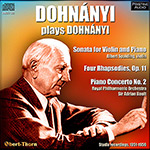 Recommended as a composer’s recording, as a reissue of rare material, and as an example of a playing style that died with Dohnányi’s generation of musicians

What an intriguing CD this is! Incorporating compositions from early (Rhapsodies, 1902–03), middle (Violin Sonata, 1912), and late (Concerto, 1946) periods in Dohnányi’s career, it presents three recordings made in the 1950s by three musicians born in the 19th century.

Taken chronologically: The 1951 Remington recording of the rhapsodies gives us the 74-year-old composer playing works he had composed a half-century before. The playing is extraordinary: No contemporary pianist would dare play this music with the sort of rhythmic flexibility in evidence here. Further, it is clear that getting the proper gesture is more important to Dohnányi the pianist than hitting all the right notes; he still has an impressive technique, but is not loath to produce fistfuls of clams. The works themselves are virtuoso late-Romantic music; despite the title, which suggests four individual pieces, the set forms a cycle in which the main theme of No. 2 recurs in the middle section of No. 3, and No. 4 is a combination of a setting of Dies irae with cyclic recurrences of all three of the previous rhapsodies.

The violin sonata, recorded the following year, features the American violinist Albert Spalding, nephew of the baseball Hall-of-Famer and sporting-goods magnate. Spalding (1888–1953), a frequent sonata partner of Dohnányi late in life, was well past his prime in this recording (as well as in his and Dohnányi’s Remington recordings of Brahms’s sonatas), but his playing is revealing. Not only do we find the same rhythmic freedom as in the rhapsodies, but the extensive use of portamento is something just not heard today. This recording, not issued by Remington, was taken from its first issue, a 1978 Varèse Sarabande LP.

The Second Piano Concerto was recorded in stereo, along with the more famous Variations on a Nursery Theme, in 1956. Its only stereo issue, however, was on Angel Records in the U.S.; that LP was the source used for this transfer. This recording was also reissued on a Praga CD, but that is a horrible-sounding transfer, apparently from a mono source, so it’s good to have the stereo version available again in a good remastering. Despite the later recording date, Dohnányi seems more rhythmically and note-accurate here than in the rhapsodies; perhaps the necessity of staying together with the orchestra reined in his freer inclinations.

Especially considering the problematic source material—early Remington LPs were notoriously noisy and are rarely found in decent condition, and Angel stereo LPs were vastly inferior to the original HMV masters—Mark Obert-Thorn has produced admirable transfers. Recommended as a composer’s recording, as a reissue of rare material, and as an example of a playing style that died with Dohnányi’s generation of musicians.