Arthur Rubinstein is of course associated with the music of Chopin perhaps more than any other pianist of the recorded era, and it's instructive perhaps to note that in both of the reviews quoted here, whilst the orchestral performances are given modest credit, it is the playing of Rubinstein which consistently receives high praise.

These new 32-bit XR remastered transfers have addressed a number of issues in what were very well made recordings for their era. Some pitch anomalies, where different takes have been cut together, have been corrected, and minor tape pitch drift and flutter issues solved. The Gramophone reviewer noted an overly-dry sound to the earlier of the two recordings and a "tinny"sound to the piano; XR re-equalisation has dealt with the latter, whilst a very gentle application of the acoustics of one of the world's finest symphony halls has ameliorated the former. This, together with a careful rebalancing of the upper and lowest frequencies has served to bring a sense of air and dimension to the recording that was at times in somewhat short supply. Overall, then, these two fine recordings have never sounded so good!

XR remastering by Andrew Rose at Pristine Audio, February 2013
Cover artwork based on a photograph of Arthur Rubinstein 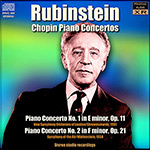 Rubinstein's previous recording of Chopin's E minor Concerto was spoilt by poor quality , and it is a pleasure to report that this great artist has now been recorded as he deserves. He is a little too near the microphone in the stereo version. but you soon get used to it, and the balance on the mono seems better. But piano and orchestra sound fuller and rounder on the stereo although personally I would be very happy to have either.

The orchestra plays the opening music with plenty of life, though the tempo is much too rigid for the sort of performance Rubinstein is going to give, and Mr. Skrowaczewski (of whom I had not previously heard) struck me as a little insensitive. Also his accompanying is unremarkable, the orchestra being a shade behind the soloist here and there. Quite a number of those easily-drowned counter-subjects are audible (though seldom those played by the bassoon) , and probably the orchestral side would have seemed quite good enough for most performances. But Rubinstein's is an exceptional performance. He spreads himself rather more than before, taking his time, brooding on phrases that take his fancy in that wonderful improvisatory way of his, and playing the whole work with such affection and style that you think it one of Chopin's loveliest inventions. Which perhaps it is. The slow movement is a marvel of sensitivity, and there is plenty of brilliance in the finale .

There have been many recordings of this concerto in recent years, but only one other is in anything approaching the Rubinstein class - the Pollini. This was a very remarkable record, the soloist only eighteen years old when it was made. In some ways it is a rather similar performance, very sensitive. with plenty of musical rubato. But then is a detectable difference in the rubato . Pollini's sounds very fresh and young, as might be expected. Rubinstein's is maturer, though I am not sure that that is an advantage in this very youthful concerto. It is hard to choose between the two. Certanly Pollini is better accompanied, and the orchestral opening is more expressively played in the HMV version. If you posses.either of these recordings, you will have some of the best Chopin playing of all time.

Rubinstein last recorded this Chopin F minor concerto with Steinberg and the N .B.C., a disc which was issued in this country in July 1957 and withdrawn soon afterwards at the termination of the H.M.V./R.C.A. contract. It was the best available version of the work in its day, and the same can be said for Rubinstein's new recording. If I remember rightly, Steinberg phrased the orchestral tuttis with more loving care than Wallenstein, but there is plenty to be said for the orchestral side of the new disc. For one thing, a real attempt has been made to get a balance between piano and orchestra. In the second half of the first movement development someone seems to have lost heart, for the woodwind are totally inaudible from letter J right up to the recapitulation. But elsewhere counter-subjects come through well, and the bassoon solo at the end of the slow movement sounds most beautiful. The orchestral sound on the whole will be too dry for most tastes, and the piano quality is a bit tinny, especially in the mono version. In the stereo disc the wind, who presumably had their own microphone, have been superimposed on the 'cellos at the extreme right, a somewhat improbable place to find them, and there is here and there a lack of realism in the sound. But all discs of Chopin concertos seem to have their defects, and most of them have more defects than this one. What makes it outstanding is, of course, Rubinstein's performance. In the quick movements his playing has an almost slap-dash quality which is endearing and stems from his rhapsodic approach to the music. You listen to every bar, held by the wonderful piano writing, wonderful because Rubinstein makes it so. In the dramatic middle section of the slow movement he brings a tension to the music such as I have not heard before. The result is wonderfully exciting. This is a really superb account of this lovely music.

The concerto is just too long to go comfortably on one side without cutting, and the third movement is wisely relegated to side two. (Even so, eight bars of the final tutti of the first movement are cut. They may not be very good bars, but the music sounds worse without them than with.) As a fill up, Rubinstein plays the Andante spianato and Polonaise, of which only the polonaise has orchestral accompaniment (perfimctory even by Chopin's standards). The timps are sharp in the final chord, which is about all I noticed of the accompaniment. Rubinstein manages the poetic andante ravishingly, and in the polonaise is heroic and wayward by turns, making the music sound far better than it really is.

These transfers represent such clean, careful, and intelligent work that they still demand to be heard

Pristine Classical is beginning to approach Testament in its exquisite choices, and their website is becoming a veritable treasure trove. Here is a prime example. Well-loved performances in sound that has clearly been handled by a remastering engineer blessed with a true pair of musician’s ears.

The interest value of the First Concerto is perhaps increased by the presence of Stanislaw Skrowaczewski, still conducting today (at age 89 at the time of writing). A recent Bruckner Seventh in London attested to his skill and musicality; here, as a much younger man, he demonstrates an ability to get an orchestra to blaze with passion, and not just in the opening tutti. Even the orchestra’s final chords of the first movement speak of patriotic zeal. Skrowaczewski’s composerly ear enables much detail to shine through and textures, for once, not to appear over-burdened, while his way with the opening of the central Larghetto (Romance) is simply beautiful. In this, I appear in some contrast to the original Gramophone reviewer, quoted on the Pristine Audio website. The stereo recording, after Andrew Rose’s expert work, appears beautifully balanced, previous allegations of shrillness in earlier incarnations banished to the past where they belong.

Rubinstein’s playing is everything one could ask for: patrician, impeccably stylish, considered and perfectly voiced, particularly in the First Concerto. His fingers sound like they are made of steel: There is not one imbalance, not one weakness in the entire progam. Taking the First Concerto, the marriage of fire from Skrowaczewski and Rubinstein’s all-encompassing pianism is a powerful one indeed. Orchestral solos (like the horn at seven minutes in) seem well balanced in the sound picture. It is difficult to imagine this recording (June 1961, Walthamstow, London) sounding better. And of his three commercial recordings, it is this one that surely captures Rubinstein’s way in a unique balance of youthful freshness mixed with maturity. The bouncing left hand trills towards the end of the movement are rather restrained (compare Pollini/Kletzki and the way Pollini makes them fizz). Rubinstein’s eloquent, unforced cantabile in the Romance is a thing of wonder, and the music’s swell and release is judged to a T. Rubinstein’s phrasing of the finale’s theme is an utter delight, fresh and engaging, the later section in octaves delivered with such deceptive simplicity. The piano sound throughout, thanks to 32 bit XR-re-equalization, has none of the original tinnyiness.

The orchestral sound for op. 21 is remarkable. There is real punch to the orchestral exposition; more, the upper strings lose little tone, making for a most satisfactory audio experience. This is the January 1958 Carnegie Hall recording. The first movement has plenty of time to breathe, yet the urgency inherent in Chopin’s F Minor is impeccably conveyed. Wallenstein is not quite as characterful a partner as Skrowaczewski, but he heads up fair steam. It seems unfair to rob him and his players of what little orchestral interest there is by excising some of the final tutti of the first movement, but off with its head (or tail, more accurately) anyway. Nevertheless, one has to admit the dramatic outburst of the second movement is visceral, and the low string pizzicatos come across well in this new transfer. Rubinstein’s filigree remains magnificent, but this is just a notch (a small one) below the exalted standards of the coupling. Rubinstein is the pianistic gentleman at the outset of the finale, suave and seductive; Wallenstein is less so, underlining the fact that this particular partnership is not really a meeting of equals.

These are the most spacious of Rubinstein’s readings of the concertos (against 1937 and 1931, respectively, both LSO/Barbirolli, then LAPO/Wallenstein No. 1, 1953, and NBCSO/Steinberg No. 2, 1946). There is still plenty of excitement, but this is tempered with a knowing that has few peers. The disc as a whole represents a journey into the heart of Chopin; it is just that one performance penetrates a little further than the other. It is worth stating that even if you have these performances in earlier incarnations, these transfers represent such clean, careful, and intelligent work that they still demand to be heard.