Stokowski in Philadelphia, December 1962 - one of his finest Beethoven 5ths and more!

Stokowski's long association with The Philadelphia Orchestra began in 1912 when, at the age of 30, he gave his first concert in the city with the orchestra. He stayed in Philadelphia for almost thiry years, handing over to Eugene Ormandy at the end of the 1940-41 season. However, Stokowski returned in 1960 as a guest conductor and continued a series of occasional concerts with the orchestra in the years which followed.

The present concert, which took place on 17 December 1962, is taken from broadcast master tapes originally held in the conductor's own archives, and supplied for transfer for this release by Edward Johnson, who for many years put great efforts into the running of the Stokowski Society, and who obtained a number of recordings from Stokowski's assistant, Jack Baumgarten. This is its first public issue.

As with the earlier concert from the same year (16 March 1962, issued as PASC372), we took the unusual step in preparing this release of making all transfers and restoration at a very high sampling rate of 96kHz in order to preserve the highest frequencies captured on tape. Although these exceptionally high frequencies cannot be reproduced on CD, they are available in a 24/96 FLAC download from our website.

Remastering took heed of Stokowski's frequent instruction to producers of his recordings. He liked a full and reverberant sound, as Edward Johnson explains: "The thing to remember with Stokowski is that he started life as a church organist and in his recitals usually played orchestral works transcribed for the organ. So when he became a conductor he recalled the days when he had his feet on the deep 32' pedals and heard the final chord of the piece dying away down the nave for a couple of seconds. Consequently, his correction notes to record producers always asked for "more lows" and "more reverberation," as in the example attached to the producer of his LP of the "The Planets."" [Letter reproduced here] I have been careful in my application of this, using a convolution reverb of one of the world's great symphony halls to give the recording the space and texture lacking in the original radio tapes.

The December concert has at its heart a stirring performance of Beethoven's Symphony No. 5, but elsewhere Stokowski conducted a considerable chunk of 20th Century music. One piece, Revueltas's Sensemaya, which was played between the Ravel and Stravinsky, proved too long to fit onto this CD. It is, however, available to download for free here on our website and is featured as a bonus track in our FLAC downloads.

The concert featured a number of encores, including a couple of arrangements by Stokowski himself. The finale to the concert brings a light-hearted close to a concert which was put on as a fundraiser for the orchestra's pension fund, and conveys a sense of real warmth between the musicians and their audience.

XR remastering by Andrew Rose at Pristine Audio, January-February 2013
Cover artwork based on a photograph of Stokowski in Philadelphia, 1960 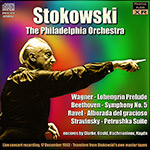 I wonder if anyone uses Morse Code anymore. When I was very young I, at least, knew the signals for the letters S, O, and V. The V signal was “dot-dot-dot-dash,” coincidentally the same pattern as the opening notes of Beethoven’s Fifth Symphony. Bruno Walter recorded the symphony with the New York Philharmonic a week after the U.S. entered World War II and Columbia Records issued the album with a bright red cover displaying a large white “V” with the “dot-dot-dot-dash” symbols under it. I guess anyone who saw the cover got the message—Beethoven had been enlisted in the fight against fascism and the Fifth had become the “Victory Symphony.” That was the recording on which I learned the piece. Years ago, many conductors used to emphasize the “fate knocking at the door” image of the introduction by taking it Molto pesante instead of the straight Allegro con brio that the score calls for. I’ve never been able to make up my mind which way I prefer to hear it performed. I like hearing the opening done emphatically but when it’s done at a slower tempo than the exposition, it can sound like it starts on a downbeat and distorts the rhythmic pattern instead of emphasizing it. Stokowski, not surprisingly, was one of the conductors who really dramatized the opening, both on his 1931 recording with the Philadelphia Orchestra and, nearly a decade later, with the All-American Youth Orchestra. I happen to be very fond of both of those recordings so, in this live performance, recorded at Philadelphia’s Academy of Music in 1962, one with the same virtues as the previous ones, he could be said, at least in my case, to be preaching to the choir, although I’ve never heard his 1969 recording. It has been the recent fashion for conductors to stick closely (or try to) to Beethoven’s metronome markings, observe all the repeats in the score, and sometimes, even use instruments based on those of Beethoven’s time. Unfortunately, many of these conductors are neither individually, nor collectively, Stokowskis.

The opening radio announcement by the orchestra’s associate conductor, William R. Smith, includes Revueltas’s Sensemayá. Given the CD’s 79-minute length, something had to give, but Sensemayá can be downloaded free from Pristine’s website. What’s included on the CD is interesting enough. I wonder if those in attendance could even imagine the circumstances surrounding the symphony’s first performance back in 1808. Beginning with the premiere of the Sixth Symphony, the program continued with “Ah, perfido,” The Gloria from the Mass in C, the Piano Concerto No. 4, the Symphony No. 5, the Sanctus and Benedictus from the Mass in C, and the Choral Fantasy! They don’t make audiences like they used to.

This concert begins with a lively performance of the Prelude to act III of Lohengrin with the Nie sollst Du mich befragen theme added to the ending. Since so many conductors add this, I assume it was Wagner’s decision to use it as a concert ending since, in the opera itself, the Prelude fades down directly into the opening music of the act. Next, comes the principal (or certainly, longest) work on the program, Beethoven’s Fifth Symphony. Stokowski offers an unhurried view of the music but the playing has plenty of rhythmic spring and textual clarity in addition to the juicy tone the orchestra could produce 50 years ago. I think this is the first time I could describe a performance of the Andante con moto as “sensuous.” Fate doesn’t knock at the door quite as deliberately this time around and the performance, unless you are offended by some stretched cadences, is hardly eccentric. The string playing has plenty of bite to it, too. His tempos, at least in the first three movements are quite similar to Otto Klemperer’s though of course, his performance, austere and weighty, inhabits a different sound world. Take away Klemperer’s observation of the outer movement repeats (neither taken by Stokowski) and you get these timings: I—Klemperer 7:12, Stokowski 6:53; II—Klemperer 11:08, Stokowski 11:15; III—Klemperer 6:13, Stokowski 6:07. I do think that Klemperer’s finale could use more animation because, even omitting the repeat, his performance times out at 10:53 to Stokowski’s 9:00. The latter’s has a more triumphant surge than Klemperer’s sober, monumental approach. If your tastes lie with even slower tempos, try to find Ferenc Fricsay’s Berlin Philharmonic recording; I might as well provide his timings (omitting the first movement repeat, which he observes—like most conductors, he ignores the one in the last movement): 7:29, 13:15 (!), 6:23, 9:30. I like the performance quite a bit but it may be a bit much for most listeners.

Stravinsky eventually made a suite from his complete score for Petrouchka, consisting of music from the First, Second, and Fourth Tableaux with a concert ending replacing the final few minutes. It runs a bit under 25 minutes. I don’t know if that is an “official” edition of the Petrouchka Suite since Stravinsky made two recordings of it, one of which (1940) uses less music from the First Tableau and starts about a minute into the Fourth Tableau. I suspect that, on that occasion, Stravinsky was hemmed in by the limited length of 78 RPM sides. Stokowski, using a similarly abbreviated edition, starts his excerpt from Tableau No. 1 at a more logical spot and starts the Fourth Tableau at the beginning. Granted, whether in suite or complete form, the colorful, characterful music virtually plays itself and it’s difficult to do a bad performance. Conductors like Stokowski and Dimitri Mitropoulos relish the score’s grotesquerie more than most of their colleagues, to considerable effect. Since the complete score runs only about 10 minutes longer than the (official?) suite, I wonder why conductors don’t just perform the whole thing. After hearing him conduct a performance of the suite, I asked Stravinsky why he didn’t just conduct the entire piece and, for what it’s worth, he complained about a lack of rehearsal time.

Stokowski and the orchestra polish off the virtuoso theatrics of Alborada del gracioso and the playful, tricky rhythms of Morton Gould’s Guarancha, the third movement of his Latin-American Symphonette. The Jeremiah Clarke Trumpet Prelude (formerly known as Purcell’s Trumpet Voluntary) is presented with stately dignity and Stokowski somehow turns Rachmaninoff’s very pianistic Prelude in C♯-Minor into an effective orchestral piece. The concert comes to a decisive conclusion as the players gradually stroll off stage during the finale of Haydn’s “Farewell” Symphony to occasional chuckles from the audience. Basing his decision, in part, on Stokowski’s personal preferences, the producer has enriched the normally dry sound of the Academy of Music with some discreet resonance.

This article originally appeared in Issue 37:1 (Sept/Oct 2013) of Fanfare Magazine