Mengelberg in New York: an arresting pot-pourri collection of recordings

The present volume offers a wide range of Mengelberg’s repertoire, from the Baroque, Classical and Romantic eras in the one- or two-disc releases of overtures and short works that were a staple of the 78 rpm era. Some of them Mengelberg had previously recorded acoustically with the New York Philharmonic (Mendelssohn and Saint-Saëns), while others had already received electrical recordings with his other orchestra, the Concertgebouw in Amsterdam (the Beethoven and the first two movements only of the J. C. Bach). However, aside from re-recording the Beethoven and J. S. Bach items (the latter in a different arrangement), Mengelberg never returned to the other works in the studio, making the bulk of these selections unique to his discography.

The earliest recording featured here is the Wagner, done at the tail end of Mengelberg’s sessions for Ein Heldenleben in December, 1928. Much of the rest of the present release was done over two days’ worth of sessions the following month. The remaining items were recorded a year later, along with his recordings of the Beethoven First and Eroica Symphonies just before he left New York, never to return.

The sources used for the present transfers were vinyl test pressings for the Handel; American Victor “Z” pressings for the J. S. Bach, J. C. Bach, Mendelssohn and Meyerbeer items; and pre-war Victor “Gold” label pressings for the remainder. The discs have a comparatively high degree of hiss inherent in the original recordings, present even on the quietest sources. In addition, the 1930 recordings were made with reduced forces in Liederkranz Hall, a smaller and presumably cheaper-to-rent venue than Carnegie, which RCA used for the orchestra after the onset of the Depression late in 1929. I have added a small amount of digital reverberation to these acoustically dry sides in order to better integrate the sound with the remaining items.

Producer and Audio Restoration Engineer: Mark Obert-Thorn
Cover artwork based on a photograph of Willem Mengelberg 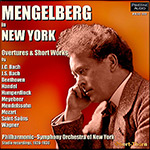 In March 1928, Walter Damrosch’s New York City Symphony Orchestra, plagued by financial problems, was absorbed by the rival New York Philharmonic. Several of its players were auditioned by the Philharmonic and among the ones who made the cut was a violinist named Winthrop Sargeant, who went on to be a music critic for The New Yorker. Willem Mengelberg had been conducting the Philharmonic for several years, recently as co-conductor with Arturo Toscanini. Years later, in his book, Geniuses, Goddesses, and People (New York, 1949), Sargeant, presumably with his tongue in his cheek, described Mengelberg’s rehearsal technique: “For about a decade he had been the Philharmonic’s supreme master. And he had been proud of his orchestra. With an apoplectic temperament that matched his red hair, and a meticulous Teutonic regard for system and technical detail, he had whipped the orchestra into a state of efficiency that had made it a worthy rival of Stokowski’s Philadelphia Orchestra and Koussevitsky’s Boston Symphony. Mengelberg was by nature an academician—a man of rules and regulations. He had an endless fund of very sound and very pedantic theories on how to train a symphony orchestra. He measured every breath and bowstroke with finicky precision. With the help of long lectures delivered in a unique dialect of Holland English, he explained the various systems of bowing and blowing by which he reduced the orchestra to a well-oiled machine. ‘Vy do you make ‘doo-doo’ ven I tell you to make ‘too-too?’ he would admonish a careless trumpet player. When the trumpet player obligingly made ‘too-too,’ he would grunt with satisfaction. ‘Now you make more like the Concertgebouw in Amsterdam,’ he would remark proudly. ‘The too-too system iss werry important.’”

“Mengelberg talked interminably. He often took up so much time orating about fascinating details that he had to call extra rehearsals in order to get a symphony thoroughly polished. He could hardly conduct two successive measures of music without stopping the whole orchestra to deliver a lecture. Many of his lectures were very elementary, and they were incessantly repeated. ‘Chentlemen,’ he would say at the beginning of a rehearsal, while the orchestra listened dutifully, ‘Chentlemen, goot orchesterspielen’ (this was the polar opposite in the Mengelbergian philosophy from ‘badt orchesterspielen’) ‘goot orchesterspielen, dat vill say you must not somewhiles look auf der balcony, und sometimes auf der ladies in der owdience. No! Goot orchesterspielen, dat vill say you vill look always auf der condooctor.’ And with a smart slap on his own chest and a slight rush of blood to his head, he would conclude, ‘und I am der condooctor.” With this emphatic statement, he would raise his baton and the Philharmonic would prepare to play. The violinists would place their bows on the strings in readiness; the wind players would inhale for the coming blast. Mengelberg would seem about to give the signal—and then he would suddenly think of something else to say. The baton would fall again, the violinists would place their fiddles in their laps, the wind players would exhale their wasted breath, and everybody would settle back in his chair. ‘I do not like schimpfen (scolding),’ he would continue. ‘I am not like odder condooctors. I do not make so’—here he would imitate the gestures of what he imagined to be the gestures of some of his famous colleagues—‘und so, und so. No! I make chust so!’—and here he would illustrate his typically Mengelbergian beat. A dissertation on the superiority of the Mengelbergian system would follow. It would sometimes be half an hour before the Philharmonic started to rehearse and then it would rehearse in driblets interspersed with similar lectures on ‘goot’ and ‘badt orchesterspielen,’ and how ‘goot orchesterspielen must can play loudt’ and also ‘must can play soft,’ and so on.”

“…By the time Mengelberg had thoroughly rehearsed a maneuver, the Philharmonic could carry it out automatically by itself. At concerts, the well-oiled machine ran faultlessly under its own power. Mengelberg merely stood at the controls, pressing an occasional button. The result was that the Philharmonic had become, if not the most inspired, at least the most spectacularly well-trained orchestra in America. And though they had occasionally wearied of his incessant harping on theoretical platitudes, the Philharmonikers had developed a deep respect for Mengelberg. He was the man who had made them what they were.”

If the lectures on “gut” and “badt orchesterspielen” are, in part, responsible for the parade of delights that is this CD, it was worth the Philharmonic’s suffering. The performances of 18th-century music are unburdened by musicological considerations but no less charming for that; nowadays, no one would be likely to milk the Air for the G String the way Mengelberg does. Aside from some oddly unbalanced wind chords, The Magic Flute Overture is brilliantly played, the Egmont Overture, likewise. When my class graduated from grade school, we marched up and down the aisle to the “War March of the Priests.” Like every other performance I’ve heard, Mengelberg’s is more sprightly than solemn. If you had taken a poll of opera-goers in 1880, the year of Offenbach’s death, and asked them whose music would hold the stage in 130 years, Meyerbeer’s or Offenbach’s, I am sure that Meyerbeer would have been the overwhelming choice. Well, here we are in 2013 and Tales of Hoffmann, Orpheus in Hades, La belle Hélène, and La Périchole, among others, are still performed; in fact, there are probably more performances per year of Tales of Hoffmann alone than there are of L’Africaine, Les Huguenots, and Le Prophète put together. What survives of Le Prophète is its majestic “Coronation March” (Mengelberg’s can swagger with the best of them) and some of the pieces from the opera’s ice-skating scene, thanks to Frederick Ashton’s ballet, Les Patineurs. The excellent sound of “Forest Murmurs” won’t surprise anyone who knows it was recorded at the same session that produced Mengelberg’s amazing 1928 Ein Heldenleben, which still sounds good today. The Siegfried excerpt receives a performance that’s as good as anybody’s, and features particularly sensitive wood wind playing. I’d prefer a slower tempo in the Hänsel und Gretel Overture but it’s certainly a well-polished performance. Like the Beethoven and Mozart overtures, it was recorded in Liederkranz Hall, a smaller, drier-sounding auditorium than Carnegie Hall. The producer, Mark Obert-Thorn, has added a discreet touch of resonance to mask this. The excellent collection concludes with a lively but refined Omphale’s Spinning Wheel. Mengelberg made previous and later recordings of a few of these pieces but, as the producer notes, “the bulk of these selections are unique to his discography.”