This release quite literally picks up where Volume 1 left off - with the second of Toscanini's two London Brahms concerts, mixing archive BBC radio commentary and high quality EMI music recordings, all benefiting greatly from XR remastering to bring the finest possible sound quality from this historic evening of music. Great care has been taken to try and preserve continuity between the very different sound quality of the two sources and prevent any clunky sonic lurches between high and low fidelity. I've also worked hard on getting maximum clarity from Sir Adrian Boult's short interval talk.

As for the music - well happily this has (post-remastering) a fine, open sound, with great frequency extension both in the high treble and in the rich, warm lower reaches of the orchestra. As with the first volume, the effect is totally transformative: from a constricted, boxed-in, congested and distant sound to something that's positively alive, and appears as a true musical narrative, vibrantly unfolding directly in front of you as you listen today.

XR remastering by Andrew Rose at Pristine Audio, January 2013
Cover artwork based on a photograph of Arturo Toscanini 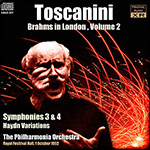 As I have already suggested, this performance of the Third Symphony is the finest Toscanini has left us. As if to illuminate the point further, Manoug Parikian, the leader of the Philharmonia Orchestra for these Toscanini concerts, later said that for him the most sublime and unforgettable moment of the series was the third movement of the Third Symphony. The opening cello theme had, according to Parikian, an unusual tenderness to it that stirred the depths of human feeling. It was, he added, "...one of my most profoundly moving experiences, and a lasting reminder of Toscanini's undoubted genius".

Great recordings of this work are thin on the ground, possibly because it is Brahms' most misunderstood symphony. It is a work that combines passion and resignation in equal measure and few conductors have been able to unite those two contrasting facets into a workable performance. This is the symphony where Toscanini's tempi are most diverse - the first movement of this Philharmonia account is almost 1½ minutes faster than on his NBC recording. Because this symphony, the most unique of all Brahms' symphonies in that it ends all of its movements piano or pianissimo, is so emotionally complex it is surprising that Toscanini, ever the objectivist, is actually able to encourage the Philharmonia to play with such astonishing weight and passion. The first movement positively surges, the finale opens in an exhilarating fashion, with strings astoundingly fleet. In between, the contrasts between the melancholic phrasing and wild outbursts are laid bare. Pianissimos are here given suppleness, and the most fearsome fortes seem to come from the core of the earth, so shattering are they. No wonder this performance is one of the most memorable things Toscanini did in his last years.

Almost as memorable, in fact, as the astonishing Fourth. This was the symphony Toscanini most admired by Brahms - and one can see why. It is a work of greatness, moving between tragedy and wild exclamation, often within the same movement. Just as it is the culmination of Brahms' symphonic output, so it is the epoch making performance on this cycle. This is the greatest single performance in Toscanini's NBC cycle and this Philharmonia account is as inspired as that, perhaps the single most impressive 'live' Fourth ever recorded (and notably different from an equally great Fourth from Celibidache with the Munich Philharmonic).

The conception is laid out in the grandest of terms, the opening bars given astonishing presence. The development is built up inexorably, and the coda to the first movement, still noble and statuesque, generates enormous energy. Toscanini, crucially, does not slow before the timpani enter near the penultimate bar, and thus the climactic ending actually gathers momentum. There is no mannerism here, just the thrill of hearing the closing bars as they should be played. The second and third movements appear in this performance more than just intervals before the extraordinary unwrapping of the great passacaglia of the final movement. True, we hear the intervention of fireworks from the roof of the Festival Hall, but Toscanini remains unfazed and the listener cannot fail to be unaware of the very conscious build up of the layers of this extraordinary movement. The music arches forward nobly and naturally, the dynamics amplified by some of the finest wind playing on any recording of the work. Horns are given astonishing girth, strings play with the most sensitive of balance. Toscanini does hold back in the final moments of the movement's coda, but this allows the inevitability of the triumphant finale to reach its apogee. The moment is sublime.

The performances, from a very fine orchestra conducted by a fabled conductor, are magnificent.

For whatever reason, either because of a difference in the original masters or an adjustment on the part of engineer Andrew Rose, these recordings sound richer and clearer to my ears than those on Volume 1 of this series, which included the first two Brahms symphonies and the Tragic Overture. It could also be my imagination, but I compared these sets carefully. Volume 1 suffers from a kind of overly plastic reproduction that veteran collectors recall, with a cringe, from the “electronically enhanced stereo” sound from the 1960s created by engineers who thought they were doing music lovers a favor, but were instead presenting inferior sound vis-à-vis the decent mono masters. The chief problem occurs in the reproduction, or lack thereof, of the instrumental timbres. Come to think of it, this is the same complaint many of us had with early digital.

I read the notes of both volumes carefully to see if there was any adjustment in the engineering noted. None that I could determine. Volume 2 is still described as an “ambient stereo” recording. But here, the violins sound like string instruments, not a computer manipulated sound wave, and the cello section sings out with clarity. Dynamic range is remarkable. Most importantly, the performances, from a very fine orchestra conducted by a fabled conductor, are magnificent. As I have noted before, Toscanini’s famously stern, masculine sinew is tempered by an Italianate lyricism resulting from a long career in the opera pit. His battle cry during rehearsal was cantare, sing, and it is manifested here in readings that are at once propulsive and naturally breathing. The NBC recordings from the same vintage are closer in sound and a bit more exciting, but these live recordings in front of an adoring London audience are noticeably more rhythmically fluid.

As in Volume 1, one must deal with the stuffy BBC announcers, and in this volume, a speech by the dean of 20th-century British conductors, Adrian Boult, which virtually deifies Toscanini. I am extremely adverse to such exaltation of performers, but few others besides Toscanini, truly a historic figure, deserve such treatment. His devotees will want to hear these alternatives to the NBC sound, and younger music lovers curious about all the fuss will be able to dip into the Toscanini aura in remarkably modern sounding editions.