This release presents for the first time in any extended-play format the complete issued 78 rpm recordings of a pioneering ensemble under its enterprising founder and conductor.* Fabien Sevitzky (1893–1967), a nephew of Serge Koussevitzky, was perhaps best known as the music director of the Indianapolis Symphony Orchestra from 1937 to 1955. Prior to that, however, he founded what was claimed to be the first permanent string orchestra ensemble in the world.

Drawing seventeen players from the ranks of Stokowski’s Philadelphia Orchestra (of which he himself was a bass player from 1923 to 1930), Sevitzky presented the first concert of his Philadelphia Chamber String Simfonietta in 1925. Within two years, they made their first recordings for Victor, following up with another series two years later. Eleven years were to pass before they stood before the microphone again for their last session. They disbanded as Sevitzky’s involvement in Indianapolis increased.

The novelty of the ensemble, a wide-ranging repertoire, and a high level of playing from what was then arguably the finest orchestral string section in the world, led to high praise from contemporary critics. Herbert Peyser of the New York Telegram wrote in 1929, “Orchestral or chamber music have brought few things outside Toscanini’s works of wonder to exceed them.”

The sources for the transfers were American Victor editions: Orthophonic pressings for the Bossi Burlesca, the two Grieg pieces and the Tchaikovsky; wartime “Silver” label copies for the Arensky; and prewar “Gold” label pressings for the remainder. The earlier recordings were made in Victor’s Camden Church Studio, a small, unreverberant venue that tended to give an edge to violin tone and boominess to the lower strings.

The first two sides of the Bloch (the world-première recording of the work) were originally recorded on 10-inch matrices and then dubbed to 12-inch sides, with a resulting degradation in sound. For the last session, the ensemble recorded in the warmer, more expansive acoustic of the Academy of Music, but was hampered, in the case of the Arensky, by substandard wartime pressings made from recycled shellac. 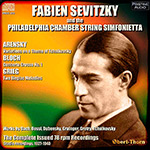 Anyone who loves the chamber orchestra will want to hear the Philadelphia Chamber String Simfonietta.

The Philadelphia Chamber String Simfonietta was formed in 1925 by 17 string players from Stokowski’s Philadelphia Orchestra. Its conductor, Fabien Sevitzky, was a double bass player in the orchestra. He was a nephew of conductor Serge Koussevitzky, a virtuoso on the double bass. Within two years, the Simfonietta was recording for Victor. It was the first permanent string orchestra in the world, and as such its recordings were influential in their time. Sevitzky would go on to a full time conducting career, winning considerable acclaim for his 18 seasons with the Indianapolis Symphony. That activity by Sevitzky would eventually bring the Simfonietta’s career to a close in the 1940s. Much of the Simfonietta’s charm comes from Sevitzky’s conducting. While its players were accustomed to making a calorically rich, heavy string sound for Stokowski and Ormandy, their sound for Sevitzky in the Simfonietta is clear, refined, and elegant, although with all the technical finish and panache one expects from the Philadelphia Orchestra. Sevitzky’s performances have a clarity, balance, and insight all their own. Indeed, the Simfonietta’s playing is at least the equal of any chamber orchestra’s that succeeded it. The breadth and occasional novelty of its repertoire guaranteed it a good critical response in its time. What Mark Obert-Thorn gives us on this CD are the complete officially issued recordings of the Simfonietta. Listening to them is no antiquarian exercise. The recordings are as vital and persuasive today as when they were made.

The Simfonietta’s first recording session included Marco Enrico Bossi’s Intermezzi goldoniani, a frisky, entertaining work that shows off the ensemble’s virtuosity to great advantage. Also set down then were Grieg’s Two Elegiac Melodies, in as moving a performance as I’ve ever heard. The Simfonietta returned to the studio two years later, in 1929. The elegance of Sam Franko’s arrangement of a Bach Sinfonia is a far cry from the heavy breathing Bach-Stokowski creations these artists were playing at that time. Arcady Dubensky’s Gossips is a delightful pizzicato study, premiered in Philadelphia only five months prior to the recording. The Elegy from Tchaikovsky’s Serenade for Strings sounds stately, intimate, and unaffected. Percy Grainger’s Londonderry Air (“Danny Boy”) gives the Simfonietta the opportunity to display its warmth without being cloying, while they play Grainger’s Molly on the Shore with rare finesse and wit. Also in 1929, the Simfonietta made the premiere recording of Ernest Bloch’s Concerto Grosso No. 1, introduced four years earlier in Cleveland. If you are familiar with Howard Hanson’s great recording of this with the Eastman-Rochester Orchestra, you will be struck by how much more crisp and incisive Sevitzky’s interpretation is. Sevitzky’s tempos at times are faster, and where Hanson can count on a larger, more lush string section, Sevitzky’s strings are nimbler and even somewhat astringent. Both accounts are persuasive, and I cannot say which one I prefer. The work’s baroque origins, however, are more clearly evident from Sevitzky.

The Simfonietta’s final recording session was in 1940. They played three charming and atmospheric orchestral selections from André Grétry’s operas, with consummate elegance. The main work at this session was Anton Arensky’s Variations on a Theme of Tchaikovsky. This recording unfortunately was not released until after the attack on Pearl Harbor; the recycled shellac it was pressed on compromised the sound quality. Nevertheless, Sevitzky leads a great performance. The touchstone for me in this work always has been John Barbirolli’s version with the London Symphony. Sevitzky is more classical than Barbirolli in his phrasing, in tune with the type of conducting prevalent in Russia during Arensky’s lifetime. The vibrato rich, heart on sleeve conducting of Russian music is a later creation. What’s more, Sevitzky’s players are more technically assured than Barbirolli’s. They are sensitive to every nuance of Sevitzky’s interpretation, always producing a full yet well-defined sound. I cannot imagine Arensky’s masterpiece being better served than by the Simfonietta. Mark Obert-Thorn, in addition to giving us listenable and usually appealing transfers of these recordings, also has furnished an excellent program note. Perhaps interest in this CD will spur Pristine into reissuing Sevitzky’s Indianapolis recordings. Anyone who loves the chamber orchestra will want to hear the Philadelphia Chamber String Simfonietta.