Two Classical masterpieces from Sargent and the RPO

For a conductor of Sir Malcolm Sargent's stature, and for one who was such a prolific recording artist, it seems odd that his recorded output includes so few of the "warhorses" of the mainstream symphonic repertoire. Sargent's studio work, on the whole, tended to concentrate on choral music (Beecham referred to him as "the greatest choirmaster we have ever produced"), concertos ("he seems to sense what the pianist wants of the music even before he begins to play it" - Cyril Smith), and English music.

Thus the two recordings here represent, surprisingly, rare moments in his studio career. They were recorded seven months apart in 1960 and 1961, a time when the conductor was also engaged in trying to preserve the Royal Philharmonic Orchestra in the wake in March 1961 of the death of Sir Thomas Beecham.

Despite their issue on the budget HMV Concert Classics label, they were of course well-recorded by EMI, and this new XR remasterings of transfers made for us by Edward Johnson has worked to clear out some of the boxiness of the original, adding clarity and focus as well as overall body to the orchestral sound. Pitch analysis suggests the orchestra tuned to A443 for both recordings - this has been retained for this release.

XR remastering by Andrew Rose at Pristine Audio, January 2013
Cover artwork based on a photograph of Sir Malcolm Sargent 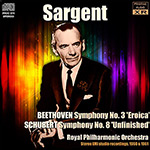 REVIEW Beethoven Eroica, original LP issue
I should never have guessed Sargent as the conductor of this had I not known beforehand. It is a civilised, polished reading, lacking some drama and intensity, and in these qualities it reminded of Kempe's "eighteenth-century" reading of last month. But Sargent is less extreme in this view, and the playing is fresh, the musical argument consistently gripping one as it should. The opening of the slow movement illustrates the performance's qualities--as well as its shortcomings. The speed is extremely slow, but where with a Toscanini the tension is frightening Sargent caresses the music, giving it a velvet quality. Rarely have I felt the aptness so much of Coleridge's famous remark about this being a funeral procession in deep purple. The Royal Philharmonic woodwind respond superbly.

The scherzo is on the slow side too, and the finale is as slow as the music can stand (not quite so slow as Kempe however). The work loses some stature and certainly intensity, but the merits I have noted shine consistently through, and anyone wanting a bargain Eroica in very warm and ample stereo should be delighted with it. Matacic provides a possible stereo alternative on Whitehall (PLPS129), a more vigorous, dramatic performance, but the recording is sour by comparison. I have yet to hear the mono version of the Sargent. Unfortunately his slow speed for the Funeral March entails a tum-over in the middle.

REVIEW Schubert Unfinished, original LP issue
"Pop Schubert at a pop price," I wrote when the mono version of this disc appeared. Hearing it in stereo I feel even more like adding that it would be good value at any price. Sargent's view of the first movement of the Unfinished is so very well integrated. I remarked of another conductor's recent record of the symphony that he made parts of it sound like Tchaikovsky. That is easy to do, but it is the sort of trap into which Sargent never falls. This first movement holds together most convincingly from start to finish. The playing throughout is excellent in the second movement, too.

Since the stereo sound is excellent, this record, with its admirable playing from the RPO, is well worth its modest price.

Hearing the standard repertoire played this well is something no one should take for granted.

Malcolm Sargent rarely recorded the core German symphonic repertoire. That he did so beautifully should not be surprising, given his excellent accompaniments to Artur Schnabel in Beethoven’s piano concertos. I would not say that the renditions on this CD are great interpretations, but they are great performances nevertheless. Their greatness resides in the gorgeousness of the orchestral playing, as accomplished an account of these two symphonies as I’ve ever heard. I don’t mean gorgeous in the Karajan/Berlin Philharmonic sense of the word, with a dark hued wash of enveloping sound. Rather, I mean beauty in the nuts and bolts of orchestral playing. Sargent’s attention to detail in note values, attacks, intonation, balance, and dynamics is just breathtaking. Raymond Leppard, whom Sargent befriended early in Leppard’s career, wrote that he didn’t think Sargent looked too deeply into his scores, but “you couldn’t miss with that stick.” Indeed, Sargent was one of the most gifted conductors of his generation. He also was a rigorous rehearser, an aspect of his art that is brought out by the superbly prepared performances on this CD. George Martin of Beatles fame produced a number of Sargent’s recordings, and it would be interesting to know if he was the producer for these sessions. Regardless, this CD shows that there was much more to Sargent than his nickname of “Flash Harry” would suggest.

The first movement of the “Eroica” goes at a moderate clip, without the exposition repeat. The blend of the strings can give you goose bumps. The brass never overwhelm them, while the wind choirs play with subtlety. Sargent’s funeral march is slow but not heavy handed. He always provides the sense of forward motion, never allowing the phrasing to drag. His scherzo is quick and angular, with particular care for accents. The horn playing in the trio is especially elegant. Sargent takes the last movement at a moderate tempo, always phrasing with a delicate touch. His coda is exuberant, the timpanist adding just the right amount of propulsion. This is an “Eroica” whose details you never will tire of.

Sargent paces the first movement of the “Unfinished” at a relatively quick tempo, and includes the exposition repeat. He gets a dark sound from the strings, and a wide dynamic range from the entire orchestra. The intonation of the lower strings is breathtaking, while the sound of the brass choir has plenty of depth. The second movement features a measured tempo, yet it moves. A sense of tragedy is paramount, with the quiet moments at times possessing a feeling of desolation. This is a highly distinctive “Unfinished.” Andrew Rose’s remasterings from LPs in both symphonies are warm and agreeable. The tuttis, however, have a slight fuzziness, and the dynamic range is a little restricted. The “Eroica” was available on a Royal Classics CD I have not heard. If forced to recommend just one recording of each of these symphonies, I would choose Hiroshi Wakasugi and the Saarbrücken Radio Symphony for the “Eroica,” and Leonard Bernstein and the New York Philharmonic in the ‘Unfinished.” Sargent’s recordings allow us to revel in the craft of a master conductor. Mstislav Rostropovich compared him to “a lion.” Hearing the standard repertoire played this well is something no one should take for granted.