Following our release last year of an XR-remastered edition of Toscanini's 1951 Carnegie Hall Brahms symphonies with the NBC Symphony Orchestra, I was repeatedly urged to tackle the London series he conducted in the Autumn of the following year. This is the first of two volumes, each dedicated to one of those two memorable concerts. The effect of Toscanini's return to the British capital for the first time since before the Second World War and the enthusiasm of the response of the music-lovers of Britain has been well-documented, as has the brilliance both of the Philharmonia Orchestra at this time, and the superb performances Toscanini elicited from it over two nights of Brahms.

These remasterings aim to bring the listener closer than ever to the magic of those nights, beginning and closing with excerpts of BBC radio commentary setting the stage, and the (edited!) rapturous applause reproduced. Much of this extra content was drawn from AM broadcast recordings which have taken some considerable effort to weave into the much high quality music recordings made by EMI. Happily the latter have responded brilliantly to Pristine's 32-bit XR remastering system, with a sound that's full, vibrant and very much alive - particularly do in our Ambient Stereo versions of this release.

XR remastering by Andrew Rose at Pristine Audio, January 2013
Cover artwork based on a photograph of Arturo Toscanini 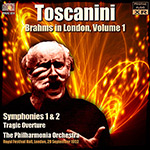 The performances of the symphonies are compelling - and certainly much warmer and more lyrical than his recorded cycle with the NBC Symphony Orchestra. As interpretations, they rather contradict the impression that all Toscanini performances were somehow symmetrically constructed, with tempos often staggeringly similar from performance to performance. With the exceptions of the First and Fourth Symphonies, these Philharmonia accounts are often less expansive than the NBC cycle he recorded in late 1951/early 1952. The notable achievement in this cycle is the Third Symphony which here receives the most assured of all Toscanini's interpretations of this symphony - a performance of considerable sunniness with the most beautiful of cantabile ever-present. This contrasts with the NBC recording which is slow, lacks rhythmic tension and seems drawn downwards by an interminably long beat.

The First Symphony is a powerful performance, although as in all Toscanini's interpretations of this work he fails to conduct the opening bars of the work as they should be. These opening bars, with its unrelenting timpani strokes, are amongst the most grand and profoundly moving of all passages in the symphonic canon, yet Toscanini, like virtually most conductors, seems confused by Brahms' marking of sostenuto. Taken at almost quaver 100, the development of the opening timpani seems too fast - and he accelerates the timpani ruining the grand line that Brahm's intended (and for which you have to turn to Furtwängler or Celibidache to hear correctly played). This aside, however, the movement develops inexorably, with the contrapuntalism of Brahm's construction not only implied, but grandly developed. Dynamics, whilst not as scrupulously observed as Celibidache (the most inspired interpreter of this symphony) are actually more clearly heard in this Philharmonia account than in his NBC recording of the work. The opening drum rolls, even if tempi are wayward, do clearly distinguish between the opening f and the concluding ff, and in the first movement's main theme cellos, woodwind and horns play perfectly before the appearance of the crescendo. In fact, the care given to the woodwind is an example of this performance's individualism, and this is no more evident than in the finale with its horn and flute melodies, here played gorgeously by Dennis Brain and Gareth Morris. The playing here is certainly more distinctive than on the NBC recording, and recalls another Philharmonia recording of the First Symphony with Guido Cantelli (a performance remarkably similar to this one). The trombone's missed entry in the finale (and then his fluffed notes) do not noticeably ruin what is one of the very best (and most exciting) recordings of the work available.

Listening to the opening of the Second Symphony, with its low strings and horn and woodwind exchanges, I was amazed at how much presence exists in this Testament transfer. Toscanini was reputedly somewhat worried that string tone was somewhat undernourished, yet hearing the opening bars and then the entry of the string's first theme, one is aware of an extraordinary depth of tone. Tempi in this symphony are all swifter than in Toscanini's studio recording of the work, yet this is never at the expense of the string's beautifully phrased playing. The playing is at once lyrical as it is idyllic, with the tunes given a statuesque presence, the penumbral shading of Brahms' scoring spot-lit neatly against the borders of lighter melody. The second subject of the first movement is as song-like as one could ask for, the coda intense and evocative. If the middle movements are gracious, with felicitous woodwind playing, the finale, marked Allegro con spirito, is as grandiose and driven as any. The playing is wonderfully dynamic, the development to the coda remorselessly laid out before us but not overdriven in any way. When the triumphal coda appears, one of the most astonishing things Brahm's wrote (and as similarly transparent as the closing pages of Bruckner's Fifth symphony) the exuberance is infectious. The great brass sonorities are here captured magnificently, strings arching ever higher upwards, horns and trombones radiant to the close. The cheers at the end say it all!

If any set of Brahms symphonies deserves to be in Fanfare’s Hall of Fame, this is the one!

It is easy to get tired of reading reviewers gushing about remastering: how great it sounds, how much detail you’ll hear that you never heard before, how it makes you experience the event in ways you never thought possible. Collectors interested in historical recordings are inundated with that sort of hype, but once in a while, all of the hype doesn’t even add up to the truths uncovered by hearing a much-loved recording over which obvious restorative care has been taken. Simply put, Andrew Rose has restored these Brahms recordings in a way that is nothing short of miraculous! Beyond this, he has fashioned each of the two volumes to bring the listener as close as possible to experiencing the concert in full.

Volume 1 presents the Tragic Overture and the first two symphonies. My previous acquaintance with Toscanini’s much-discussed 1952 Philharmonia Brahms had been with a Testament version, released some 17 years ago following much anticipation. The music was a revelation, but the sound was, frankly, a let-down. It was boxy, bass-heavy, and shrill, an overall constricted experience. I could not imagine that even a restoration engineer with Rose’s experience could work enough magic to raise such subpar sonics to a level of artistry commensurate with the music. Hearing these recordings afresh, a new sense of space and atmosphere imbues every bar, allowing Toscanini’s vision of the pieces to be heard afresh.

The trajectory is clear from the first two chords of the highly charged Tragic Overture. A reluctance to overindulge in Romantic sentiment is balanced with an energy level so high as to be dangerous. For another point of reference, listen to the first crescendo of the First Symphony’s fourth movement. A minor peak is scaled, but mountain and molehill are never confused. This is a crescendo in perfect context, and the descent from E♭ to G-Minor sonorities is luminous without overemphasis. Dwelling on that fourth movement, the brass chorale has a beautiful sense of loftiness and some distance, fluffed notes and all, and the entrance of the ubiquitous string theme is as transcendent as it must have been in the Royal Festival Hall. Revel in the slow but inevitable crescendo as the variations build to understand just what Toscanini accomplished with this excellent orchestra.

The fact that the Second Symphony hasn’t even been mentioned says nothing about its merits as a performance. The easy grace with which the first movement opens is complemented by the pastoral charm of its third movement, and as ugly as the Philharmonia winds can sound on some recordings of the late 1940s, they are in excellent form here. For anyone who accuses Toscanini of rigidity (and in the past I have been among them), listen to the luscious strings at 1:22 of the fourth movement as the Maestro slows the tempo just a shade. That shade makes all the difference, and the wild applause at movement’s conclusion is more than deserved.

Volume 2, the second concert which was broadcast two days later, finds Toscanini conducting the so-called Haydn Variations along with the Third and Fourth Symphonies. The variations feature some really fine brass playing, and Toscanini manages to expose a lot more of Brahms’s counterpoint, set against those continually off-balance phrases, than I’d previously suspected, again down to this refreshing new restoration. Again though, the symphonies steal the show. I marvel every time at the string accents Toscanini coaxes from the Philharmonia in the Third’s first movement and at the gorgeously balanced brass, woodwinds, and strings gracing the second’s opening. It is difficult to fathom how anyone can resist the fourth movement’s drama, shot through with more of those staggeringly precise string accents; was the Philharmonia ever a fine orchestra!

The best was saved for last. After a stirring intermission address from Adrian Boult, the mighty Fourth sums up the achievements of this monumental cycle. Especially memorable, amidst the towering strength and explosive power of the passacaglia, are the delicacy of the woodwinds and strings as they alternate chords, yes, even despite the firecrackers that could have interrupted the performance.

How best to describe the thrilling conclusion, its slow and interrupted build, those arpeggios, that last chord, and the wild applause that follows? Perhaps it’s this sense of occasion that makes the Pristine version of these historically important concerts so satisfying. Getting so much sound out of the performances is a major accomplishment, but stitching together the announcements, applause, and music so that the seams are nearly invisible defies description; the work that went into such a project must have been as intensive as it has been rewarding to hear the results. In this case, I cannot recommend the ambient stereo version strongly enough. Sit down, put on the headphones or make sure you’re positioned correctly for stereo, and travel back to Toscanini’s first appearance in London since 1939. In his intermission talk, Boult poeticizes:

“ … we heard the music bathed in a brilliant light, with every detail crystal clear and eloquent in a way we hadn’t heard before.” With this restoration, his meaning becomes as clear and palpable as the music itself. If any set of Brahms symphonies deserves to be in Fanfare’s Hall of Fame, this is the one!