Stokowski in Philadelphia, 1962 - a fabulous concert in stunning sound quality

Our first ever 24-96 ultra high-resolution transfer and download, from Stokowski's own master tapes

Stokowski's long association with The Philadelphia Orchestra began in 1912 when, at the age of 30, he gave his first concert in the city with the orchestra. He stayed in Philadelphia for almost thiry years, handing over to Eugene Ormandy at the end of the 1940-41 season. However, Stokowski returned in 1960 as a guest conductor and continued a series of occasional concerts with the orchestra in the years which followed.

The present concert, which took place on 16 March 1962, is taken from full stereo broadcast master tapes originally held in the conductor's own archives, and supplied for transfer for this release by Edward Johnson, who for many years put great efforts into the running of the Stokowski Society, and who obtained a number of recordings from Stokowski's assistant, Jack Baumgarten. This is its first public issue. (A second Philadelphia concert from the same year and source, performed on 17 December, is available here as PASC379.)

We took the unusual step in preparing this release of making all transfers and restoration at a very high sampling rate of 96kHz in order to preserve the highest frequencies captured on tape. Although these exceptionally high frequencies cannot be reproduced on CD, they are available in a 24/96 FLAC download from our website.

Remastering took heed of Stokowski's frequent instruction to producers of his recordings. He liked a full and reverberant sound, as Edward Johnson explains: "The thing to remember with Stokowski is that he started life as a church organist and in his recitals usually played orchestral works transcribed for the organ. So when he became a conductor he recalled the days when he had his feet on the deep 32' pedals and heard the final chord of the piece dying away down the nave for a couple of seconds. Consequently, his correction notes to record producers always asked for "more lows" and "more reverberation,". I have been careful in my application of this, using a convolution reverb of one of the world's great symphony halls to give the recording the space and texture lacking in the original radio tapes.

Stokowski never recorded any Webern commercially - this release adds a new composer to the Stokowski discography. He was always a great champion of Sibelius in his early Philadelphia years. He made the first American recordings of Finlandia and The Swan of Tuonela on 78s, and also the World Premiere Recording of the 4th Symphony in 1932, as well as giving the US concert premieres of Sibelius's 5th, 6th and 7th Symphonies in the 1920s.

Both the Debussy and Mussorgsky here are Stokowski's own orchestrations. His efforts in the latter, more commonly heard in Ravel's version, were designed to make the music sound less French and more Russian, which may explain the omission of the two France-related movements in this version.

XR remastering by Andrew Rose at Pristine Audio, December 2012-January 2013
Cover artwork based on a photograph of Stokowski in Philadelphia, 1960 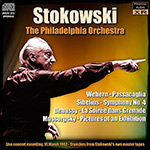 The major work is the unique transcription of Pictures

Originally written for piano, Mussorgsky's Pictures at an Exhibition has fascinated other composers and there are many arrangements of it for varied performers. Check the ArkivMusic listings to see the many arrangements for ORCHESTRA On that site you will also see the countless other performances including those on piano, organ and other instruments. The score does cry out for rich orchestral textures; Ravel's famous one commissioned by Serge Koussevitzky is the best known and has received countless recordings. Stokowski's version already is available in three fine recordings: Oliver Knussen and the Cleveland Orchestra, José Serebrier and the Bournemouth Symphony , and Mathias Bamert with the BBC Philharmonic. There also is a superb DVD with Serebrier and the National Youth Orchestra of Spain.

Now we can hear this remarkable transcription with Stokowski conducting the Philadelphia Orchestra, which he led for three decades. He first conducted it in 1939 and made his RCA recording at that time. This new performance is part of a concert given in the Academy of Music March 16, 1962. This is an important issue for many reasons. It contains the conductor's only recording of music of Webern (Passacaglia), as well as Symphony No. 4 of Sibelius, a work he premiered in America with the same orchestra three decades earlier, recording it for RCA at the same time. La Soirée dans Grenade was recorded twice by Stokowski, in Philadelphia in 1940, and in 1976 with the National Philharmonic.

The major work is the unique transcription of Pictures which he recorded in Philadelphia in 1939, with the All American Orchestra in 1942, and in stereo with the New Philharmonia in 1965. Pristine's new remastered version of the 1962 performance is made from Stokowski's private broadcast master tape courtesy of Edward Johnson (who led the Leopold Stokowski Society for many years—thank you, Mr. Johnson!). We can be certain we now have the best possible audio from these tapes, and the sound surely is very detailed. However, the fact remains that the Academy of Music had dreadfully dry acoustics, and even with XR reprocessing bass is often undefined, and the lack of resonance detracts from Stokowski's usual rich string sonorities. Still, this is a major issue in so many ways that collectors surely will wish to investigate it.