It's true to say that these recordings were very well made for their day - better perhaps than the Brahms which had preceded them. XR remastering here isn't a question of rescuing a dismal historic artefact; rather it's a case of eliciting the very finest sound quality possible from from fine source material - digging deep into the bass for added richness; opening out oft-constricted strings; lifting a veil from the upper treble. In short, whilst the current EMI transfers are perfectly acceptable representations of what was possible in 1956-59, these Pristine remastering offer us what more could have been heard had Klemperer and the Philharmonia had a 21st century recording facility to work with. It's one of those classic series of recordings which merit the very best sound quality - and which should stand thus in every collection.

XR remastering by Andrew Rose at Pristine Audio, November 2012
Cover artwork based on a photograph of Otto Klemperer 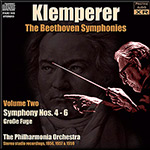 This seemed to me a performance of the utmost integrity in the monaural version. The stereophonic one is even more impressive, and, of course, much more realistic. As you listen, you become conscious that the instruments are in their accustomed places, with an interesting exception to which I shall come in a moment, and that they show no tendency to move about. Stereophonically this record is a huge success. The second violins are not in their usual place. Most English conductors put them behind the first violins, on the left of the platform so that the bellies of the instruments are facing the audience. But in the old days they were usually put at the front on the right, so that the audience could enjoy visually as well as aurally antiphonal effects between the two groups of violins on opposite sides of the platform. Sir Adrian Boult is one of the few modern conductors who preserves this traditional layout, and he affirms that composers in the classical period often wrote with it in mind. The disadvantage is that the second violins cannot hope to produce so full a tone as the firsts because the bellies of their instruments are facing backwards away from the audience, and certainly for sound radio and for monaural records it would seem preferable to have firsts and seconds together on the left, producing their maximum tone. But what about binaural records? For the first time in the world of canned music the antiphonal effect becomes a possibility. How conductors are going to react remains to be seen, but Klemperer for one seems happy to use the old layout with the second violins on his right. A passage like the opening of the Storm movement in the Pastoral certainly profits from this arrangement.

There is a perceptible improvement to be enjoyed as a result of Rose’s remastering efforts.

These releases represent a sonic update by Andrew Rose of the well-known and highly regarded Klemperer EMI Kingsway Hall releases from 1956-60, plus the Grosse Fuge recorded at Abbey Road Studio One. Though EMI pressings of that era could be noisy and sometimes less than luminous, the master tapes themselves have always been considered to represent the best that was possible in early stereo, and listeners have been able to enjoy them on CD for some time now without having to make too many allowances for antiquity. There is nonetheless a perceptible improvement to be enjoyed as a result of Rose’s remastering efforts.

The sound here seems to have had a veil lifted from the treble, and the general effect of comparing these CDs side by side with the EMI releases is to note a greater kaleidoscopic and reverberant depth as a result of Rose’s efforts. These CDs sound nearly modern in their lack of “flatness.” And for long stretches one nearly forgets entirely the age of the endeavor. Of course, dynamics in climaxes tend to back away from the listener a bit, and the price of greater luminosity is sometimes a slight metallic tinge to the reverberant field. But all of this is so subtle, that the general effect is of a nearly modern set of recordings. There is little real distortion. A happy plus in these releases is the inclusion as liner notes of the original Gramophone reviews from the cycle.

Rehearing after many years, I’m struck by how normal Klemperer’s pacing actually is, for a conductor often accused of slowness. He was clearly in full vigor for these interpretations. And the Philharmonia of his era was an elegant orchestra, as close as Britain ever got to replicating the smoothness and elision of phrasing possible in Berlin and Vienna. It does not hurt that the other major conductor most associated with recording the Philharmonia during this period was Herbert von Karajan! Karajan consciously aimed to combine the electricity of Toscanini with the smoother and more metaphysical view favored by Furtwängler. Klemperer, by contrast, sought a slower and more consistently rounded approach, not unlike Furtwängler’s, but without Furtwängler’s sudden shifts in tempo.

The Fifth and Seventh symphonies make for good cases in point. Listening is like watching a powerful railroad train from the air. The train moves massively and even swiftly. It does not seem to slow down going uphill, nor speed-up going down. It leans slightly into curves, but its weight carries it around them at full speed. One is aware of great mass-in-motion and the sheer impressiveness of its unstoppability. Indeed, this power is so striking, one is tempted to extend the metaphor and suggest that period-performance practices of the present day are giving us toy trains!

Back in the early 1960s, much was made of how slowly the scherzo in the “Pastorale” came across in Walter’s Columbia Symphony recording—and it was commented that Klemperer’s recording was even slower. But listening with fresh ears, I’m struck by how well Klemperer’s tempo comports with a group of people actually dancing. If you were watching a folk dance on the village green, the participants would most likely move at a tempo like this—one which takes into account the sheer physics of mass and movement. Thought about this way, the more common “Pastorale” tempo choices often seem cartoonish and un-danceable.

In general, when it comes to phrasing Beethoven, an irreverent analysis might go like this: Toscanini—dogs sneezing; Karajan—a bullet train; Klemperer—a hundred car freight train.

I’m happy to be a hobo on this one. Save me a boxcar!