Electrifying performances from the Detroit Symphony recorded by Mercury, 1953-56

This release brings to a conclusion our series covering the recordings of Paul Paray with the Detroit Symphony Orchestra which Mercury Records have chosen not to reissue on CD. They are presented here in order of recording, and span the end of the mono era and the birth of commercial stereo recording.

In each case, with the exception of Wagner's Flying Dutchman Overture, these are Paray's only recordings of these works, and as such are valuable additions to the present day catalogue. All have been remastered using Pristine's 32-bit XR method, and it has been interesting to note how the corrective influence of these technology become less intensive as the recording technology used by Mercury improved considerably between 1953 and 1956.

In one instance we have chosen to use an alternative source to the original Mercury LPs. Wagner's Forest Murmurs occupied the end of an LP side in Mercury's release, and its loud, brassy climax suffered terribly as a result from end-of-side distortion. A later reissue on the Wing label (a Mercury subsidiary) avoids this problem, if slightly at the expense of the top end clarity found elsewhere on the original Mercury pressings.

Overall, however, sound quality is as good as we have come to expect from Mercury. With the final recording in stereo we have opted to present the rest of the programme in Ambient Stereo, which provides a sense of space around the musicians without sacrificing the integrity of the central mono signal.

XR remastering by Andrew Rose at Pristine Audio, November 2012
Cover artwork based on a photograph of Paul Paray 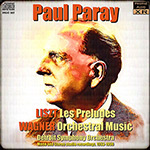 A remarkable document, of Mercury, of the Detroit Symphony and, most of all, of Paray. Recommended.

These Detroit Paray performances hail from Mercury recordings which that company chose not to issue on CD. Paray only provided an alternative recording of the Dutchman: All other pieces constitute his sole recordings. All sources are from Mercury LP originals apart from one: The Forest Murmurs is from a Wing issue (because the placement in the original issue was at the end of a side, with resultant distortion problems).

The Paray Liszt Les Préludes of December 1953 (Orchestra Hall, Detroit, from Mercury MG50036) holds a rapt, mysterious opening—the laudable clarity of the recording and transfer (the latter by Edward Johnson) in no way undermines Paray’s concentration. This is a tremendous, impassioned account (witness the high violin lines around the six-minute mark). The Detroit players give their all, be it in terms of tenderness, foreboding, or full out climax. Paray underlines Liszt’s darker side. The silence of the transfer in the tender moments is noteworthy to us critics; proper listeners may go right ahead and enjoy the magic unsullied by any untoward distractions. There is so much to enjoy here, from the suave cello/horn phrasing around12 minutes in to the delicious violin staccato articulation to the rounded depth of the bass and Paray’s expert ear for balance. There is energy aplenty here (analogous, perhaps, to Doráti’s reading from the same Mercury catalog, available on a Mercury CD: see John Bauman’s review in Fanfare 22:3). The final moments under Paray blaze, the bright recording seemingly perfect for Liszt’s scoring.

Talking of blazing, the opening to the overture to Holländer (11/27/1954, as are the following two items) is also positively alight. String articulation is remarkable. The string players dig in with preternatural unanimity, the brass have let rip in no uncertain fashion; the storm is gale force, the whole aura elemental. If only performances in the theater preceding the whole opera panned out like this (none has so far in my experience here in the U.K.). Perhaps the staccato woodwind (in the music that is to be later “Steuermann, lass die Wacht!”) could be a bit more jaunty. A small quibble, though, in the context of such energy. The recording, made in the Cass Technical Hall, Ohio, is simply remarkable in its presence. The “Good Friday Music” perhaps missed some of the rapt, glowing Innigkeit that this music demands; yet, interestingly, the same criticism is not valid for the hypnotic, whispered oscillations of “Forest Murmurs.” There is a tremendous sense of space to the recording here, enabling the forest sounds (woodwinds) to register evocatively. The Act I Prelude to Parsifal is actually separated from this and appears at the end of the disc, presumably as it carries a different recording date (3/23-24/1956). It glows and then bursts out into an explosion of radiant energy.

The upper string sound can tend towards the steely in the early outbursts of the Tristan Prelude, yet Paray’s flowing interpretation carries all before it. Again, it is rapport with the interior, transcendent side of Wagner that lets the music glow from within, and which causes the trail to the final, all-consuming climax to be so compelling. The recording just holds for the highpoint. The “Liebestod” is consistent with the Prelude in its sense of movement. Drama is fully played out. For once, the omitted voice is not missed too much. The climax here, however, is not quite so lucky as that of the Prelude, and suffers somewhat in terms of recording. A remarkable document, of Mercury, of the Detroit Symphony and, most of all, of Paray. Recommended.