This volume is the first of five which will reissue, for the first time in one series, the complete symphony cycle which English Columbia commissioned to commemorate the centennial of Beethoven’s death in 1927.  It was a bold move for the label, perennially in the shadow of its larger competitor, HMV, to embark on such a project at a time when no other company had recorded all nine symphonies using the relatively new electrical process.  Indeed, HMV and Polydor would not complete their cycles until several years after the centennial had passed.

The first four symphonies were assigned to British conductors (Henschel, Beecham, Wood and the Northern Irish Harty) while the remainder were given to Weingartner, already generally acknowledged as a Beethoven specialist.  The German-born Sir George Henschel (1850–1934) was equally noted for his appearances as a baritone recitalist as he was for his conducting.  He was the first music director of the Boston Symphony Orchestra, and this Beethoven First Symphony is his only recording as a conductor.

Beecham’s recording of the Second Symphony was the first of three he would make (the others were in 1936 with the LPO and 1956/7 with “his” RPO).  While all share an exuberant approach to the main theme of the first movement, the present performance threatens to go off the rails with tempi that are just short of humanly impossible to play.  The Luftpausen just before and after the Trio in the Scherzo were an interpretive indulgence Beecham did not repeat in his later versions.  It has never been reissued on CD before, perhaps in part due to the unusually high playback speed required (84.4 rpm at A4 = 440Hz, quite the fastest speed I’ve ever encountered for an electrical recording).  Henry Wood’s contemporaneously-recorded Leonore Overture, although not part of the Centennial Symphonies series, has been included to fill out the short program, as a sort of preview for his Eroica on Volume 2.

The sources for the transfers were first edition American Columbia “Viva-Tonal” pressings.  Multiple copies of each were assembled, and the best sides were chosen for transfer, although it must be kept in mind that these early electrics are inherently rather noisy.  The Henschel set was plagued by pitch fluctuation throughout each side, which has been corrected in this transfer. 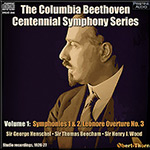 In 1927, the British Columbia recording company marked the Beethoven centennial by issuing the first electrical recordings of his nine symphonies. In another 14 years, these recordings will have been recorded as close to the year of Beethoven’s death as they are to us. Pristine Audio will eventually reissue new transfers of all these historic recordings. These were not, however, the first recordings of Beethoven symphonies. Quite a few go back even further. According to Mark Obert-Thorn, who is responsible for these excellent transfers, “All of the Beethoven symphonies were recorded multiple times complete, acoustically. Claude G. Arnold’s discography of acoustic orchestral recordings (The Orchestra on Record, 1896-1926) lists nine pages of them...Frieder Weissmann came closest to doing a complete cycle; his lacked only the Seventh and the final movement of the Ninth (which was recorded with Eduard Mörike conducting the Ode to Joy).” Appropriately enough, the first CD in Pristine’s reissue contains Beethoven’s first two symphonies, which still carry traces of the 18th century with them. Malcolm Sargent once suggested that, if Beethoven’s symphonies had come down to us without numbers or dates, one could probably place the First, Second, and Ninth Symphonies in their proper places but putting the rest in sequence would be difficult. It seems to be generally assumed that musical performances were more “expressive” and “free-wheeling” or just plain eccentric a century ago. There is, to be sure, some recorded evidence of this, but my guess would be “it depends.” Some conductors undoubtedly were more individualistic and self-indulgent than those we are accustomed to hearing but you may be sure that there were many virtuous straight-arrows who were less willing to inflict their personalities on the music. There were also, no doubt, a considerable number of hacks.

Georg (later “George”) Henschel was born in Germany but lived most of his career in the English-speaking world and was eventually knighted. Oddly, for a conductor, his principal instrument was his baritone voice but he could play the piano well enough to accompany himself and did, on several recordings. He was a friend of Brahms and wrote a memoir of his friendship with the composer. When Henschel was born, in 1854, Brahms was 20 years old and Beethoven had been dead for only 27 years. Can you remember events that took place 27 years ago, in 1986? Chernobyl? Iran–Contra? The space-shuttle Challenger exploding? Bill Buckner’s unfortunate misadventure? Is it really that long ago? It is possible that Henschel was the oldest conductor of any celebrity to make an electrical recording. His contemporaries, Robert Kajanus (1856-1933), Max Fiedler (1859-1939), and Karl Muck (1859-1940) also made some. Artur Nikisch (1855-1922) only lived long enough to make some acousticals. Interestingly, three of them, Nikisch, Fiedler, and Muck, eventually followed Henschel as music directors of the Boston Symphony Orchestra, of which he was the very first one. A photograph of Henschel and the orchestra reveals a peculiarity of the seating arrangement: the basses and cellos are divided, with half on the orchestra’s extreme left, behind the violins, and half on the extreme right. Brahms reputedly approved of this setup.

Henschel’s performance of the First Symphony is a fairly leisurely one; he doesn’t feel a need for urgency in the Allegro con brio first movement but the tempo is a comfortable one and what I assume to be a smaller-than-usual orchestra mitigates any feeling of heaviness. Likewise, he observes the Andante cantabile of the second movement but minimizes the con moto. The effect is quite pleasant; in fact, the whole performance has a relaxed lightness that I found quite enjoyable. The Minuet is more-or-less conventional, and perhaps his Allegro molto e vivace is fast enough but not particularly urgent and the orchestra certainly plays well enough. Can we infer anything about 19th-century performance practices from this recording? I doubt it. Incidentally, he observes all the repeats, which did not always happen on 78s, whether for musical or practical reasons. Unhappily, this is his only recording as a conductor though he lived until 1934. I wonder how he would have done a Brahms symphony.

On the other hand, Thomas Beecham, while he adheres to convention in the Second Symphony’s Scherzo, ignores the first movement’s exposition repeat. Beecham’s moderately paced introduction leaves one unprepared for the way he takes off at the outset of the Allegro con brio. I think I can say with the utmost sobriety that this is the fastest performance of the movement you are likely to hear. As Obert-Thorn writes, the performance “threatens to go off the rails.” The playing of the strings is astonishingly accurate and nearly unanimous though, inevitably, some of the fast passagework is a bit blurred. He dispatches the movement in 7:28! The rest of the performance, at least, resembles his two very good subsequent ones from 1936 and 1957. Was he trying to squeeze the first movement onto two sides? Given that the original “78” rpm recording (it was actually recorded at a speed of 84.4 rpm!) uses four discs, I don’t see the necessity. Perhaps it was merely a momentary eccentricity, like the pauses he makes before and after the Trio in the Scherzo. Henry Wood’s supple and intense Leonore Overture No. 3 serves as a nice bonus. Given the age of these pioneering recordings, I was pleasantly surprised at how good they sounded.

I once lived next to a switching yard with the occasional rumble and squeal of train wheels going on all day; the only time I would notice it was when I had a visitor who would ask something to the effect of “How can you stand all that noise?” The rest of the time I was oblivious to it. Although the producer issues a warning that these early electricals were inherently noisy, it’s no big deal. I had no problem with it at all and found myself quite absorbed in the performances. Obviously, they do not compete with the best modern ones (though I really enjoyed Henschel’s First Symphony), but they are truly deserving of the designation “historic” and I look forward to the rest of the series, which will line up as follows: No. 3 (Henry Wood), No. 4 (Hamilton Harty), and the rest (Felix Weingartner).