Klemperer was a busy man in 1957 and thereabouts. Having polished off the Brahms symphonies (Pristine Audio PASC360-362) in the springtime, he soon set to work on the Beethoven canon. October alone saw recordings in London's Kingsway Hall of the bulk of the series - all or part of the First, Second, Fourth, Sixth, Eighth and Ninth were taped in stereo during this month, together with the Coriolan Overture present in this volume.

It's true to say that the recordings were very well made for their day - better perhaps than the Brahms which had preceded them. XR remastering here isn't a question of rescuing a dismal historic artefact; rather it's a case of eliciting the very finest sound quality possible from from fine source material - digging deep into the bass for added richness; opening out oft-constricted strings; lifting a veil from the upper treble. In short, whilst the current EMI transfers are perfectly acceptable representations of what was possible in 1957, these Pristine remastering offer us what more could have been heard had Klemperer and the Philharmonia had a 21st century recording facility to work with. It's one of those classic series of recordings which merit the very best sound quality - and which should stand thus in every collection.

XR remastering by Andrew Rose at Pristine Audio, November 2012
Cover artwork based on a photograph of Otto Klemperer 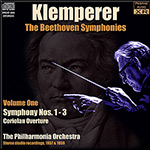 All of us owe a debt to Walter Legge - even the music critics among us - for his acumen in detecting great gifts and his ruthless determination that they shall be displayed in this country. It is principally due to him that Klemperer's stature was at last established here; London has a firm tradition of Klemperer neglect going back to the early thirties, when only a few critics shouted his greatness into deaf ears. In recent years there have been few more profoundly thrilling events than those tremendous Beethoven series, few more exciting moments than when the curtain to the artists' room of the Festival Hall was suddenly pulled aside and that great figure came shuffling out, stick held aggressively forward, hand groping for the rail, the huge head flung back like an Easter Island statue. If one raised one's eyes to a box above, there usually was Mr. Legge concealed behind a triumphant grin, and if one had recovered from the concert sufficiently by morning, one could limp round to the shops for the records of the Beethoven symphonies which Mr. Legge's Columbia connection provided...

If you are new to Klemperer in Beethoven, get this set, especially for the outstanding “Eroica.”

After reviewing Andrew Rose’s disappointing remasterings of Otto Klemperer’s Brahms symphonies for Pristine Audio, I wasn’t sure what to expect from Rose’s versions of the same conductor’s Beethoven symphonies. Happily, the results here are far more successful. Rose states that his objective is to create a sound “had Klemperer and the Philharmonia had a 21st century recording facility to work with.” I’m not sure that’s an entirely realistic goal given the quality of the source material, but Rose endeavors bravely to achieve it. I had on hand Andrew Walter’s 1998 EMI remastering of the Second Symphony for a comparison. The EMI version possesses decidedly better tone color throughout the orchestra. However, the string sound often is congested and there is little or no hall ambience. What’s more, the orchestral balance is not good. Andrew Rose’s remastering is decidedly easier to listen to. The problems of balance are addressed expertly, and the strings clearly inhabit the same space as the rest of the orchestra. Rose has improved the dynamic range, and the spatial extension of the brass is quite impressive. Nevertheless, problems remain. The hall ambience, while clearly better than EMI’s, is too generic. One cannot tell if the recording was made at Kingsway Hall, Abbey Road, or in an aircraft hangar. The string sound at times is papery, not a true representation of the lovely English strings of the Philharmonia. All in all, Andrew Rose has given us a good remastering, yet perhaps only a stopgap on the road to something better in the future.

The performances are legendary. The First, from 1957, is spacious and noble. Although recorded just three weeks earlier, the Second has slightly muddier sound. Klemperer’s interpretation is fiery, with splendid architecture. An interesting contrast is from the live 1958 performance of this work, in very good monaural sound, with the Berlin Radio Symphony in Klemperer’s “Great Conductors of the 20th Century” set. It is not as well played as the studio version, but it is quicker and crackles with nervous energy. As for Klemperer’s 1959 “Eroica,” it features the best sound of all Rose’s remasterings. It is a shattering human document, slower and less quicksilver than the splendid version Klemperer recorded in monaural only four years earlier. Concerning the Coriolan Overture, it could not be bettered. If you are interested in comparable performances to Klemperer’s but with better sound, I would recommend George Szell and the Cleveland Orchestra in the first two symphonies, and in the “Eroica,” Hiroshi Wakasugi and the Saarbrücken Radio Symphony. In addition to the “Eroica,” Wakasugi recorded sterling accounts of Bruckner’s Second and Ninth with this orchestra. Andrew Rose’s Klemperer Beethoven is likely to cause considerable discussion among audiophiles. If you already have these performances on CD, I don’t know if you need Rose’s versions. But if you are new to Klemperer in Beethoven, get this set, especially for the outstanding “Eroica.”