A feast of Sibelius from Toscanini at his brilliant best

Here we bring together broadcast recordings from two all-Sibelius concerts that Toscanini conducted with the NBC Symphony Orchestra in February 1939 and December 1940. The concerts were similar in content - the only difference in programming being the replacement in 1940 of En Saga by Pojhola's Daughter, cutting the overall duration of the later broadcasts's musical content by approximately 7 minutes. Alas, the time contraints of CDs do not allow us to include representations of all the works here -Pohjola's Daughter won out on grounds of rarity (Toscanini's only US performance, it appears) and sound quality (our copy of the 1939 En Saga suffered some radio cross-talk, an issue also for our 1939 Symphony No. 2).

My aim with these reissues was to bring the full battery of XR-remastering technology to bear on these recordings. Many listeners will be familiar with at least half of the recordings here - the Symphony and Pohjola's Daughter were both issued by RCA with Toscanini's approval - but they will not be familiar with the astonishing sound quality it has been possible to achieve with the raw material at hand.

Gone is the scratchy, hissy and crackly sound of the RCA transfers, as well as the boxiness of the acoustic and a lack of real depth, to be replaced by a broader, more open sense of the space and musical vision Sibelius's music implies. Meanwhile, the 1939 recordings, whilst lacking the very high end treble of the later broadcast, still retain much of the same captivating sound quality and sense of atmosphere, the latter being particularly spellbinding and enthralling in The Swan of Tuonela.

XR remastering by Andrew Rose at Pristine Audio, October 2012
Cover artwork based on a photograph of Jean Sibelius 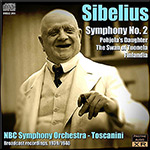 Firstly, I congratulate Pristine Audio for another very successful release. Andrew Rose has completely transformed what was an uncomfortable listen into a great document from one of the conducting giants of the twentieth century.

Sibelius’s reputation in the late 1930s was very high. Despite not writing the eagerly awaited “Eighth Symphony” his music was played frequently. Pioneers including Robert Kajanus and Thomas Beecham have left us lucky listeners with recordings from those times although there are gaps. No recording seems to exist of Klemperer who conducted the Second Symphony; I’d love to hear it!

Toscanini conducted Sibelius infrequently in his latter days and there are few recordings. The only two symphonies available to record collectors are the Second and Fourth (also available on Pristine PASC87). I’m not aware that he did any others. He conducted the Second Symphony with the BBC Symphony Orchestra at a concert on 9 June 1938 and this was available in 1990 on EMI CD 63307 but EMI have not re-released it since. It can be found on two labels: is “Maestro Celebre” and “Entertainment Products”, the latter as a download from Amazon US. In 1939 and 1940 he conducted the work with his NBC Orchestra plus several shorter pieces. The present 1940 performance, which is for review, has also been issued on RCA as part of their Toscanini Edition originally separately (Vol.21), and recently in last year’s bargain Box set of 84 CDs RCA 791631. Naxos Historical also released it in 1998 (Naxos 8.110811) but this now only available as a download. Strangely I can’t find it on Naxos Music Library, although I have streamed it from the French site Qobuz. All three companies added the 1940 Pohjola’s Daughter but whereas Naxos included performances of the latter two from 1940, Pristine have used the 1939 recordings. They explain that they have done this to get the best source material. RCA, on the other hand, have a 1944 Swan and a 1952 Finlandia.

Toscanini was a mere 73 at the time of these concerts and tremendous drive and intensity is in evidence from the beginning. Pristine have opened up the sound to such an extent that the listener experiences a real feeling of being in the concert. Before playing this I listened to the BBC recording from Spotify which is obviously in inferior sound. The BBC SO from 1938 and Adrian Boult made a formidable team and the orchestra plays splendidly. The sound is so good on the New York recording that comparisons are difficult but, My Word, they both play as if their lives depended on it. The versions are fairly similar; timings are not as one would expect: the fastest, the first movement, is half a minute slower than Kajanus. Playing the RCA version I felt I was being steam-rollered whereas on this transfer the orchestral sound is wonderfully clear. I particularly liked the sublime second movement but it’s all wonderful and we get to hear the well deserved applause. I must confess not to be very familiar with Pohjola’s Daughter but the playing is again very powerful and the woodwind comes through very clearly. It avoids what Beecham referred to as that “Sousa” effect that plagues so many recordings from Studio 8H.

The Swan of Tuonela comes from 1939 and is quite simply magical and makes one wish Toscanini had conducted more Sibelius; his “Fifth” would have been quite something. The NBC Orchestra was put together for Toscanini and their prowess shines through. One of the criticisms of the “Maestro” was his lack of humanity. I disagree and would use this piece as an example of his softer side.Finlandia completes the disc. Several versions exist. I love this piece and it’s a splendid rendition. The introduction of the hymn tune is very affecting. As with The Swan of Tuonela the sound is slightly inferior to that of the first two works but it’s very marginal. It’s a nice touch to have the radio announcer at the end.

I had intended to compare other versions from this period but in the end decided that Toscanini was unique, although he had imitators; not the great Cantelli. Yet Sibelius’s genius shines through every bar. This is very much for lovers of the great conductor and of these marvellous works.