John Ardoin lists seven Furtwängler recordings of Beethoven's Sixth and three recordings of the Eighth Symphony in his discography, and though it appears that a fourth, partial 1932 recording of No. 8 exists, he is most insistent that the present, 1953 Berlin recording easily trumps the rest. Here the full benefits of XR remastering can be heard, with dramatic improvements in sound quality, orchestral tone and texture immediately apparent to the listener used to the previous boxy and constricted acoustic of earlier issues. This issue is also considerably brighter in tone, a result of the careful analysis of remnants of electrical hum in the original recording, pointing to a far sharper tuning than the "standard" orchestral 440Hz - the 453Hz tuning of the orchestra is however not unusual for Furtwängler.

It's no great surprise to find less room for improvement over EMI's "studio" recording of the 6th Symphony, yet this too yeilded far greater tonal colour than the original might lead one to believe, and the XR remastering of this recording does seem to have injected a degree of life into it that Ardoin found lacking when comparing it to contemporary live performances. Once again I found that the original pitching was sharper than concert standard - EMI have it at around 446Hz though my own measurements suggested 451Hz was closer to the orchestra's actual tuning. In both recordings I've been able to minimise the use of additional noise reduction processing to keep as open and glorious a sound as possible.

XR remastering by Andrew Rose at Pristine Audio, October 2012
Cover artwork based on a photograph of Wilhelm Furtwängler 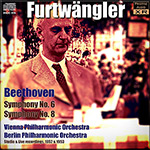 "In Furtwängler's hands, the Pastoral became remarkably expressive clay, to which he brought a plasticity vouchsafed no other conductor. There is a clarity to his performances (including the few prosaic ones) in which every note speaks. Even while weathering the storm of the fourth movement, Furtwängler's performance conveys a feeling of chamber rather than symphonic music and always implants a sense of serenity and well-being. Textures are transparent, bowings are light and subtle, and dynamics are carefully monitored. A fortissimo here is not the same as one in the other symphonies, the Third or Fifth, for example; it is more a matter of weight than decibels, with accents more a surge than a sharp delineation. It is only with the third-movement scherzo that the music grows in girth and momentum, as clouds start to gather at the end of the movement."

"The Eighth Symphony, both in actuality and in Furtwängler's approach, continues much in the spirit of the Sixth, though the music is (like the performances) more concentrated in a temporal and formal sense. But the same outpouring of well-being permeates both. In the three performances available, Furtwangler opens with a grand gesture, a musical embrace that attempts to reach out and gather in everyone and everything. It is like a shout of joy at being alive. There is an abundance of the brio Beethoven asks for, and a true vivace, in the sense of a vivacious, living organism."

“I’m speechless.” That was my reaction the first time I heard the present CD

Recently I watched Fellini’s 8 1/2 with a friend who never had seen it before. Her reaction when it was over was, “I’m speechless.” That was my reaction the first time I heard the present CD. Now a critic who is speechless would be of little use to his readers, so I have listened to this CD several more times and attempted to gather my thoughts. What’s foremost in my mind is that Furtwängler, more than any other conductor in my experience, conveys the epic nature of Beethoven. By epic I do not mean monumental, which so easily can be confused with grandiose—as sometimes occurs in the Beethoven performances of Klemperer and Bernstein. No, Furtwängler’s Beethoven is epic in the way that it tells a story, notably a story that illuminates the entire culture it comes from. For Furtwängler, Beethoven essentially is a lyric composer, and he conveys this quality in his interpretations through beauty of phrasing and of orchestral sonority. The epic quality exists in performances as widely divergent as Furtwängler’s 1944 and 1952 Vienna versions of the “Eroica.” In the recordings on the present CD, Andrew Rose’s superb remasterings contribute immeasurably to our appreciation of the distinctive sound Furtwängler got from Beethoven. This sound is not manicured like with Karajan but rather soulful and majestic. In Furtwängler’s hands Beethoven becomes the Homer of composers, a truly epic poet.

With the “Awakening of cheerful feelings” that begins the “Pastoral,” Furtwängler focuses notably on “awakening.” I’m reminded of the same sensation in the first movement of Mahler’s First Symphony. Furtwängler’s tempo here is measured and thoughtful, not bubbly. This is not just anybody entering the countryside, but Beethoven himself. A deep thinking personality is suggested by richness in the lower strings, horns, and first clarinet (is it Alfred Boskovsky?). In the second movement, one can imagine the composer lying on the ground by a brook. Furtwängler’s tone-painting is especially subtle, with gorgeous playing from the Vienna principals. Luscious string sound conveys the deep green of the countryside. The winds and horns in the next movement suggest that the “country folk” may have brought their own instruments to their “gathering.” Furtwängler’s conducting here reminds me of certain moments in his performance of Weber’s Der Freischütz. The thunderstorm has elements of light and shadow as in a Gainsborough landscape. There is a solitariness and a tension for the bridge passage to the last movement. Then, all nature seems to celebrate, as Furtwängler adopts a relatively quick tempo in the final movement. The overwhelming sense of joy prefigures the finale of the Ninth Symphony.

For Furtwängler’s Eighth, we are in Berlin. Klaus Tennstedt claimed that the Berlin Philharmonic was not a great orchestra until Karajan took over. I guess that all depends on what one means by great. If the ability to convey musical truth is what matters, then Furtwängler’s Berliners were one of the greatest orchestras ever. In the first movement of the Eighth Symphony, the orchestral sound is like a living organism, out of which the thematic material asserts itself. The tumult is celestial, like the birth of a galaxy. The metronome joke in the next movement is an occasion for gentle humor, with a few guffaws. Furtwängler’s moderate tempo here recalls the slow movement of Haydn’s “Clock” Symphony, with its own tick-tocking joke. The next movement’s minuet manages to be broad and delicate at the same time. The horns and clarinet engage in playing of almost superhuman delicacy in the trio. The last movement offers beauty with clarity. The music constitutes a dialogue that prefigures the late quartets.

If you are looking for stereo CDs of these works, the ones I listen to the most are by George Szell and the Cleveland Orchestra, and Rudolf Kempe and the Munich Philharmonic in the “Pastoral,” while for the Eighth I like Wolfgang Sawallisch and the Royal Concertgebouw, and Roger Norrington and the Stuttgart Radio Symphony. The Norrington offers historically informed performance practice with a vengeance. It’s important to remember that H.I.P. represents a historical artifact of today’s place and time as much as Furtwängler’s Eighth was of its time in 1953. I believe we lose a lot musically if we turn H.I.P. into an absolute ideal. One would have to be a hard hearted ideologue to dismiss Furtwängler’s performances on this CD because of vibrato in the strings and failure to adhere to Beethoven’s metronome markings. As Stravinsky said to Colin Davis, a metronome marking is just a beginning. I’m confident that Furtwängler’s Beethoven, particularly in these marvelous remasterings by Andrew Rose, will be a part of our high culture for a long time to come. This is a great conductor at his peak.