Ginette Neveu - one of the finest violinists ever recorded

Ginette Neveu's two studio concerto recordings were both made at the tail end of the direct-to-disc era, before magnetic tape took over, and the remnant shortcomings of the process, even as technology advanced, are still occasionally audible here in hints of swish and background surface noise. My aim was to use the XR process in such as way as to try and bring out the full frequency and dynamic range of Neveu's violin, as well as the rich tones of the low orchestra, so vital especially to the Sibelius concerto.

I've been able to address a number of concerns regarding pitch stability, more particularly in the Sibelius, where a certain amount of wow was present in my source material during considerable sections of the recording. Pitching of the original performances has been determined by analysis of underlying electrical hum and restored to these releases, with the Sibelius at A4=443.64Hz and the Brahms at A4=444.09Hz.

Overall the application of XR remastering has made tremendous improvements: by comparison the originals sound dull and flat - now the solo violin truly sings; one can almost hear the rosin flying off Neveu's bow! The Gramophone reviewer in 1946 described the Sibelius as incandescent - Neveu certainly sounds on fire here!

XR remastering by Andrew Rose at Pristine Audio, September 2012
Cover artwork based on a photograph of Ginette Neveu 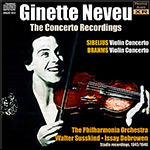 Competitive festivals are always tiring for the adjudicator, but often have unforgettable moments that refresh and inspire. I observed, recently, in one of many competing choirs of school children, a- girl of about twelve years old, who was so completely possessed by the music she and her neighbours were singing, that she stood out from them as one with a halo about her head.

No other violinist that I know is so possessed by the spirit of music as Ginette Neveu : and it was of her that I thought while watching this small girl. But round the head of Neveu is not a gentle halo, but a flame of fire. It is clear that, herself inspired, she inspires also the orchestra : and I am not surprised to hear that at the end of the recording session the Philharmonia Orchestra gave her an ovation. Orchestral players may have a rather cynical outlook on life—there is some reason for that—but they always rise to a great performance.

This is, without any doubt, a great performance—a performance so incandescent that at the end I felt like bursting into flames myself! Neveu has, as far as I can see, every quality of greatness. One takes for granted in a front-rank artist technique equal to all demands. Musicianship may fall some way short of such technique : but hers does not. I am told that she is as familiar with every bit of the orchestral stave as with her own part: and I can believe it. Fine supple phrasing, a magnificent attack, lovely rich singing tone, all these gifts are hers : and the result of all her qualities is that one experiences the sensation of the music growing under her fingers.

The opening of the concerto reminds one of Sibelius' admiration for Mendelssohn's scoring but the impression fades away as the violin sings on its beautiful tune. Sibelius' fondness for using the low registers of the wood-wind and brass is much in evidence in this concerto : and it certainly helps to create the feeling that the orchestra is a kind of Caliban—"grim, almost uncouth and certainly earthbound "—to the violin Ariel, free " to fly, to swim, to dive into the fire, to ride on the curl'd clouds." After the thirty, or so, continuous bars of melody for the solo violin the clarinets and bassoons are both heard at a low pitch, while the solo violin dips and dives from the heights. This is a good illustration of the Caliban-Ariel analogy and only one of many. These opening pages also make us feel that everyone is at the heart of the work, and that we are in for a thrilling experience.

The orchestral playing, under Walter Susskind, is fine and vital. The sudden flashes of brass tone, the buoyant pizzicati, the beautifully calculated and colourful detail are all realised in this truly magnificent recording.

Sibelius has loaded—and, in my opinion, in the last movement somewhat overloaded—the solo part with formidable difficulties, but Neveu sails through processions of octaves, sixths, harmonics, and so on, with the utmost assurance and conviction and she plays the long cadenza with so much light and shade, such perfection of musicianship that one scarcely notices it is a cadenza ! A deeper note comes into the recapitulation section of the movement after a loud outburst from the full orchestra : and here (Part 4) we have some of the most richly expressive pages in the work. The rising phrase for the cello (which has been much used, in sixths,' by the soloist) haunts the memory.

The opening of the slow movement (clarinets, oboes, flutes, in thirds) provides one of the few pages in Sibelius' music of the influence of Wagner, since it recalls a similar passage in the Prelude to the third act of Tristan and has the same desolate atmosphere.

As Neveu was playing the slow movement tune—one that is full of " thoughts that lie too deep for tears "—someone came noisily into the room and I felt as I had received a physical blow, so utterly caught up was I into this exquisite playing of the music. It is not to be described, it must be heard.

The final movement is immensely vital and glowing, superbly played ; but not, I feel, on a level, musically, with the rest of the work.

One has cried out before, and often, against duplication of frequently recorded works but I must confess that I await eagerly, and with hope, for Ginette Neveu and this orchestra to give us the Beethoven, the Brahms, and the Elgar violin concertos, and as soon as possible.

I do not think that there is another artist in the world today who has, in addition to the outstanding gifts of all virtuosi, such ardour and fire, such a capacity for embracing us all in the sweep of her bow.

Ginette Neveu, born on August 11, 1919, had reached only the age of 26 when she recorded Jean Sibelius’s Violin Concerto with Walter Susskind and the Philharmonia Orchestra on November 21, 1945, and had barely turned 27 when she recorded Johannes Brahms’s Concerto with Issay Dobrowen and the same orchestra on August 16-18, 1946 (at the same sessions, she recorded Ernest Chausson’s Poème). Later and earlier studio recordings of major works would include Claude Debussy’s Sonata (1948), Maurice Ravel’s Tzigane (1946), and Richard Strauss’s Sonata (1939). That’s all. Of course, she also recorded some short pieces; but A. R., reviewing her release of Sibelius’s concerto in The Gramophone in January 1946 (excerpted in Pristine’s insert), expressed the wish that she would go on (soon) to record Ludwig van Beethoven’s, Brahms’s, and Edward Elgar’s concertos. She managed only one of these (she supposedly planned Beethoven’s, Piotr Ilyich Tchaikovsky’s, and William Walton’s) before her tragic death in an airplane crash in 1949, but there’s an air-check of Beethoven’s concerto. For Elgar, admirers will have to be satisfied with her reading of La Capricieuse from 1946—although HMV didn’t publish it. All this commands attention because Neveu won the Wieniawski Competition in 1935—ahead of David Oistrakh and Henri Temianka (both Neveu and Temianka had studied with Carl Flesch). All we have left, besides air-checks, must be found in a handful of studio recordings, the age of which may for some have militated against a thorough and rigorous assessment. Pristine’s Andrew Rose relates that he aimed to restore the “full frequency” of Neveu’s violin (she played one by François Lupot, although she also owned one made by Omobono Stradivari in 1730).

Since A. R. had called the Sibelius recording a “great” one, even upon its release, it deserves Rose’s attention; and his remastering reveals more than the splendor of Neveu’s tone (its brilliance in the upper registers and its gritty richness in the lower ones)—though it does that, too. It also allows listeners to hear the shimmering accompaniment of the concerto’s opening with almost digital fidelity, and picks out details from that accompaniment throughout the first movement; all that’s the more remarkable because, as Rose notes, the recording took place just before the era of magnetic tape. Neveu didn’t attack passages with Jascha Heifetz’s steely aggressiveness (his recording with Thomas Beecham, made in 1935, must have been familiar to her); but she reaches almost the same temperature, with perhaps even greater rhapsodic freedom (with Susskind providing sympathetic support), especially toward the end, without slashing and burning. If the slow movement lacks some of Heifetz’s urgency, her statement of the finale’s polacca theme (an updating of passages from concertos of the era of Giovanni Battista Viotti and Louis Spohr) pulsates with enough electricity to light several soundstages; and, as in other movements, her double-stops have an almost succulent purity that’s rare even among legendary violinists (Michael Rabin comes to mind as a comparison).

Whatever Rose wrought in his restoration of Sibelius’s concerto, he managed something comparable in capturing the orchestra’s sonority in Brahms’s. Neveu herself plays the often angular violin solo with the ferocious panache of a knife-thrower. The first movement therefore makes a visceral impression, though it also suggests a magisterial comprehensiveness organizing more than moment-to-moment detail. The transfer’s so startlingly lifelike that in the cadenza, Neveu almost seems to be standing in the same room with listener and speakers. The slow movement begins at a pace that could be deadening, but that in this case allows the theme’s lyricism to blossom; that’s true of the violin solo as well. Whence derives the reputation of Flesch students as soullessly intellectual? Does Neveu’s playing (or Bronislaw Gimpel’s, or Josef Hassid’s, or Ivry Gitlis’s, or Ida Haendel’s, for that matter) suggest it? In the finale, Neveu again wields the cutlass with which she slashed through the first movement’s thickets; but plenty of propulsive energy underlies her grand gestures.

For those who believe the judging in the Wieniawski competition may have been contaminated by ethnic or political considerations, Pristine’s release may serve as an occasion for reassessment. But at the very least, Neveu emerges in these concertos as a player with a gigantic personality and overwhelming richness of musical insight. Recordings that must count among the greatest ever made have now become available in the kind of restorations they clearly demand. The most urgent of urgent recommendations.