First CD and digital issues of these classic 1952 recordings

Eugene Ormandy’s association with American light music began shortly after his arrival in the United States.  One of his early acoustic recordings as a violinist was of Victor Herbert’s “Kiss Me Again” from the operetta, Mlle. Modiste.  He later recorded with a salon orchestra Lucius Hosmer’s Southern Rhapsody, whose finale, combining Dixie andSwanee River in counterpoint, is reminiscent of portions of Herbert’s American Fantasy.  (Both of those early recordings were contained in an Ormandy centenary tribute I transferred for Biddulph in 1999, WHL 064/5).

During his long Philadelphia tenure, Ormandy recorded much light music side-by-side with more substantial classics.  The recordings here come from two sessions held three months apart in 1952.  While the Herbert repertoire shared studio time with a group of Johann Strauss works, the Kay ballet suite was part of a typical Philadelphia Orchestra marathon session along with recordings of Liszt’s First Piano Concerto and Hungarian Fantasia with soloist Claudio Arrau and an entire album devoted to music from Tristan und Isolde.

Victor Herbert (1859 – 1924) was an Irish-born cellist and composer who was sent to study in Stuttgart by his German stepfather.  Herbert was already an established soloist and ensemble player with compositions for cello and orchestra to his credit when his wife, a singer at the Vienna Court Opera, was engaged by the Metropolitan Opera in New York.  Becoming an American citizen, he took on conducting posts in New York and Pittsburgh in addition to his work as a soloist before putting them aside to concentrate on a burgeoning career as an operetta composer.

While such Herbert melodies as “Ah, Sweet Mystery of Life”, “I’m Falling in Love with Someone” and “Gypsy Love Song” had kept him popular into the 1950s, the piano music of Louis Moreau Gottschalk was less well known when Broadway arranger Hershey Kay (1919-1981) adapted his work into a suite commissioned by the New York City Ballet and premiered in 1951.  Gottschalk (1829 – 1869) was a New Orleans-born, Paris-trained (by Hector Berlioz, among others) pianist and composer who toured widely in North and South America.  Kay structured his ballet as an old-time minstrel show, with dances, magical illusions and comedians, interpolating three non-Gottschalk minstrel tunes into the “Wallflower Waltz” and “Sleight of Feet” sections.  Rather than produce a “period”-style arrangement, Kay clothed the music in Broadway and popular idioms, and includes a sly nod to Petrushka in the “Wallflower Waltz”.

The Herbert works were originally issued on two 10-inch LPs, one for the concert works and the other for the operetta potpourris.  These were later reissued as two sides of a 12-inch disc (ML-5376), which was the source for the present transfers.  (Attentive listeners will note car horns outside the Academy at 1:26 and 1:51 in Track 3.  In addition, the noise at 1:56 in Track 4 is on the master tape, and appears on all LP copies.) None of the recordings on this program has been reissued commercially on CD, nor did Ormandy or the Philadelphians ever re-record any of the repertoire, making this reissue of particular interest to collectors. 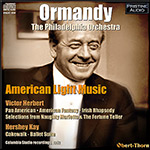 Conducting light music well is as much of a gift as conducting a Beethoven symphony well. It demands taste, sparkle, and energy. Eugene Ormandy had that gift. When Igor Stravinsky, who had no use for Ormandy, called him “a good conductor of Johann Strauss,” he didn’t realize that most conductors would accept this as a compliment. Harry Ellis Dickson of the Boston Symphony referred to Ormandy’s “Hungarian charm.” It is fully in evidence on this CD. Ormandy came to America in 1921 when, despite the advent of the Jazz Age, Victor Herbert’s music still was in its heyday. One of Ormandy’s first recordings as a violinist was of a Herbert song. So Ormandy’s recordings here of Herbert have zest and authenticity. In Pan American, written for the 1902 Pan American Exposition in Buffalo, Ormandy revels in Herbert’s treatment of Native American music. American Rhapsody is the kind of patriotic potpourri popular in Herbert’s time. Ormandy and his orchestra go full tilt at “Swanee River,” “Dixie,” and the national anthem. Herbert’s Irish Rhapsody of 1892 is a terrific piece, filled with local color and dancing rhythms. Herbert was born in Dublin, and although he moved to Germany at age seven, he retained an affection for Irish music. Ormandy surpasses himself here. His renditions of selections from Herbert’s operettas are frothy and idiomatic. The wonderful violin solo in “Ah! Sweet Mystery of Life” from Naughty Marietta nearly redeems it from the treatment Mel Brooks gave it in Young Frankenstein. Ormandy concludes the selections from this operetta with a spot on “Italian Street Song.” He ends the arrangement from The Fortune Teller with gusto in “Romany Life.”

Those of us who know Hershey Kay’s ballet Cakewalk probably have heard it in Arthur Fiedler’s laid back 1958 Living Stereo recording. The work, arranged mainly from music of Louis Moreau Gottschalk, is a delightful concoction in the form of an old time minstrel show. Ormandy’s performance is far more energetic and interventionist than Fiedler’s. The opening “Grand Walkaround” features particularly spicy trumpets. “Wallflower Waltz” features the sound of a calliope. “Sleight of Feet” swings like a Broadway tune. “Perpendicular Points” has an authentic minstrel show feel. In “Frisbee,” the harp suggests a guitar. For the “Entrance of the Magicians,” raspberries in the brass suggest that these may not be the greatest practitioners of their craft. Some musical ogling goes on in “Venus and the Three Graces.” “The Wild Pony” kicks in polka time. The “Pas de Deux” features great violin and cello solos. The ballet concludes with a “Grand Cakewalk” that Ormandy renders as both graceful and comic. My preference is for Ormandy’s performance over Fiedler’s, but if you want to hear a fizzing account of Kay’s ballet Stars and Stripes, arranged from music of John Philip Sousa, you will have to get Fiedler’s disc.

Mark Obert-Thorn has done a sensational job of transferring these 1952 recordings from LP. The Kay was recorded at the same session as Liszt’s First Piano Concerto and Hungarian Fantasy with Claudio Arrau, which Sony reissued from the original master tapes in 1996. Even allowing for differences in microphone placement and balances, Obert-Thorn’s remastering of the Kay sounds significantly better. If you wish to explore the lighter side of Victor Herbert further, I would recommend two Naxos CDs conducted by Keith Brion: an album of songs and orchestral miniatures featuring soprano Virginia Croskery, and a CD of orchestral selections from the operettas Babes in Toyland and The Red Mill. Brion’s account of what he spells as Pan Americana is as good as Ormandy’s. The sound of the Philadelphia Orchestra by itself would recommend any sort of lighter fare conducted by Ormandy. But Ormandy’s interpretations of Herbert and Kay represent an ideal for the conductor’s craft, making this CD an essential part of anyone’s collection of American light music. It’s like treating yourself to an especially rich dessert without any guilt.