His only recording of the 2nd is magical - and his last ever recording, of the 1st sublime

Whilst the studio overture recording presented few difficulties, I'm pleased to report that it has been possible to make considerable improvements to the sound quality, filling out the orchestral texture considerably and bringing the whole performance to life. Likewise his final recording of the First Symphony, which was somewhat dull and flat in its original incarnation. XR remastering has worked wonders in teasing out the full impact of the Berlin Philharmonic at this historic final concert - the sound is bright and full, with real depth. I've deliberately not attempted to remove all traces of tape hiss from this recording so as to preserve as much fine detail as possible in the upper treble.

The only known recording of the Second Symphony was first discovered and issued in 1979, and despite repeated reissues, little has ever been achieved in attempts to improve the dismal sound quality of the original discs. This new XR-remastered transfer aims to change that. Whilst one must still bear in mind the abysmal state of the original, here at last is a full-bodied orchestra, with surprising upper-end extension and a far more even sound, allowing the performance to be better appreciated than ever before. A major effort has been undertaken in stitching together tiny gaps in individual notes and dealing with hundreds of bumps and clunks. Despite the loss in the quietest sections of fine detail, overall it's a truly astonishing transformation of this historic document.

XR remastering by Andrew Rose at Pristine Audio, September 2012
Cover artwork based on a photograph of Furtwängler at the Royal Albert Hall, 3 October 1948 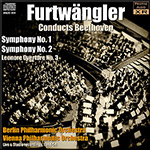 "To Furtwangler the even-numbered symphonies were not lesser but different, and his performance of the Second Symphony demonstrates the strength he found in the marrow of this work. It may be less formidable than the Third and Seventh Symphonies, but it is no less muscular and represents a broadening of Beethoven's horizons compared to the First Symphony. For some reason, Furtwangler rarely performed the Second Symphony; it was not until 1979 that this recording was discovered and issued. But though the recorded sound is poor, it is adequate enough to demonstrate what a singular approach Furtwangler took with this music. His tempos are tempestuous and brisk (even in the opening adagio and the second-movement larghetto), and his concept of the music is incisive and vivid. Apart from the fleetness and brilliance of the performance, its most interesting aspect is the way Furtwangler broadens the trio section of the third movement to create a foil for his breathless pacing of the scherzo, where all repeats are taken; only the first-movement repeat is omitted."

An essential issue on many levels.

This program is interesting as it couples part of one of Furtwängler’s last concert appearances, performing Beethoven’s First Symphony, with his only preserved performance of the Second. The program that included the First was repeated over two nights, and this presents the first of them. There are, as far as I know, five Beethoven Firsts from Furtwängler, but only the one Second. The First is reproduced here in fabulous sound. The source was Japanese JVC RCL-3333, pitched to A=447.43 Hz. The sound has great presence (as an exploration of what can go wrong with Furtwängler transfers, try The Classical Society’s transfer of the 11/30/1952 Vienna performance on CSCD 109, a car crash of an issue in just about every respect). There is no repeat for the first movement, but such is the weight of Furtwängler’s interpretation I remain unsure that on this occasion it was needed. The music is clearly prophetic of things to come. The conductor’s point-making makes complete sense, thanks to his grasp of the larger structure. Remember Furtwängler was an admirer of Schenker. There is little or no looking back to Haydn here, instead what we hear is fiery and wonderful, and truly of the Beethoven stable. The Andante cantabile is rather courtly, but concentrated. A further tribute to the transfer is that high strings are never harsh. There is a decidedly demonic slant to the Menuetto, which leads into a truly jet-propelled finale, moving headlong not through speed but through an unquenchable inner energy.

The Second Symphony, recorded in London’s cavernous Royal Albert Hall, and before the installation of the ceiling mushrooms (otherwise known as flying saucers, installed in 1969 to adjust the acoustic), is a remarkable performance. There are moments in the finale that are prophetic of the drama of Leonore/Fidelio (hence, perhaps, the filler?). A testament to Andrew Rose’s transfer is that the Vienna string sound is readily identifiable. The strings’ unanimity is remarkable in the tricky first movement (the winds are a little distanced, perhaps, and some exchanges, particularly in the finale, suffer). The most notable aspect of the first movement interpretation is the properly exploratory nature of Furtwängler’s development section. The Larghetto has real gravitas, while the fire of the Scherzo ignites the finale. This performance (transferred from an Italian EMI disc) is arguably one of the greatest this symphony has received.

The filler is the Leonore No. 3 (Musikvereinsaal, Vienna, 10/18/1953, from the same Italian EMI source). The emergence of the Allegro theme is, as one might expect, managed in masterly fashion. No sonic problems at all here with the fortes, and no sense of crowding whatsoever, enabling us to enjoy the unfolding drama. The lead-in to the annunciatory trumpet fanfares is mesmerizing; the sparsely scored passage before the scorching coda heart-stopping. The dynamism of the coda steamrolls over the decades to leave us breathless. Repeated listening (forget the first, you’ll be so carried away) reveals no loss of attention to detail on the performers’ part, and continued fidelity on the part of the recording and sterling transfer. An essential issue on many levels.