This program presents a wide cross-section of Leo Blech’s repertoire, from opera and operetta to ballet and concert music. Blech had recorded with the London Symphony Orchestra before (a pioneering Schubert 9th in 1927); but the impetus for having the present series done with them rather than with his usual Berlin State Opera Orchestra may have been HMV’s contract with the LSO, which mandanted a certain number of sessions each year with the ensemble.

Over three days of recording in both Kingsway and Queen’s Hall, Blech led the orchestra in some 23 sides, all but three of which are presented here. (The odd side, the Mozart Divertimento Minuet, had to wait until the following year for Blech to record a discmate with the Berlin Philharmonic.) The missing items from the London sessions, all by Mendelssohn, were two orchestrated “Songs without Words” on a 12-inch side, and the finale of the Italian Symphony on two 10-inch sides. (Longtime Blech reissue collectors may have them on the 1978 Past Masters LP, PM-14.)

The sources for the transfers of the Cherubini and Mendelssohn works, as well as the last two Grieg dances, were American Victor “Z” pressings. The Mozart ballet music and the Brahms Serenade movements came from pre-war Victor “Gold” label pressings, while the first two Grieg dances came from a later “Silver” label disc. The Weber overture was transferred from an Italian Voce del Padrone pressing, and the remaining items came from British HMV shellacs.

An electrical problem in the original recording sessions produced low frequency sputters and pops on several of the masters. These are particularly noticeable in the quiet passages on the first side of the Mendelssohn. I have removed the worst of them and attempted to filter the rest, but some of the noise remains on a few of the recordings. 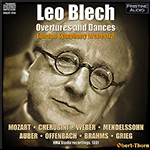 Cherubini (1760-1842), an old friend of my youth, is remembered by only the overtures of his operas. I should like to see one of them. Perhaps this classical soul was too easily satisfied with a libretto- -a weakness that has put many an opera on the shelf, though I do not think it is entirely crippling. "Anacreon, or Fugitive Love," came out in 1803, and went in very soon after. The overture is the kind of music that, I think, can be heard now and again with brisk pleasure. There is a pompous chordal preface, and then some sweet wood-wind calls and answers. The material deals considerably in one or two figures (mark the quiet start, and the long crescendo, a plan which Rossini used so freely). The music is no brain-stormer, or barn-stormer rather, a mostly-Mozartean spirit working with French needs in view. Anacreon may not be the ideal subject for an opera, though he sang of themes that filled so many stages—pleasure, the sportive life, lyricism, and the grape (without a headache) ; not forgetting lovely woman, bless her, who, as the poet sings, denied the weapons of all other creatures, is given " Beauty ; this Both her arms and armour is : She, that can this weapon use, Fire and sword with ease subdues." And so forth (but distrust the too trustful Moore's translations of what he thought was Anacreon). Dr. Blech always turns out reliable, tasteful work. The level of recording is such as my fibre can endure, and I enjoy. Enough, but not too much.

If you believe that something in the way of passion and character is missing from our current concert life, this CD will prove you right

I don’t know of any conductor today who has a sound like Leo Blech’s. I’ve never heard more disciplined playing as that on this disc, yet one doesn’t feel that it is enforced on the orchestra. Blech never is as rigid as Toscanini. Along with this discipline, there is a lightness and flexibility that informs every bar. Blech spent most of his career in the opera house, and on this disc he is revealed as the theater conductor par excellence. Always one senses the dramatic impact of the music. Born in 1871, Blech represented the best of German Jewish culture in his generation. Like Felix Weingartner, Blech is a modern conductor in every sense, yet each bar under his direction pulses with life. His prestige in Germany was such that, despite being Jewish, he was able to remain in Germany under the Nazis until 1937, four years after Bruno Walter and Otto Klemperer had left the country. Blech was also a composer, particularly of opera and operetta, and as a result he seems to confront the music from the inside out, much as Leonard Bernstein did. The works on this CD were recorded in the course of three days in London in 1931. The London Symphony under Blech’s direction never lets up, adapting with ease to a wide variety of repertoire. The overall effect is bracing and even refreshing, as Blech dusts the cobwebs off novelties and warhorses alike.

The Mozart works on this CD were great rarities in 1931. Unlike today’s maestros, Blech uses the full orchestra for Mozart, yet the effect is never lumpy or heavy handed. The overture to Les Petits Riens has warmth and grace, while the subsequent dances from that ballet possess a golden hue one associates with dances from the French Baroque. Luigi Cherubini’s overture to Anacréon brings us into the world of opera seria from the time of Spontini. Blech’s performance has an ideal blend of dramatic intensity and lyricism. The overture to Weber’s Oberon receives the wildest performance on this disc, with some tempos in the main section so quick that they virtually defy the orchestra to play them. I have heard this overture many times, and I can assure you that you never have heard it played like this. At the start of Mendelssohn’s overture Calm Sea and Prosperous Voyage, Blech creates balances that result in far more musical interest than the indifferent stasis that most conductors usually aim for in this opening. As the work ends, Blech slows down just enough to bring out the piece’s nobility.

My favorite selection on this CD is Daniel-François Auber’s overture to Le domino noir. German conductors of Blech’s generation were not known for leading French repertoire, but Carmen was a specialty of his, and he finds just the right combination of dash and mellifluousness for the Auber. In Offenbach’s overture to Orpheus in the Underworld, there is a thrill a minute. It’s amazing that the same conductor could also make the delicate tempo adjustments in music from Brahms’s First Serenade to ensure a play of light and shadow, wistfulness and energy. Unfortunately, there is a brief, loud electronic noise in the scherzo of the Brahms that is distracting. Finally, Blech conducts the most unsentimental version of Grieg’s Norwegian Dances you are ever going to hear. There is always forward motion and no dawdling, while details, such as the marcato accents in the first dance and the oboe solo in the second, jump out at you with their beauty. How Blech recorded music as different as Auber and Grieg on the same day is a mystery to me.

Mark Obert-Thorn has done a fine job remastering these 78s. The transfers are usually warm and clear, with just enough surface noise left in to preserve atmosphere and resonance. I hope Obert-Thorn will turn his attention to Blech’s great recording of Richard Strauss’s Death and Transfiguration. Should you never have heard Leo Blech conduct, this CD, with its wide variety of repertoire, is a great place to begin. If you believe that something in the way of passion and character is missing from our current concert life, this CD will prove you right.