"The exhilaration never fails in this long-phrased performance..." - The Gramophone, 1937

Although generally these transfers threatened no great difficulties, and have throughout produced excellent results, with XR remastering bringing out beautiful and clear orchestral tones and weight, the second movement of the Pastoral Symphony did produce a challenge. The original release was a dub copy of the masters, in inferior sound quality, with audible wow and a short section of the music missing. XR remastering has done a lot to improve the sound quality here, Capstan software has cured the pitch variations, and the careful "ageing" of a modern reference recording and its blending into Toscanini's recording has patched the gap.

XR remastering by Andrew Rose at Pristine Audio, July 2012
Cover artwork based on a photograph of Toscanini & a bust of Beethoven 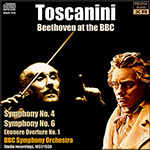 For me, how pleasant is the accident that brings to my door, for a brief hour, Beethoven's suite of pastoral romances, in these crispening winter days. This is the time to remember summer holidays, and feel the benefit of them ; the time—none better—to swing through the long, lazy day, from tramping exhilaration to the afternoon siesta and the evening sport. The exhilaration never fails in this long-phrased performance, in the recording of which I find a level of colour and sustainment, with a marking of each point of easy emphasis, that at once marks the production as one of my outstanding pleasures. We have been getting a rather wide range of reverberation-periods lately (too wide, I suggest: it is surely time for greater standardization, for records at least, to be attempted). Here I find an effect like the heightening of sensibility which many may feel when released from toil. The music seems to come with even more than its usual directness of speech; and I think I should feel that if I had no idea who were the players or the conductor. We have seen how well this band can rise to the demands of a rare spirit. Sometimes they have done so but partially. They ought to have a longer course of such refining and strengthening medicine. There is no magic in it, of course. "Integrity" is only a partial explanation—integrity of phrase. One gives most conductors credit for aiming at that; but so often other considerations are allowed to get in the way. "The single eye," again, is not enough; one may drive at some element of interpretation, and drive it out of proportion. It is the beautiful sense of proportion that always most strongly remains with you after hearing most of Toscanini's performances. There are times when some of his thought may seem less assuredly true, as in the great slowness of part of his Brahms Requiem. But never does a symphonic slow movement drag: and it is that dragging which spoils for me some parts of the work of other conductors, for much of whose thought and feeling I am grateful... .

This is a good motto-piece for those willing to believe that the world, like Beethoven, can learn to organise in the full sunshine of liberty. How excellent are the doings early on the last side, where the bustlings accompany a new idea! Those succeeding gusts of wind are given full power. The conductor shows fine style in reserving strength for the best places. It sounds almost as if the recorders had lent a hand too, on this side. The virility and flexibility of the strings is especially praiseworthy here. A grand recording.