Both recordings sound considerably better following the application of XR remastering equalisation, with the greatest gains to be had in the older recording, the 1952 Concerto No. 4, which has revealed far more top end than was apparent on the original LP. Both were generally consistent in pitch, though I have had to smooth out some wow in each recording. Both have been pitched to A=440 as heard in the 4th, whereas the 3rd was sharp.

XR remastering by Andrew Rose at Pristine Audio, July 2012
Cover artwork based on a photograph of Solomon 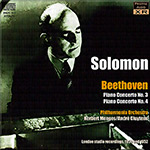 This is an extraordinarily satisfying performance of the Concerto. Solomon chooses a fairly broad tempo for the first movement and one that seems to me to be precisely right, especially as, whatever his subtleties of mood and speed, he never lets it lose momentum. There is, indeed, an absolutely sure sense of direction in this masterly playing. Masterly playing it is, too, all through, with the shaping of every phrase the result of long experience, thought and depth of feeling. Other pianists might give more sheer glitter to the finale but Solomon's rhythmic and controlled playing is enough to make it fit into his conception of the work as a whole.

Unexpectedly, he does not play Beethoven's cadenza in the first movement but one by Clara Schumann. It is a good one, developed well from the material and keeping very reasonably to the right style and I don't think many will complain of this choice.

As to the orchestral contribution, Herbert Menges is admirable, perfectly judging his opening section in tempo and manner to suit the soloist's conception and accompanying deftly throughout. The recorded sound seems excellent to me.

I have no hesitation in recommending this very strongly as a thoroughly fine performance and, indeed, it has the extra virtue (over some others) of having none of those mannerisms that can become so tiresome on repeated playings of a gramophone record. But should you imagine that that comment suggests any dullness, you will be misunderstanding me. This is the playing of a Master...

Altogether, in fact, a deeply satisfying record—and I think there is no better one of the Concerto.

Solomon and the Philharmonia Orchestra play exquisitely. That would be expected, and is in fact achieved. A beautifully clear, limpid style on the part of the soloist is matched by a perfect orchestral partnership; fundamental virtues that would make up for many other sins. In fact there is but one sin, venial and qualified at that, in the picture : a secure and clear recording expounds, presumably faithfully, a surprisingly tinny piano-tone—a point which is of some importance in a piano concerto.

Perhaps influenced by The Record Guide's sour comments on Solomon's account of the Beethoven No. 4, I have never gone back to hear it again. This time, perhaps because I was not expecting perfection, I have been enchanted. Even the subdued opening which the authors of The Record Guide object to seems to me in character with the thoughtfulness of the rest. It is true that Cluytens could match his soloist better but there is never any doubt that this performance is far preferable to the kind of runthrough (however brilliant) that we had last month from Katchen. So many passages reveal the magical way Solomon had with phrasing...

I believe any Beethoven headbanger would want to share in Solomon's insight into the score.

Aristocratic Beethoven. More from Pristine's Beethoven concerto cycle with the British pianist Solomon (as he billed himself), this time with my favorite Beethoven piano concerto, the Fourth. I don't often have a hands-down "favorite" anything, since I prefer to look at a work on its own terms. I characterize each Beethoven piano concerto slightly differently: No. 1, the best Mozart concerto not by Mozart; No. 2, a superior Mozart concerto; No. 3, Sturm und Drang; No. 4, lyrical; No. 5, virtuoso.

Solomon's chief characteristics in his traversal are his elegance of touch and phrasing. These generally serve him very well indeed. I have to admit that I like his Third the least of the cycle, but that's because I view the work fundamentally differently in character than he does.

First, for me, the Third updates Mozart's Concerto No. 24, also in c-minor, one of that composer's darkest and in many ways a foreshadowing of Beethoven's c-minor manner. Second, Beethoven had already written the Pathétique, Moonlight, and Tempest piano sonatas. The Violin Sonata No. 9 (Kreutzer) comes from around the same time as the concerto. All of these works share a tempestuous mood and aim for Romantic sublimity, rather than classical balance. Solomon simply isn't vulgar enough for me in the Third.

However, rather than complain about why Solomon's interpretation isn't mine, I'd prefer to talk about how well he carries through his conception of the score. When I say "his conception," I use shorthand, for I should also mention the conductor, Herbert Menges, since I have no way to know who took the lead here. At any rate, both Solomon and Menges seem on the same page, in that both shade most of the concerto toward the Mozartean. They observe Beethoven's contrasts, but don't make them as sharp as most others do. Menges's first-movement orchestral exposition, a model of the whole movement, builds from quiet neutrality to greater and greater tension, although the latter lacks all the drama one normally expects. Solomon, for the most part, stresses pianistic elegance, with gorgeous runs and an almost intimate conversation with the orchestra and the listener. Near the very end of the movement, the cadenza (not Beethoven's own, but Clara Schumann's -- and very good it is, too) changes all this. Despite its stylistic inconsistency, Solomon rips into it, emphasizing its futuristic modulations and wildness of expression. We end the first movement in the middle of Romantic storms.

From the first chord of the second movement, Solomon suspends time. He stretches out his phrases almost to, but not past, the breaking point. Even though they take the work at an extremely slow tempo, neither Solomon nor Menges gets stuck. In Solomon's hands, some passages seem to presage Chopin nocturnes. Equally impressive is the pianist's knowledge of when to step back and accompany, particularly in the duet between flute and bassoon, and when to reassert himself, stepping up at exactly the right moment at the end of that duet. You rarely find such chamber-playing alertness in a virtuoso.

I'd characterize Solomon's handling of the finale as "merry," rather than the usual "waspish." This definitely fits the scherzo-ish coda better. Again, Solomon emphasizes the lightness of the music and lets its power take care of itself. This interpretation may not suit everybody, but one cannot dismiss its detail, sensitivity, and historical awareness.

If you ask me (and you haven't), I'll tell you that the Fourth ranks as my favorite of the five concerti. I spent a year studying the score and know it in detail like no other. The most tightly-composed of the five, the concerto -- or almost all of it -- grows out of the opening measures for solo piano. Yet it sounds lyrical and memorable rather than pedantic. When Leonard Bernstein talks about Beethoven's "inevitability," I always think of this concerto -- superbly planned, but expressively fresh. Solomon proves himself more than equal to the challenge, giving one of the very best performances of this concerto I've heard. From the remarkable solo that opens the work, Solomon reveals not only a deep understanding of its components, but also the ability to weave a poetic statement. Given his traversals of the previous three concerto, I find odd but welcome Solomon's embrace of more muscular playing when called for. It's power without pounding, however.

Beethoven's second movement astounded the Nineteenth Century. No concerto had a movement like this before, and up to the Modern era, few after. Liszt compared it to Orpheus taming the savage beasts. Essentially an arioso recitative, it alternates growls from the orchestra with tender answers from the solo piano. Solomon impresses here with complete mastery over low dynamics -- pianissimo to piano in its first statement, mezzo-piano to slightly less than piano in the second, and so on. He reaches a brief high of mezzo-forte and immediately and gracefully comes back down to pianissimo.

Those who have paid attention will recognize the main subject of the third-movement rondo as a variant of the piano's very first phrase in the opening movement. It also has the unusual distinction of beginning in one key (C major) and magically transforming somewhere in its middle to another (G major). It drives forward, and Solomon puts out plenty of wattage, turning glittering runs into pure power.

Unfortunately, Cluytens fails to match his soloist. Under his baton, the Philharmonia is turgid and rhythmically sloppy, if you can believe it of one of the great British orchestras of the time, and all of Pristine's technical wizardry cannot save its bacon. Menges has the advantage of stereo, but even so, he gets crisp attacks and sharp rhythms from the orchestra. Cluytens does best in the slow movement, as he tries to match Solomon's dynamics, but in general he keeps the pianist's stunning performance from achieving what should have been one of the greatest recorded renditions of this concerto. Nevertheless, I believe any Beethoven headbanger would want to share in Solomon's insight into the score.