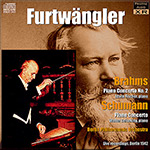 Furtwängler conducted both Brahms piano concertos during all phases of his career, but there were nearly twice as many performances of the Second, the only one to have come down to us on records. There are two versions, both stemming from the war years and separated by thirteen months; each was given as part of a subscription concert by the Berlin Philharmonic. The soloist in the first was Edwin Fischer, and in the second, Adrian Aeschbacher, with whom Furtwängler collaborated on Beethoven's First Piano Concerto in Lucerne after the war.

As with their EMI studio recording of the Emperor Concerto, Furtwängler and Fischer are again as one. Theirs is a many-faceted account of a massive score, and like the music, the performance is symphonic and far-reaching in its dimensions. With this too there is "youthful" willingness on the part of Furtwängler and Fischer to give generously of themselves. The Second Concerto is a work that conductors and performers often even out, minimizing the sweep of the first and second movements so they are more in line with the reflective slow movement and the airy grace of the finale.

Not so with Furtwängler and Fischer. They follow where the music leads and appear to revel in its many planes of sound and its contrasting emotions. With this comes the sensation of an autumn tempest eventually playing itself out and leaving in its wake coolness and serenity. In harmony with their stormy approach to the opening movement, the allegro appassionato, while not notably faster than the norm, has a livelier impulse than usual and less a feeling of binding weight. Not surprisingly, the second-movement repeat is observed in both performances, for this is an instance where a repeat in Brahms is entirely organic. Though Fischer's beautifully textured playing permeates the slow movement with a blissful, nocturnal calm, some urgency is still felt, and it emerges openly in playful, Friska-like passages in the finale.

Aeschbacher makes less of a cohesive whole out of the music. His performance is not as well thought-out, and there are moments where he strikes out on his own in a direction different from that established by Furtwängler and the orchestra. He is, on the whole, technically more solid than Fischer, though Fischer can surprise one at times with unexpected prowess, as in the rising double thirds that come early in the last movement. With Fischer, every note sounds in tempo, while Aeschbacher glibly leaves notes out. In short, there is no choice here. One is an experience; the other is a performance.

Fischer, Furtwängler and the Berlin Phil give a monumental and blazingly atmospheric performance

Given their provenance these two recordings are pretty good. That said, don’t get your hopes too high. For all the miracles wrought by Andrew Rose and his XR method these remain grainy and roughened. On this evidence it comes as no surprise to hear that they survived Nazi wartime as vintage, live concert detritus, being spirited away to Moscow as war booty and decades of storage in the USSR.

Of the two works the Brahms emerges in meaty mono and with a string sound that is better than tolerable. Fischer, Furtwängler and the Berlin Phil give a monumental and blazingly atmospheric performance with not a little pointed wit in the exultant Allegretto. It could never rate as a chosen sole representative in anyone’s collection but it would make a nice contrast for those days when you would like a few risks and maybe a modicum of bluster. It’s certainly not dull. No doubt I will provoke sighs of despair but if you are looking for something to surprise and delight in your Brahms 2 then try Serkin on Sony-CBS if you can find it. A concert discovery last year was a pretty much ideal performance by Emanuel Ax at the BBC Proms with the Chamber Orchestra of Europe conducted by Bernard Haitink. Ax and his partners delivered a joyously life-enhancing reading of each of the two Brahms concertos.

As for the Schumann it is a shade or two less desirable in comparison to the sound of the Brahms: the piano is a mite clattery, the treble hazed and the distortion crazing more obvious. The promethean power of the pianism, the clarion call to ardour and the complementary fire of the conductor and orchestra leave us grateful and ready to remember this performance with enough fondness to prompt a return visit despite the coughing. The liner-notes are rather scant but the short technical notes are well worth a read.