BRAHMS Symphony No. 4
BRAHMS Variations on a Theme by Haydn
Recorded in 1943
Total duration: 60:30 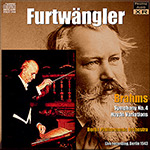 Listening to these performances of the Fourth Symphony conducted by Furtwängler, ranging in time from 1943 to 1950, one is struck by the extraordinary consistency of his vision of the piece and his approach to it. It would seem that both were so firmly set in his mind and so circumscribed by his will that there was no room possible for variation or a need to experiment with form and tempo. The massive structuring of the work is like that of the First Symphony—a granitelike monument that is equally an essay in drama and forceful dynamics—and with it Furtwängler releases a power and a sweep that match those he unleashed in the First.

Beginning with those great sighs in the violins, there is a sense of the infinite, as though the music were always there, lost in its song, a sense that Furtwängler has simply joined it at one stage of its lyrical progress. He makes the movement an ever-changing fabric of sound, urged forward through accelerandos, when the fever of the music begins to rage, and held back by equally portentous ritardandos when a significant turn in the music requires underlining.

There is little moderato and a great deal of a feeling of andante in the slow movement. Furtwängler leads the movement to the mighty swell that crowns it at the fortissimo passage just after letter E, and then he allows it to recede again into a deep-throated reseating of its principal theme in the strings alone. The third movement in mood and key echoes Die Meistersinger, and Furtwängler fills it with the sort of explosive jubilation he brought to the opera. Bursting with life and filled with theater, it is an ideal preamble for the power to come in the last-movement passacaglia.

Everything Furtwängler accomplishes in the finale reflects and grows out of Brahms's marking of allegro energico e passionato. It is fast, it has energy, and above all it is streaked with passion. Along with these qualities, there is also a dizzying sense of controlled abandon, much like the sensations felt in his headstrong realization of the variations of Beethoven's Third Symphony. It is an elation that carries us through the sectional character of the movement, binds the variations tightly together, and peaks in a coda that is Dionysian in its frenzy. Within this high-powered expenditure of energy and passion there is an amazing island of repose—the espressivo variation for solo flute, set against the woodwinds and accompanying strings.

The potential for this momentary release of tension before the great final push is, of course, a feature of the movement, but few conductors have seized upon its possibilities to such a concentrated extent, and used them to such high dramatic purpose as Furtwängler has. The most desirable of these four full versions of the Fourth is the wartime performance in Berlin; it exudes more heat and song than the others, has fewer ensemble problems than the Berlin performance of 1948, greater life than the Berliners in Wiesbaden the next year, and better sound than the Salzburg version of 1950, the only available Fourth with the Vienna Philharmonic. The rehearsal from 1948 was filmed in London.

I had been hoping that Andrew Rose would be turning his attention to these classic performances and the results are very gratifying. The XR re-mastering process adds enormous depth, weight and clarity to the sound. The nearest competition to these four discs is the 3CD set on EMI Références which offers the same recordings of the first two symphonies but different versions of the Third and Fourth. The recordings of all four symphonies on both sets are live; however, Pristine opts for Furtwängler’s final Berlin concert in April 1954 for the Third but goes back to a wartime broadcast for the Fourth, whereas EMI have chosen recordings from 1949 and 1948 respectively.

From an artistic point of view, it doesn’t always so much matter which of Furtwängler’s live recording of Brahms symphonies is selected, in that he was a very consistent interpreter; thus the main criterion for choice of recording might instead be the quality of sonics on offer. While I heartily endorse these Pristine re-masterings as easily the best available, I would not necessarily urge anyone who already owns the EMI set to acquire these latest Pristine issues, as although the EMI re-mastering by Andrew Walter from 1995 is thinner with a little more hiss, it remains very listenable. Furthermore, although I recognise that Andrew Rose has done wonders in restoring and preserving this terrific performance of the Fourth Symphony from 1943, for the purposes of general listening the 1948 version on EMI is easier on the ear and freer of the bronchial eruptions which mar the December 1943 concert, when the Berlin audience sound especially afflicted by the winter chill.

The watershed in the history of recording between the jettisoning of 78s and the advent of magnetic tape and the LP is evident from the consequent leap in sound quality of the newer technology; it is thus all the more regrettable that the tape machinery used by EMI in 1949 to record the Violin Concerto in Lucerne produced such a gritty sound in the higher frequencies, especially of Menuhin’s violin. Those who already have these recordings on EMI or another label might consider giving priority to purchasing the third Pristine disc above, in that although a bargain coupling of the Violin and Double Concertos is available on EMI, Rose has done much to tame the scratchiness and give us the most satisfying re-mastering so far. Furthermore, the Pristine CD couples the Violin Concerto with a superlative performance of the Third Symphony. This is the most recent of the recordings here, made shortly before Furtwängler’s death in 1954 and hence not only in the best sound but also the fruit of the conductor’s conviction that he had finally understood the work.

The performances themselves have long been a by-word for emotional intensity and fluid mastery of the scores. Furtwängler is merciless and uncompromising in driving home the searing emotional honesty of Brahms' symphonies; nothing is prettified or extenuated, so you hear the gritty reality of Brahms' struggle with music that expresses his metaphysical battle with despair and discouragement. Chords are driven home like structural supports into the earth; there is astonishing energy and attack in the emphatic passages contrasting with the swooning, elastic Schwung of the lyrical episodes. Furtwängler was always able to apply the myriad fluctuations in his tempi without their sounding applied or self-conscious; here they sound spontaneous and organic, and the effect is often overwhelming. The opening of the First Symphony becomes a titanic effort first to depict and then to shake off the weight crushing the human spirit. Nobody, except perhaps Karajan in his live performance in the Festival Hall in October 1988, quite catches the desperation of that turmoil. Similarly, despite the papery sound and the occasional distortions at climaxes, the “Allegro energico e passionate” finale of No. 4 is devastating; the brass and timpani emerge with real impact. Yet Furtwängler is also wholly capable of capturing the delicate grace of the Allegretto of the Second and the bitter-sweet lilt of the Poco allegretto in the Third.

The Violin Concerto commemorates a happy collaboration between the conductor and Yehudi Menuhin. Never the possessor of the most succulent tone, Menuhin does not achieve Milstein’s sweet rapture or Oistrakh’s burnished glow but his serene, radiant account is mercifully free of the intonation problems which could afflict this great artist in later years.

Furtwängler’s impassioned accompaniment lends great intensity to Brahms’ sweeping melodies and the soloist responds in kind. The much improved sound allows the beauty to emerge not only of Menuhin’s violin but also of other solo instruments such as the gorgeous principal oboe in the Adagio. The Allegro finale stays close to its gypsy roots, played not too hectically but with great élan.

The First Symphony, Double Concerto and Haydn Variations are all from the same concert in the Grosser Musikvereinssaal on 27 January 1952 - what a programme! It might have been even better: it was originally envisaged that Oistrakh and Casals were to be engaged but as it turned out Furtwängler had to settle for his own concertmaster and principal cellist in the Vienna Philharmonic – not too much of a compromise given that they were Willi Boskovsky and Emanuel Brabec. Furtwängler’s conception is sombre, tragic and Romantic; the performance starts a shade tentatively but soon catches fire despite a certain deliberateness in the phrasing. The Andante is serene without dragging and the textures are rich, requiring the soloists to dig deep to ensure that they are heard against the orchestral tutti.

Of the two “Haydn Variations” here, the later 1952 performance is weightier – even a little ponderous – and in considerably better sound than the slightly swifter, lighter 1943 account, with less audience noise. The EMI Références set offers yet a third recording from 1949, the only studio recording. All three are very fine but not so different that I think you need them all; they are all affectionately and exuberantly played but the Andante in 1952 is particularly grand and my preference would be for that later version in best, if slightly tubby, sound.

The three Hungarian Dances on the first disc are similarly joyous and released; as always Pristine have done a wonderful job in cleaning up the hiss and providing a rich, warm ambience.

These four discs may be purchased bundled as a download. For those who have noticed that the CD serial numbers are not sequential, PASC 343 is a Cantelli issue. My review copy of PASC 340 has a misprint in the listings which will no doubt be corrected: it contains Hungarian Dance No.3, not No.2.