Cantelli in superb form with the New York Philharmonic-Symphony

The recordings here stem from a number of sources collected by Keith Bennett and donated for transfer purposes to Pristine Audio for this release, for which we are most grateful. There is some slight variability in sound quality between the sources, but overall the sound is good, with perhaps the Strauss and Busoni surpassing that of the Cherubini. The final pitching of the recording was determined by careful analysis of residual 60Hz electrical hum and suggested the orchestra was playing very slightly sharper than standard concert pitch of A4=440Hz - I have elected to retain the actual pitch of the concert rather than "correct" it.

As Mr. Bennett's notes make clear, this was not the complete concert. The final work played on the day was Ravel's Boléro, and this appears on an Italian CD credited to this performance. A number of factors led us to the suspicion that this might not be a genuine recording from this concert - not least technically. It's pitch is considerably different to that of the rest of the concert when corrected to a 60Hz analysis, and also varies considerably by comparison to a good "flat" pitch recording of the rest of the concert, which suggests at the very least a different tape machine and, more than likely, a different concert.

However, to ensure we were not missing out on a complete recording, Mr. Bennett contacted both the New York Philharmonic Orchestra and Carnegie Hall's archive department. Both were adamant that not only was the Ravel not broadcast, but that that part of the concert had not been recorded either in-house or off-air. We do not know, therefore, who is conducting and playing the purported Cantelli Boléro, nor when or where it was recorded. This release contains all that survives from the present concert.

XR remastering by Andrew Rose at Pristine Audio, May 2012
Cover artwork based on a photograph of Guido Cantelli
Original recordings from the collection of Keith Bennett 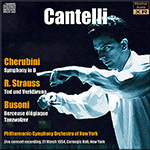 The works for this programme is interesting. As far as the Cherubini symphony is concerned a more comprehensive  account is to be found on Pristine Audio PASC 319, a CD which also includes Strauss’s Tod und Verklärung  both being part of Cantelli’s 29th appearance with the NBC Symphony Orchestra on 27 December 1952. On this present CD the performance of the Cherubini is only fractionally quicker than the rendition given by the NBC Symphony Orchestra but there is a more substantial  difference for the Strauss - 22:21 here as opposed to 23:28 in the earlier performance. Incidentally, that 1952 performance is closer both to Strauss’s  and Toscanini’s interpretations.

However, collectors will be more interested in having the two pieces by Busoni. The composer was profoundly affected by the death of his mother on 3 October 1909 and he returned to a little piece for piano entitled Berceuse which he had composed earlier in the year. He conceived the extended orchestral version which we know as Berceuse élégiaque and this was completed on 27 October 1909. For once in his life Busoni carried out the menial task of writing out the orchestral parts no doubt because he was very much aware that the work contained a number ‘singular harmonies and instrumental harmonies which have not yet been approved’ and it took a half hour rehearsal with the Queen’s Hall Orchestra (granted by Henry Wood) on 1 November 1909 for Busoni to be satisfied that what he had written and now had the opportunity of hearing was what he intended. The score is specific regarding the number of musicians required and rarely departs from Andantino calmo only rising to forte briefly in its 118 bars. Even if some commentators feel that the work is not significant in Busoni’s oeuvre, that is not what the composer himself felt about it explaining ‘I have succeeded for the first time in creating an individual sound and dissolving the form into feeling’: from the listeners standpoint the near static tempo, Andantino calmo, creates the numbness of grief.

Although Oskar Fried ran through the work in 1910 with the Berliner Philharmoniker, it had to wait until 21 February 1911 for its first performance when Gustav Mahler included the work in 1911 for its first performance in a concert consisting of mainly of Italian music at his final concert in New York. The composer acknowledged the applause from a box: in that box was Arturo Toscanini and when Busoni wrote to his wife he mentioned that the Italian conductor had expressed great admiration for the piece. Toscanini gave six performances with the Philharmonic-Symphony Orchestra of New York between 1929 and 1932, but then there was a considerable gap until he gave a performance with the NBC Symphony Orchestra on 13 March 1948.

Cantelli recorded the work with the Orchestra Stabile dell’Accademia Nazionale di Santa Cecilia on 10 May 1949 and initially approved the recording for issue on 21 September. However, after he had taken the test pressings for Toscanini to hear he adamantly refused to countenance the release.  Was it just a coincidence that Toscanini conducted the piece again on 10 December 1949?

Cantelli was due to begin his second stint with the NBC Symphony Orchestra on 24 December and he could already have been in New York at the time of what was to be Maestro’s final performance of  the Berceuse élégiaque: perhaps Toscanini was showing his younger colleague just how it should be played. Interestingly, although the Berceuse élégiaque can be numbered as among Cantelli’s core repertoire (he gave 28 performances with twelve orchestras) it was not until 1951 that he programmed the work in the USA and never once did he include the work during his stints with the NBC Symphony Orchestra. The composer’s suggestion for a performance was approximately 10:00: of the two Toscanini performances (which were made available to the author by John Canniel) his slower was the 1949 rendition (8:15). On this CD Cantelli gives his quickest performance (7:54), but all the performances by Cantelli and Toscanini are respectful of the composer’s wishes in terms of dynamics.

Whereas, apart from 1950, Cantelli conducted at least two performances of  the Berceuse élégiaque every year from 1946 until 1954, he only gave  five performances of  Tanzwalzer. He first included the work in an Italian concert given in 1948 given in Italy, the second was in 1950 with the NBC Symphony Orchestra which has been issued in a box of four CDs (Testament SBT4 1317) and finally three more performances were given in 1954, and this CD preserves his very last performance.

Busoni was an intensely serious musician but he needed to compose lighter works to keep his equilibrium. Such a work is Tanzwalzer for which he wrote the entire sketch on 19 September 1920 and completed the full score less than a fortnight later on 1 October. The composer provided a brief note for its first performance: ‘The Tanzwalzer was written originally in jest (and as a personal test of my own lighter talents) inspired by strains of a waltz issuing from inside a coffee-house, heard from walking in the street The work is dedicated to the memory of Johann Strauss, whom the composer sincerely admires’.

Whether Cantelli ever perceived any music as a jest is open to speculation. As one would expect, Cantelli is generally respectful of the composer’s wishes (admittedly adding a crescendo at Figure 7 before asking the first violins to provide a ravishing ppp on the high E) and takes all the repeats. His performance (7:54) is some half a minute quicker than that of 1950 .

A final comment is required to justify the exclusion of Ravel’s  Bolero which was the final item in the programme. As usual, the last concert in a group of performances was  broadcast, but it was a fairly common occurrence for the final item in a concert not to be transmitted. There existed a recording on the long-defunct AS disc (AS 547) which purported to be from the concert given on 19 March,  but despite numerous enquiries it has not proved possible (so far!) to establish incontrovertible evidence that the performance on AS 547 is indeed from 19 March or, even more unlikely, from 21 March. For that reason, the decision was taken not to use that recording on this CD.

Keith Bennett is the author of Guido Cantelli – Just Eight Years of Fame (published 2009) which is only available from GC Publishers.
For further details either write to GC Publishers, 21 Nunn Close, Martlesham, Woodbridge, Suffolk IP12 4UL, UK or e-mail cpublishers@keithbennett.waitrose.com

This issue will be self-recommending to all admirers of this great though short-lived conductor.

This release contains almost all of a Cantelli concert from March 1954. Missing is the piece with which the concert ended, Ravel’s Bolero. Cantelli expert, Keith Bennett, tells us in his notes that there has been at least one recording issued which purports to be of Cantelli’s performance on that occasion. However, he’s been unable to establish definitively whether the recording is the genuine article - reading between the lines, one suspects it’s spurious. The present transfers, by Andrew Rose, are from Keith Bennett’s own collection and Rose seems to have done a very good job. The sound is good and wears its near-sixty years well.

The Cherubini symphony has never really established a place in the repertoire. However, Toscanini took it up and in a note accompanying Cantelli’s 1952 broadcast of the work (PASC 319) Keith Bennett suggests that Toscanini’s example inspired Cantelli’s interest. Apparently he was scheduled to conduct it again in New York in December 1956, a few weeks after the plane crash that cost him his life. It may not be a great symphony but Cantelli pays it the compliment of taking it very seriously. He gives a spirited account of the first movement and shapes the second movement elegantly. He secures strongly rhythmical playing in the Minuetto and the playing in the finale displays high levels of energy. I haven’t seen a score but it’s noticeable that the finale runs for 4:40, making it the shortest movement in the work - by contrast the first movement plays for 10:18; I wonder if Cantelli omitted some repeats or if the movement is genuinely so short.

Tod und Verklärung comes off well, perhaps because Cantelli is fairly sober in his approach. He generates good atmosphere in the quiet opening pages and then in the much more urgent section (4:44 - 8:02) he really whips the orchestra up, though without doing anything to excess. The final revelation of the Transfiguration music itself (17:26) is noble - and Cantelli’s handling of the preceding pages, preparing for the theme, is exemplary. The piece isn’t one of the composer’s finest but Cantelli’s way with it is very persuasive.

The Busoni Berceuse is an expanded version of a piano piece, which Busoni re-worked in response to his mother’s death in 1909. Most of the music is subdued in tone and delicate and Cantelli leads a refined and sensitive account. By contrast Tanzwalzer represents Busoni in a lighter vein and Cantelli performs it with flair.

This is yet another release of live performances that show us what an exceptional talent was Guido Cantelli. The attractions of this disc are increased by the general rarity on disc of some of the repertoire. Cantelli gets some excellent playing from the orchestra and this issue will be self-recommending to all admirers of this great though short-lived conductor.