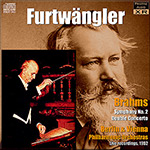 The Double Concerto was recorded at a live performance. Willi Boskovsky had been the VPO's concertmaster since 1939, and Emanuel Brabec was the orchestra's principal cellist. The acoustic is a little confined, and the solo cello seems to catch the microphone slightly, but the balance is reasonably good and the sound itself quite clear. The performance starts unpromisingly, with fairly ordinary contributions from the soloists and a rather heavy tutti from Furtwangler, but as the first movement procedes a greater spirit grows, and soon soloists and conductor establish a good rapport. The stow movement is given a lovely, serene performance, although the finale is taken at a dangerously slow tempo. There are some good touches here but a somewhat strained, impatient quality in the solo playing, as if Boskovsky and Brabec wanted to escape from the orchestra's somewhat lumbering presence. This is a flawed performance, then, but it has thought-provoking and stimulating qualities too.

We are so accustomed to analyzing the interpretive depth Wilhelm Furtwängler achieved that we often forget what a technically gifted conductor he was. As these remasterings by Andrew Rose reveal, Furtwängler could get the most gorgeous sounds out of an orchestra. His baton technique certainly was idiosyncratic, but he had no trouble attaining what he wanted. He also was an indefatigable rehearser. Georg Solti relates in his Memoirs Furtwängler’s pleasure at Salzburg when Solti told him how much better the Vienna Philharmonic played for Furtwängler than for Karajan. Much of Furtwängler’s sway over an orchestra derived from sheer force of personality. A member of the Berlin Philharmonic tells of how when rehearsing under another conductor, the orchestra’s sound changed entirely after Furtwängler just walked into the hall. Thanks to Andrew Rose, we now can hear how central the concept of sound was to Furtwängler’s interpretations of Brahms. There is much beauty of thought here certainly, but the sonic sybarite will derive much pleasure as well. Brahms was a great craftsman, and the importance to him of creating lovely sounds should not be underestimated.

As a composer, Furtwängler could take the occasionally disparate elements of Brahms’s First Symphony and find inherent structure and drama. The introduction to the first movement is almost conversational, summarizing and prefiguring the subsequent drama like a Shakespeare prolog. The Allegro possesses weight and gravitas. It alternates between reverie-like fantasy and the onslaught of fate. The movement maintains a noble character, even when tragedy lurks around the corner. Nevertheless the movement never seems episodic—its transitions are finely judged. Furtwängler treats the slow movement as an intermezzo, with phrasing that is highly vocal and operatic. It acts both as a pause in the drama and an intensification of the feelings so far evoked. The third movement is a quasi scherzo. Its B section (like a trio) brings back life’s rough and tumble, before fate in the brass and in pizzicato strings mark the return of the A section: an allusion to the brass in the third movement of Beethoven’s Ninth. That symphony is even more eloquently drawn upon in the final movement. Its introduction portrays whole worlds passing before our eyes, then disappearing. Suddenly, the great string tune brings us to a place of peace and satisfaction. This is followed by excitement, even at times jubilation. An ominous shadow eventually falls over the music, which the coda pushes aside—leading to the triumph of the great brass chorale. Furtwängler resists the temptation to speed up from here, and the symphony ends on a majestic note.

Furtwängler’s Haydn Variations are unusually somber, slower than his December 1943 Berlin recording. The statement of the theme offers lovely wind and horn choirs; the uniqueness of the instruments used by the VPO contributes a special glow. Furtwängler’s tempos allow for the articulation of all the instrumental parts, including some often glossed over. The third variation contains a slight horn bobble. The fourth and seventh variations could stand alone as genre pieces, small elegies. The finale is alternately stately and tender, evincing an emotional vulnerability rare for any conductor. The three Hungarian Dances are hardly mere fillers. No. 1 features gorgeous, elegant string playing. In No. 2, Furtwängler creates a real gypsy feeling. He revels in the kaleidoscopic orchestration of No. 10.

Furtwängler’s Brahms Second is less strikingly individual than his First, but it is no less persuasive. In large part it is a showcase for how well the Berlin Philharmonic can play. Four years earlier, in 1948, Furtwängler made a studio recording of the Second with Eduard van Beinum’s London Philharmonic. Although the timings of both performances are similar, the LPO version sounds more reflective, perhaps marking Furtwängler’s reaction to traditional English string sound. The Berliners offer more fire power than the LPO, and their reading under Furtwängler not surprisingly sounds more extroverted. The naturalness of the interpretation reminds me of William Steinberg’s LP, although his Pittsburgh Symphony does not ascend to the heights of the BPO. Furtwängler’s first movement is a brilliant study in light and shadow, like the clouds in a painting by John Constable. The brass have a field day. The next movement features phenomenal string playing. The coloring of the orchestra here makes me think of Vaughan Williams’s “Pastoral” Symphony, a reminder that Brahms’s Second has been called his “pastorale.” The third movement is truly grazioso, with elegant winds and subtle strings. In the last movement, Furtwängler unleashes the orchestra to brilliant effect, with meditative sections alternating with something like mania.

The Double Concerto receives a distinctive performance. It is a relaxed partnership between soloists and conductor, with plenty of give and take. Admirers of the more propulsive versions by Toscanini and Szell may be disappointed. The soloists, first chairs of the VPO, can stand comparison with more renowned players. Willi Boskovsky is well known as both soloist and conductor, while cellist Emanuel Brabec made a superb recording of Strauss’s Don Quixote with Lorin Maazel. In the opening dialog between the soloists, Brabec’s tone is especially rich and woody. Furtwängler’s basic tempo in the first movement’s tuttis strikes a golden mean, although he leaves the soloists a lot of latitude. The second movement is lovely, played with great affection by Boskovsky and Brabec. The tempo for the last movement is measured, yet everyone displays genuine passion.

The Vienna recordings all were made in the Great Hall of the Musikverein, and are excellent monaural. The Second Symphony, from the German Museum in Munich, is slightly muddy in places but otherwise quite fine. When Furtwängler recorded the Second Symphony with the LPO he insisted on a single microphone. It would be worth knowing whether he made the same requirement here of EMI. If you are interested in stereo CDs of these works, I would recommend Bruno Walter in the First and the variations, Antal Doráti in the Second, and Gidon Kremer, Mischa Maisky, and Leonard Bernstein in the concerto. Andrew Rose should consider remastering Eugene Ormandy’s late 1950s LP of the First Symphony, a reading of poise and elegance. Furtwängler, as usual, is indispensable to a fuller understanding of this music. These new remasterings heighten our appreciation of this conductor’s feeling for Brahms’s beauty and sensibility, and as such are warmly recommended.