The start of a beautiful friendship...

Mercury was quick to sign up Paul Paray and the Detroit Symphony Orchestra, and the earlier of the two LPs represented here, their recordings of February 1953 of Rimsky-Korsakov's Capricicio Espagnol and Ravel's Boléro were the first recordings of a lengthy collaboration between the musicians and the record company. Despite there being only 10 months between them, these recordings do seem slightly less polished technically than the later work on this release.

Boléro was a clear case of "fader riding" - the microphone had been turned up to full gain to capture the quiet beginning and then gradually reduced in level to compensate for the huge rise in orchestral volume throughout Ravel's lengthy crescendo. I've tried to compensate for this and return some of the orchestra's full dynamic range in this restoration, as well as considerably improving the orchestral tone throughout.

XR remastering by Andrew Rose at Pristine Audio, May 2012
Transfers from Mercury LPs by Edward Johnson
Cover artwork based on a painting of Rimsky-Korsakov by Valentin Serov, 1898 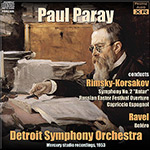 Sleevenotes from the original LP

About PAUL PARAY and the DETROIT SYMPHONY ORCHESTRA

Because of Paul Paray's tremendous vitality and kinetic energy, his very presence at an ordinary social gathering seems to electrify the atmosphere. Such is the sheer personal impact of this remarkable artist who in the fall of 1952 took over the musical destinies of the Detroit Symphony Orchestra which Mercury is so proud to present on its Olympian Series recordings.

The Detroit Symphony Orchestra came into existence in the spring of 1914. Four years later, when the renowned conductor-pianist, Ossip Gabrilowitsch, began his long association with the Orchestra, Detroit became the proud possessor of one of the nation's great symphonic organizations.

The death of Gabrilowitsch in 1936 ushered in a difficult transition period for the fortunes of Detroit's orchestra; but by 1951 it had become very plain to all music-minded citizens of the Motor City that support of a great symphony orchestra must be the cultural responsibility of the entire community. Thanks to the leadership of John B. Ford, Jr. and Jerome H. Remick, Jr., the Detroit Symphony Orchestra came gloriously into its own once more when, on the evening of October 18, 1951, Paul Paray conducted the first concert of a completely re-organized ensemble, and this marked a new era in the musical life of Detroit.

Paul Paray, whose personal and musical dynamism has created considerable excitement in Detroit and elsewhere in the country where he has appeared as guest conductor, is a musician of singularly wide background and experience. In 1911 he was a Prix de Rome winner at the Paris Conservatoire; but his subsequent musical activities were interrupted by combat duty in World War One. Only in 1918 did young Paray embark in earnest on a conductorial career. First he was appointed assistant conductor of the Lamoureux Orchestra in Paris; then in 1923 he became that orchestra's permanent leader. Nine years later saw Paray taking over the famous Concerts Colonne in Paris, succeeding Gabriel Pierne. Paray's American debut was with the N. Y. Philharmonic-Symphony at Lewisohn Stadium, where he scored a dazzling personal triumph and was acknowledged as one of Europe's greatest masters of the baton; but again the onset of war made it impossible for him to follow up his initial success. The war and occupation years in Paris saw him defying the Nazis at every turn, using the power of music and of his personal prestige as his principal weapons. Only when his own life was in immediate and deadly peril did he "exile" himself to Monte Carlo until after the liberation, when Paris welcomed him home as a conquering hero.

It was in 1951 that Paul Paray, now an Officer of the Legion of Honor and a "Membre d I'lnstitut", returned to America, there to conduct the first five concerts of the reorganized Detroit Symphony Orchestra. So overwhelming was the power and vitality of his musicianship that his appointment as permanent conductor was assured; and in the fall of 1952 Paray was proud conductor of an expanded 104-piece Detroit Symphony boasting in its first chairs and in its ranks some of the finest musicians in the country.

As in all the LIVING PRESENCE symphonic recordings made under the celebrated Olympian Series and Golden Lyre imprints, Mercury has employed here its unique recording technique based on the use of a single Telefunken microphone hung about 15 feet directly over the conductor's podium. Fairchild tape recorders have been used both for recording the actual perform ance and for the processing from tape to disc. This last was done in conjunction with the newly developed Miller recording cutter driven by the Mcintosh amplifier, and operated in conjunctior with the Fine-Fairchild Margin Control technique of continuously variable pitch and variable depth of cut—thus assuring a 100-percent reproduction in disc form of the recording captured originally on magnetic tape,

FOR BEST RESULTS, this record should be played at FULL ROOM VOLUME. Only in this way will the quieter musical passages be heard in proper relationship to the full orchestra climaxes.

I recommend it especially for its fine performances of the “Antar” Symphony and Bolero.

After achieving striking success with recordings of the 78-rpm era, Pristine’s Andrew Rose has increasingly applied his proprietary sound restoration techniques to those of the 1950s. Mercury’s Living Presence recordings have always been highly regarded in audiophile circles, so the need for Rose’s intervention is less immediately apparent here. I do not have the Mercury editions of any of the pieces on this disc, and none are currently available, so direct comparisons are not possible. Recorded in February 1953, Capriccio espagnol and Bolero are from Mercury’s first sessions with the Detroit Symphony, and Rose writes that these recordings “seem slightly less polished technically” than the other pieces on the disc, which date from 10 months later. Bolero in particular showed evidence of gain riding, which Rose sought to reverse in his restoration. The review disc uses Pristine’s “ambient stereo” processing, which seeks, as Rose describes it, to “extract from a mono recording … room ambience and spread it into the stereo field.” But the source remains mono and the processing does not seek to divide the direct instrumental sound between two channels. A straight mono version is also available from Pristine for those who desire it. The sound of the review disc, although yielding something in spaciousness and detail to more modern productions, still possesses more of those qualities than one would expect. The results are especially impressive when the orchestra is playing flat-out, and one would be hard-pressed, in a blind test, to identify this sound as emanating from mono recordings of the early 1950s. At lower levels, the sound sometimes shows its age to a greater degree, losing immediacy and tonal color, but at other points remains luminous, clear, and open. Although presumably dubbed from LPs, the Pristine reissue seems free of any noticeable surface noise or defects.

French conductor Paul Paray (1886–1979) headed the Detroit Symphony from 1952 through 1963. As the performances on this release demonstrate, he had a penchant for swift and firmly sustained tempos, precise and well-defined rhythm, and incisive phrasing. He offers a straightforward performance of Russian Easter, steady in the opening slow section, fast and firm for the main tempo, still faster at the end. His timing of 13:23 shaves one to two minutes off the performances of Neeme Järvi (DG), Antal Doráti (Mercury), Evgeny Svetlanov (Warner), and Gerard Schwarz (Naxos). The results are bracing, if missing some of the expansiveness and epic breadth others have brought to the piece. In Antar, the lengthiest work on the disc, Paray’s urgent, incisive, and firmly paced approach is a complete success. Paray is less flexible and linear but just as thrilling as his countryman Pierre Monteux in the latter’s 1946 San Francisco recording (RCA, available from ArkivMusic). Järvi (DG) seems by comparison a bit too relaxed and drawn-out, lacking Paray’s tension and energy. Paray also gets though Capriccio espagnol more quickly than most, with a timing of 14:33. The Alborada is a bit hurried, especially in its second appearance. The variations seem too metrical and rather lifeless at the beginning but improve once the music becomes more assertive. The two concluding sections (which account for more than half the total length of the piece) are excellent, rhythmically incisive and gratifyingly propulsive without being overdriven.

Paray and the Detroit Symphony recorded Bolero again in 1958, in stereo, and the Mercury CD reissue of that recording is still available through ArkivMusic, but I do not have it available for comparison. With a timing of 13:02, Paray is characteristically brisk and rhythmically incisive in this 1953 performance. (For comparison, Monteux, on Philips, is 15:23; Boulez, on DG, is 14:58; Gergiev, on LSO Live, is 15:46.) I very much like Paray’s crisp and urgent approach, which helps to stave off the monotony that can creep into this piece at a slower pace. In fact, I haven’t enjoyed Bolero so much in years.

Under Paray, the Detroit Symphony plays for the most part with tight discipline, incisive attacks, and brilliance and solidity of tone, although there are occasional minor imperfections of execution. Paul Paray was a major representative of the French conducting tradition, and this release is a worthy addition to his currently available discography. I recommend it especially for its fine performances of the “Antar” Symphony and Bolero.