Although both recordings were made together in 1957, and therefore both, presumably, in stereo, I have been unable to track down a stereo release of the Dello Joio, which originally paired Vincent's Symphony in D on a mono Columbia release. The latter was later reissued in stereo, accompanying his Vincent's Symphonic Poem after Descartes, recorded in 1959. All three recordings were well made for their day and sound splendid in these new XR-remastered transfers.

XR remastering by Andrew Rose at Pristine Audio, April 2012
Cover artwork based on a photograph of Eugene Ormandy 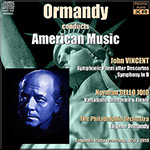 This disc represents Ormandy at his very best

Eugene Ormandy explained that he did not program as much new music as his predecessor in Philadelphia did because he “was not as handsome as Stokowski.” Nevertheless, Ormandy advocated contemporary American music throughout his career. Not every composer was pleased with Ormandy’s attention. George Rochberg, according to our mutual friend Morris Goldberger, hated Ormandy, although he admired a maestro of similarly conservative tastes, Lorin Maazel. I can’t imagine the composers represented on this CD having any qualms about Ormandy’s performances of their music. This disc represents Ormandy at his very best.

I never had heard of the composer John Vincent, and indeed these are the only recordings available of his music. That is a great shame, because Vincent is a richly romantic composer and a beautiful craftsman. He had wonderful teachers: Frederick Converse, George Chadwick, Walter Piston, and Nadia Boulanger. In 1946, he succeeded Arnold Schoenberg as composition professor at U.C.L.A. Vincent wrote his Symphonic Poem after Descartes in 1958, and Ormandy recorded it the following year. It is influenced by a certain symphonic poem after Nietzsche, Strauss’s Also Sprach Zarathustra. As with Strauss, there is a broad orchestral canvas, alternating between contemplation and incident. Vincent reveals a passion for philosophy in music that can pose questions. The work has cumulative power and majesty, with especially telling use of brass choirs. Vincent’s one-movement Symphony in D comes from 1954, and Ormandy recorded it in 1957. It owes something to another one-movement symphony, Sibelius’s Seventh, of which Ormandy was a fine interpreter. Vincent employs compressed thematic material, skillfully developed. His orchestration has a romantic fullness. Subtitled “A Festival Piece,” the symphony becomes joyous and celebratory, with telling use of brass fanfares and percussion.

Norman Dello Joio’s Variations, Chaconne, and Finale won the New York Critics Circle Award in 1948. Ormandy recorded it at the same session as Vincent’s symphony. The piece is a reworking of Dello Joio’s First Piano Sonata, a lovely short work from 1943 that has been beautifully recorded by Debra Torok. The skill with which Dello Joio elaborates this material into a longer work for orchestra is especially admirable. The opening variations are elegant and deft, and beautifully orchestrated. They are pervaded by a feeling of melancholy daydreaming, alternating with agitation. The chaconne presents satisfyingly shifting sonorities at a stately tempo. The finale is busy and exciting, ending with a vigorous brass chorale. If you are taken with this music, you might enjoy another piece of Dello Joio’s from this period, his Variations and Capriccio for violin and piano, which has been admirably recorded by Elmar Oliveira and Robert Koenig.

The Vincent works also are available on an Albany CD I haven’t heard, but I can’t imagine anyone not wanting Andrew Rose’s transfers on this disc. The Dello Joio comes from a monaural LP and is presented in what Rose calls “ambient stereo.” No matter, it is one of the most beautiful monaural recordings I’ve ever heard. As a test, I played the 1991 Sony CD of Ormandy’s Tchaikovsky Sixth Symphony, recorded in the same locale, the Broadwood Hotel, one year after Vincent’s symphonic poem. There is no comparison: Rose’s remasterings are far more musical. Now that his attention has turned to Ormandy’s performances of American music, perhaps Rose will remaster Ormandy’s monaural recording of the complete ballet score of Copland’s Appalachian Spring. Ormandy gave us only the suite in stereo. Considering Rose’s success with the stereo recordings of John Vincent’s music, there’s every reason for him to turn to Ormandy’s accomplishments in the standard repertory in stereo. Ormandy’s Philadelphia Orchestra was one of the glories of Western civilization, and we deserve to hear it in the best available sound possible.