Coppola turns his talents to German composers, with superb results

The sources for the transfers were French Deccas for the Schumann ‘Spring’ Symphony; Disque Gramophone pressings for the ‘Rhenish’ and the Parsifal excerpts; and a first edition late Orthophonic American Victor pressing for the Salome disc.

Producer and Audio Restoration Engineer: Mark Obert-Thorn
Cover artwork based on a photograph of Piero Coppola 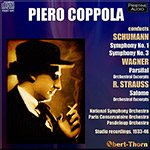 That Coppola had a particular affection for Schumann we already more than suspected; now he brings to this performance an altogether outstanding sympathy and a close understanding of Schumann's essential warm-heartedness and naïveté, at the same time securing a cleanness of texture which is by no means common. He allows the music to be sentimental without becoming mawkish, and naif without being gauche.

The performance, as I have indicated, is a most satisfactory one. Coppola takes the fairylike finale at a very steady speed, producing a grazioso and slightly square effect totally different from that produced by Koussevitzky, who took it, I seem to remember (I speak without having the discs at hand) a good deal faster. At the same time, I do not agree with taking the coda of the scherzo so slowly: the tempo does not change to un poco più lento till 16 bars later. The balance of the orchestra is reasonably good, though the timpani are generally weak, and the cantabile tone of the first violins a little pallid. But it is a relief to hear a flute solo at the right level without it being boosted into the foreground. Once again, to my annoyance, Decca have managed to arrange these compulsorily auto-coupled sides so that the turn-over comes slap in the middle of the Larghetto.

I don't suppose we shall hear the Strauss-Wilde Salome again, but it is mighty clever, in its erotic way: and yet a curiously bugaboo way, that perhaps would pall now that we are thrilled every day or supposed to be. Yet there is no other music really like this, that tackles so horrible a subject with such earnestness and vim. We have to remember that it is nearly thirty years old. The scene on this disc is that in which John (Jochanaan, as he is here called) is brought before Salome, repulses her attempt to vamp him, and descends again into his cistern-cell. There are numerous motives, which are very clearly set forth in Mr. Lawrence Gilman's guide to the opera (John Lane). Two leading ones of the prophet are that on the horns, about 1 in. on side 1, and the one which Mr. Gilman calls "Prophecy," which is best heard at the start of side 2. There is also Salome's theme of "Ecstasy," as Mr. Gilman calls it—the descending first-quarter-chime theme. It is worth one's while to hear this beautifully recorded playing of music that some may find powerful and others ugly, though not in the cacophonic sense in which, alas, we have been "larned" to use it in these post-war years.

Ultimately, you forget this is all a window on the past and are only sorry that the music has ended

Piero Coppola is a name less familiar to historic CD collectors than many. As a conductor Coppola was not one of the great iconic figures between the wars, but achieved a certain fame as the head of His Master’s Voice in France. In this capacity he led and recorded some of the great early French discs of Debussy and Ravel, including the first recording of Boléro.

The Schumann performances featured here begin with the most recent, the 1946 “Spring” Symphony Coppola recorded with Decca in Kingsway Hall. To its credit, one is struck by the modernity of the acoustic. (Would that Toscanini had been exposed to FFRR and recorded here!) This is a normal-sounding orchestra in a normal symphonic space, though Gramophone noted the timpani weak when it was first reviewed, and I concur. That is a fairly serious flaw in Schumann. French ensembles of the era have not often been admired, and indeed are at times subject to caricature as “wheezing accordions,” but the French National Orchestra here, except for a pinched oboe, sounds perfectly modern to me. As an interpretation, this “Spring” comes across as neither Szellish nor Furtwanglerian, but occupies a relaxed and natural middle ground, though a bit on the slow side as the movements proceed. When a conductor can expand nicely in the big fanfare climax of the first movement, you know you are on safe ground, and Coppola does. The transfer is very good, with only the tiniest bit of refined hiss now and then to remind anyone of its 78-rpm past.

The 1933 “Rhenish” that follows does show its age, yet is somehow quite listenable. It is a mainstream interpretation rendered quite thrusting by up-close miking, but there is enough bass and acoustic space to feel the music float on its own tremoli, which is essential in Schumann. One notes in early recordings a tendency to play solemn music quickly, probably to avoid boring people over the racket of the mechanics, and that is the case here with the “cathedral” movement. A rather French-sounding trumpet gives an unusually jaunty quality to the finale. It is notable, though, how judicious and modern the use of portamento is throughout and how decently accurate the playing.

There is a nice sense of fullness and drama to the Wagner excerpts that follow, though once again we are speeding along like a movie score of the time. The pendulum-like solemnity of the Transformation Music is normally such that one feels clobbered by anvils. Here it is more like a stage villain trying to mesmerize a maiden with a pocket watch.

Even so, both the Wagner and the Strauss excerpts are effective, the latter somehow fuller and more evocative sonically. Indeed, the Pasdeloup horns sound very up-to-date, atmospheric, and evocative, as befits an orchestra named “Wolf-Step”! Ultimately, you forget this is all a window on the past and are only sorry that the music has ended.