"Backhaus and Clemens Krauss give us a fine performance" - Gramophone

As with previous recordings in this series, I have been able to tackle not just the issues of background hiss and tonal balance, but also pitch. The Concerto No. 4 showed a gradual slide upwards through the second movement from a low start, whilst the finale drooped off at the very end. The Emperor, whilst benefiting from significantly finer sound quality, proved to be considerably erratic, pitch-wise, suggesting multiple and quite frequent edits between takes from different days or machines causing regular jumps up and down. Both concertos have been leveled out to concert pitch.

I was able to release superb sound quality in both, and though the strings in the earlier recording still show a tendency towards shrillness, they are much improved over the original harsh sound here, without any imparment in the clarity of the piano tone which might have resulted from a straightforward reduction in treble. No such problems with the Emperor, where an already fine sound has been further rounded out, with greater extension in both treble and bass and a more generous overall feel from an excellent recording.

XR remastering by Andrew Rose at Pristine Audio, March-April 2012
Cover artwork based on a photograph of Wilhelm Backhaus 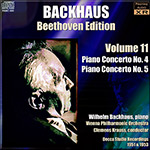 Backhaus and Clemens Krauss give us a fine performance, as one might expect; and from the recording point of view I find it commendable—more level in tone and more manageable than many LPs. The piano tone is mostly very good, but wears a little thin in the cadenza of the first movement, and perhaps the balance of soloist and orchestra is just a little less good in the second movement. The Backhaus-Krauss is, of course, much nearer to the Gieseking-Karajan than to the Rubinstein-Beecham. It is a restrained performance, with the design of each movement beautifully laid out before us, and with no attempt of any kind at display on the part of the soloist. The style of the performance may thus be called " classical".

Five Emperors ; but this last of the house clearly reigns unchallenged in one respect— its recorded sound is fuller and richer than that of any of the others, and presents for the first time a completely acceptable piano tone. The balance, too, is good throughout ... The performance revealed by this good recording is unusual, and certainly unexpected. Backhaus can, and sometimes does, pin a Chopin Mazurka back by its ears and belabour it unmercifully. The Emperor Concerto, more able to stand up to such treatment, he approaches instead in a fashion almost to be described as coy ; when a lover goes a-wooing he could more appropriately indulge in these little fancies of hesitation, and of delicacy. I don't wish to suggest that it is erratic to a fault ; I do wish to suggest that there is thought and feeling behind this of Backhaus's performances, even though all will not find themselves permanently in agreement with its results. The Vienna Philharmonic do agree, or are made to seem to do so by Krauss they, too, are unhurried and unruffled, and never fail to match their style to that of the soloist.

Pristine Audio has recently issued an all-Beethoven Wilhelm Backhaus Edition containing his first cycle of the sonatas, recorded for Decca in the 1950s, the Diabelli Variations, and the five piano concertos with Krauss, Böhm, and Schmidt-Isserstedt conducting. These recordings from 1951 (No. 4) and 1953 (No. 5) are Pristine’s Volume 11 in the series. Backhaus is inconsistent in the sonatas. He plays some of them with authority and real engagement, but others sound perfunctory, not fully interpreted. This is also the case with the two concertos. While the Fifth represents his playing at its most controlled and communicative, he doesn’t seem to identify as much with the less monumental Fourth.

The “Emperor” had quite fine sound to begin with, but Andrew Rose has corrected pitch problems along with issues of background hiss and tonal balance in both concertos. The result is a rich depth of texture in the orchestral sound that’s splendid indeed. No doubt, some of the pleasure comes from the orchestra being the Vienna Philharmonic at a time when the sound of its strings—lush but somehow sweetly personal—and winds was still very distinctive.

Clemens Krauss is a fine Beethoven conductor who offers shapely phrasing and detailed dynamic control. In the livelier sections of the Fourth, he seems to be accompanying a more nuanced performance than Backhaus gives. This is not to say that there aren’t admirable moments. The piano’s opening statement is very beautifully played, and Backhaus is extremely sensitive and precise in the second movement, but his passagework, while accurate, often sounds like he’s on autopilot: driven, metronomic, and without much shape or emotional character. (A good antidote is Schnabel’s joyful, more polished 1933 recording of the Fourth with Malcolm Sargent’s deft accompaniment, but maybe it’s unfair to compare 67- and 51-year-old pianists.)

While tempos in both concertos are fairly standard, the start of the Fourth’s finale sounds miscalculated. It begins deliberately, slower than it should be, and Backhaus’s opening statement sounds restricted and lumpy. A few lines later, he switches gears, creating a true vivace, and the performance improves. I wish that Pristine had identified the rambunctious cadenza—it’s more chromatic and raucous than the usual one by Beethoven—that Backhaus plays in this movement. I wonder whether it could be his own.

The “Emperor” Concerto shows Backhaus at his absolute best in playing that’s steady but not rigid, with rock-solid rhythm and fluent, all-encompassing technique. He has a majestic concept of the first movement, projects strength and good spirits in the third, and gives a direct, heartfelt reading of the slow movement that I find very moving. The recorded sound of the piano is clearer here than in the Fourth. This is not simply a worthy historical recording of the “Emperor,” it’s a truly great performance that anyone who loves the work should hear.