These recordings were all made, with the exception of Symphony No. 97, at the Salle Wagram in Paris over a period of four days in October 1957, alas in mono - the second volume was recorded the following year in stereo. These transcriptions of the 1970s LP issue have done away with EMI's electronic stereo and (where ordered) have the far more subtle Ambient Stereo effect applied.

The symphonies were surprisingly varied both in tone and pitch; I've endeavoured to eliminate these variations as much as possible, bringing a new cohesion to the recordings. As the originalss varied in pitch between A4 = 444 and 449Hz I've used Beecham's average of 446.15Hz across the board. In a number of cases an individual movement or section was out of tune with the rest of the symphony, and this too has been rectified. Various tonal irregularities have also been ironed out - an unnatural high frequency "harshness" found in some recordings has been overcome, for example.

XR remastering by Andrew Rose at Pristine Audio, January-February 2012
Cover artwork based on a photograph of Sir Thomas Beecham 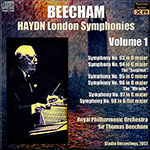 "...Not merely are they rarely heard: until very recently they were never heard correctly. The modern editions are almost without exception appallingly faulty, omitting Haydn's phrasing and dynamics and ornaments and tempi, or else flatly contradicting them; and in quite a number of cases even the notes are wrong. The Herculean labours of an American scholar, Mr. H. C. Robbins Landon, have clarified the situation a good deal. In his book, The Symphonies of Joseph Haydn (Universal Edition and Rockliff) he includes a list of errata for the Eulenburg miniature scores of the twelve "Salomon" symphonies; although inaccurate, these are the most nearly reliable current editions.

I mention this difficulty about the texts of the symphonies simply in order to make clear what it is that Sir Thomas Beecham has in fact done. He plays all these symphonies in uncorrected versions which differ in varying degrees from what Haydn wrote. In several cases his sheer musicianship has enabled him to supply nuances of phrasing or dynamics which Haydn did ask for but which have dropped out of all modern editions; in others he has introduced variants of his own which Haydn would surely have approved. But elsewhere the text has become too corrupt to be restored simply by intuition, however musical, and it is these points that make one regret the gulf that separates musicologists from practising musicians, particularly of the older generation. Against this we have to set Sir Thomas's other qualities, which compel forgiveness. There's just a touch of the chocolate-box in his interpretations of eighteenth-century music, of course, but only in some of the slow movements does this really matter. Elsewhere his acute ear for details of phrasing, rhythm and instrumental balance carry us wholeheartedly with him. This set is Haydn's triumph in the first place, but one can only be grateful that Beecham should lavish his immense gifts on music which far too many conductors neglect..."

This is the issue to get ... we get a truer picture of the Royal Philharmonic and of Beecham’s Haydn

What, again? EMI reissued these recordings on CD in 1992, in 2004, and in 2011. We’ve been talking about escaping the “Papa Haydn” syndrome for half a century, and these are the performances we’ve been trying to escape. In Fanfare 28:3, I damned them as “overbearing … stolid … square … affected, more Beecham than Haydn … little sense of spontaneity or joy.” In 35: 2, Richard A. Kaplan, reviewing a 34-CD Beecham set, found these Haydn symphonies “inappropriately weighty, even pompous.” Kaplan’s description of Beecham’s Mozart (“alternately stodgy and quaint”) fits my view of his Haydn even more closely. I’ve listened to only the first CD of the first set (Symphonies Nos. 93, 94, and 95), as that’s what arrived in the mail, but I’ve known these recordings from time immemorial. A second disc is supposedly on its way; if it brings any surprises, I’ll get back to you.


The second set arrived complete. The opening Vivace assai of No. 99 in E♭ is played slowly, depriving it of all vigor and sparkle; the following Adagio is softened and sentimentalized. Beecham’s Minuet is a prime example of the Papa Haydn syndrome, powdered wig and all; the carefully isolated chords have no force of attack, and the Trio is unbearably sweet. The Vivace finale tiptoes along at a very moderate pace. One of Haydn’s most dynamic, potent symphonies has been reduced to a series of charming effects. I could go on and on, but to what point? With such performances the norm in the first half of the 20th century, it’s no wonder that Haydn was considered a minor composer. Beecham (1879–1961) was locked into that time; in 1958 he still used error-ridden scores from an earlier era, ignoring all of Robbins Landon’s corrections as well as most repeats. By this time, Hermann Scherchen’s recordings and many on the Haydn Society label had demonstrated how vital Haydn’s symphonies are. There are a few movements that go well in Beecham’s performances, notably the opening Allegro of No. 104, the “London” Symphony.


If you must have these recordings, however, this is the issue to get. The performances in the first set (Symphonies 93–98) have suffered great indignities from EMI’s executives and engineers. First, this English orchestra traveled to Paris in October 1957 to record five of these six symphonies at Salle Wigram, perhaps the only major recording site not equipped for stereo at the time. All of EMI’s reissues have been in an electronic stereo version. Pristine’s Andrew Rose has restored true mono, and then added his “far more subtle Ambient Effect” as an option, heard on the review copies. The second set is in stereo. Rose also has rectified a number of pitch irregularities that have plagued previous issues. The result is that we get a truer picture of the Royal Philharmonic and of Beecham’s Haydn. Which engenders a disturbing paradox: Now that the orchestra can be heard properly, all the problems that Kaplan and I complain about stand out even more clearly.