As the Gramophone reviewer noted (see Additional Notes), the 1936 Telefunken Beethoven recording played considerably sharp - at 78rpm the average pitch of the recording was A=456.57Hz. Here it is offered at concert pitch, A=440Hz. Some of those Telefunken sides were exceptionally long, resulting in considerable treble loss at the end of some sides. As my aim here has been to preserve as much top end as possible, this will be apparent in one or two places. Likewise the listener will hear a slightly raised level of hiss, left in order to preserve as much as possible of Kulenkampff's superb upper tone.

If it seems unfair to put a mid-30s German recording up against Decca's superb 1947 ffrr recording of the Brahms, well the Telefunken certain stands up well, even without the extended frequency range of the later recording. The Decca recording was Kulenkampff's penultimate session for the company, and may well have been his final orchestral studio recording - he was to go on to record three sonatas with Solti at the piano the following summer, just weeks before his untimely death.

The Beethoven recording was naturally very reverberant, and I have not added to this. By contrast, the Brahms seemed excessively dry, and a small amount of convolution reverberation has been added to compensate for this - in the absence of a suitably Swiss acoustic space I've used the fine sound of Birmingham Symphony Hall, England, albeit very sparingly.


XR remastering by Andrew Rose at Pristine Audio, February 2012
Cover artwork based on a photograph of Georg Kulenkampff 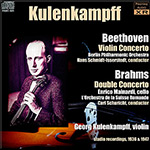