The original discs from which this transfer were made were in near-mint condition and the transfer process was straightforward. Although sound quality was acceptable for its day, it had a certain veiled boxiness to it which has been entirely lifted by XR remastering. I've also been able to remove a considerable amount of hiss and rumble present on the original recording.. 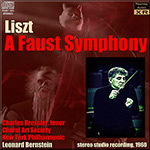 I took this CD off the “to review” pile immediately after writing about Eliahu Inbal’s recording of La Damnation de Faust by Berlioz. That was a pure coincidence but it was a happy one because, as I learned from the booklet note accompanying Jascha Horenstein’s BBC Legends recording of this Liszt symphony, it was Berlioz who introduced Liszt to Goethe’s Faust in 1830. Subsequently Berlioz dedicated La Damnation to Liszt and in due course Liszt reciprocated by dedicating his Faustian symphony to his French colleague. It was interesting to listen to the composers’ respective responses to Goethe in close proximity.

This is the earliest of three Bernstein recordings of A Faust Symphony. There is a CD recording on DG with Kenneth Riegel and the Boston Symphony Orchestra (447449 2) and a live performance with the same forces on a EuroArts DVD. I learned from Patrick Waller’s enthusiastic review of the DVD that the DG audio recording was set down, under studio conditions, at about the same time as the live performance, that’s to say in the summer of 1976. I’ve not experienced either of those 1976 accounts. I use the word “experienced” advisedly because it’s clear from Patrick’s comments that the 1976 live traversal was something rather extraordinary and this present recording, from much earlier in Bernstein’s career, is far from ordinary either.

Patrick drew attention to the duration of Bernstein’s 1976 reading in comparison to the timings for some rival versions. It’s interesting to compare his 1976 timings with those in 1960, an exercise which suggests that this was another example of Bernstein becoming rather more expansive in later years

The 1960 performance is gripping and it held my attention throughout - and I say that as someone who is not a particular fan of Liszt’s orchestral music. At the very start Bernstein portrays Faust as a restless, questing spirit but the questing is not tentative; actually I was put in mind of Tchaikovsky’s later Manfred Symphony. At 2:38 the allegro impetuoso is launched with tremendous attack and energy and though Bernstein is in no way insensitive to the more reflective pages in this movement the overall impression is of great drama and intensity in the music making. Often the performance is big and flamboyant, something which the up-front recording emphasises. The playing of the NYPO is superb, the attack razor sharp. The bugle-like tone of the principal trumpet disconcerted me briefly (22:18) but otherwise one can only admire the sheer panache of the New Yorkers.

There’s some fine woodwind solo playing at the start of the Gretchen movement and thereafter the string section is on top form. Bernstein phrases the music compellingly and injects passion at the appropriate places while being sensitive in the more gentle paragraphs.

As you might expect with this conductor, the Mephistopheles finale is electrifying. Listen to how Bernstein gets the strings to play close to the bridge in the opening. The performance is biting, fast and furious, Bernstein playing the music for all it’s worth - and then some. The NYPO offers incisive, virtuoso playing and the reading is gripping. When we reach the ‘Chorus mysticus’, which is separately tracked, the men of the Choral Art Society are very good; their singing is often stirring. I’m not very taken with the singing of Charles Bressler (1926-1996), I fear. His tone is narrow and rather pinched. I spotted an online biography from which it seems that he may have been particularly associated with pre-Romantic music. Frankly, his voice is too small for this assignment. Listen to John Mitchinson on Horenstein’s 1972 recording (BBCL 4118) to hear what a tenor who is equipped for Wagnerian roles can bring to the part. However, the disappointing contribution from Bressler is but a small caveat. Bernstein sweeps the symphony to a suitably transfiguring close.

There are other ways to present this music and Pristine reproduce Edward Greenfield’s 1964 review in Gramophone in which, while finding much to praise in Bernstein’s performance, he comes down in favour of the 1958 Beecham recording. However, Bernstein, when on top form - as he is here - had the knack of persuading the listener that, for the moment at least, this was the way to hear the music he happened to be conducting. This is a tremendous performance which reminds us why this great musician took New York by storm in the years when he was at the helm of the New York Philharmonic.

The recording is up-front - though not aggressively so. Greenfield described it as “very reverberant but brilliant as well”. I think that’s a fair description. On this new transfer there’s good bass definition, the treble is bright but not excessively so, and plenty of detail registers. At the very end the organ, which may well have been dubbed in, is suitably sonorous. Andrew Rose has transferred the recording from original LPs in near-mint condition. He comments that the original sound “had a certain veiled boxiness to it, which has been entirely lifted by XR mastering”. He also says he has been able to remove a lot of hiss and rumble. On my equipment the sound packed quite a punch, especially when one considers that it’s now over fifty years old.

This is a memorable example of Lennie in full cry with the New York Philharmonic.