Bruno Walter - witness the birth of a recording legend!

This release at Pristine explores the earliest recordings of a legendary twentieth century musician. Bruno Walter's career as a conductor may have pre-dated these recordings by a number of years, but in these six rare acoustically-recorded overtures, with what was then perhaps the finest orchestra in Germany, the Berlin State Opera Orchestra, we get to hear the first suggestions of the legend to come.

Multiple award-winning producer Ward Marston has worked miracles in the sound quality achieved from these 1923-25 discs - despite the limitations of the pre-microphone era they really are an outstanding record of Walter's early recorded brilliance.

Producer and Audio Restoration Engineer: Ward Marston
Cover artwork based on a 1912 photograph of Bruno Walter
We are grateful for the use of the discs for these transfers from the collection of David Schmutz 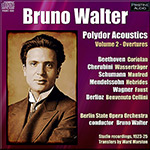 Bruno Walter claimed that he first recorded around the turn of the 20th century, an assertion cited in the biography of the conductor by Erik Ryding and Rebecca Pechefsky. It was supposedly of music from Carmen, which he did record but more than two decades later. Whatever the truth, orchestrally speaking he first becomes audible in the series of acoustic Polydor recordings made from 1923 to 1925. Pristine Audio has already released his first major undertaking, Tchaikovsky’s “Pathétique” Symphony (1925, complete), coupled with Mozart overtures and two pieces from Carmen, on PASC142.


What this latest release demonstrates is the canny nature of recording selections made by companies such as Polydor, which would have been well aware of rival releases. Of the six overtures, four were making their first-ever appearance on disc: those by Cherubini, Schumann, Wagner, and Berlioz. It’s easy to label musicians “discographic pioneers,” not least in a landscape where so much remained to be recorded, but in that respect Walter was treading new water.


The Coriolan Overture had already proved popular on disc. Thanks to Claude Graveley Arnold’s The Orchestra on Record 1896–1926 we know that Willem Mengelberg, Otto Urack, Landon Ronald, Leo Blech, and the more obscure Johannes Heidenreich had all recorded it by the time Bruno Walter set down his version in August 1923. Bass reinforcements, of course, were very much the norm. They work here with the desired strategic heightening effect, making audible what the acoustic horn could not pick up, though occasionally the balance is swampy despite the engineers’ best intentions. The performance has a degree of elasticity that must, to a large degree, accurately reflect Walter’s expressive position at the time—he was in his late 40s in 1923—not least in the slightly sentimentalized second subject and freedom of metrical pulse. A check of the turn-over point reinforces the fact that these were not decisions imposed on him, but were part of a more loosely structural approach.


There are more overt portamenti in the performance of the Cherubini overture. The bass reinforcements are also rather more crudely employed than in Coriolan. One could attribute the greater portamenti to the players’ unfamiliarity with the work and thus their inability to coordinate slides before the recording session. Despite the sepulchral bass line, and some infelicities (tuttis are a bit muddled), the slow introduction is richly characterized. Where a decision may have been foisted on Walter is the side change at 5:05 in Schumann’s Manfred Overture, where he edges slowly to the end of the side. It makes for a rather sticky moment. Again, though, this was a premiere performance on disc and if the winds are not on their best behavior, being rather shrill, it adds to the generation of heat and energy.


The Hebrides Overture has a rather more steely surface, and a bit of scuffing, but Ward Marston has done a fine job here, as elsewhere, managing the Scylla and Charybdis business of surface noise and frequency response with his usual sensitive judgment; retention of the former enhances the latter. My only complaint is no one’s fault; those bass reinforcements sound a bit sleazy here. The longest overture is Wagner’s Faust, which was recorded on three shellac sides, and another first-ever recording. Like Coriolan it was recorded on August 1, 1923, and responds well to his direction. The final item is Berlioz’s Benvenuto Cellini Overture. I suspect that if you were in the habit of playing the “who recorded what first” game (a perilous one) you’d have come up with two dozen names before you’d come up with Walter’s. Yet Walter it was, and he directs in a rather charmingly ebullient way.


DG (2740 259) reissued Coriolan, though I’ve not had access to it for comparative purposes. Walter remade the Schumann in Chicago in 1956 for a WGN-TV telecast, and the Mendelssohn with the New York Philharmonic Symphony live in 1948 (Music & Arts CD714), with which orchestra he also recorded the Berlioz, though I’m unaware if it’s been released commercially. In 1939, with the NBC, he recorded the Faust Overture.


As James A. Altena pointed out in his review in Fanfare 35:6, the orchestral attribution in Pristine’s documentation is a little shaky and omits reference to the contribution of the Berlin Philharmonic. Walter admirers will find much to interest and intrigue in this selection.