Plus recordings from Berlin in new Obert-Thorn transfers

The sources for the transfers were a postwar, yellow-label Deutsche Grammophon pressing for the Lothar; wartime Siemens Spezial pressings for the Franck; and Italian Voce del Padrone pressings for the two La Scala items. The La Scala recordings (presented here in their entirety) appear to be particularly rare, and some surface noise remains on the lower-grade wartime shellac.


Producer and Audio Restoration Engineer: Mark Obert-Thorn
Cover artwork based on a photograph of Carl Schuricht 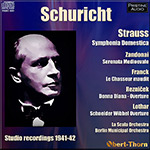 I certainly welcome Schneider Wibbel’s overture back to the catalog, along with more recordings by the versatile Schuricht

Although he never reached the first magnitude celebrity status of some of his colleagues, Carl Schuricht was a busy conductor in Germany and a welcome guest outside it, in part, I would guess, because, unlike some of his colleagues, he was comfortable when he conducted the music of other nations. Fortunately, he did leave quite a few recordings that testify to this. Some of them are on this CD. One is by Riccardo Zandonai, who lived from 1883 to 1944 and was primarily a composer of operas, the only one of which you are likely to come upon nowadays is Francesca da Rimini, first heard in 1914. I’d love to know how Schuricht discovered Zandonai’s Serenata Medioevale, a rhapsodic, heavily chromatic nocturne for cello and orchestra. Maybe cellists aren’t lining up to play it because it’s too dreamy and subdued, but what is more likely is that they don’t even know it exists and I’m delighted that it’s included here. You will hear more surface noise than you are accustomed to, especially on the Italian 78s, because the recordings were issued on inferior wartime (1941) pressings. Some American 78s suffer from the same problem. Like most conductors, he zips through the Donna Diana Overture and skips the repeat, making the piece seem even less substantial than it actually needs to be. The only recording I’ve ever liked is that of Albert Wolff, which is more playful and light-handed.


The other souvenir of his 1941visit to Milan is a recording of Strauss’s Symphonia Domestica, a favorite work of the composer (and me), which had its premiere at Carnegie Hall in 1903 with Strauss on the podium. Depicting some events in the daily routine of Strauss and his wife and son, it’s a sort of tone poem à clef. Schuricht, I am pleased to perceive, seems to treat it as a series of intimate tableaux rather than as a sonic blockbuster. Strauss, of course, can’t resist showing off and inserts an elaborate double fugue into the proceedings. Personally, I think it adds four unnecessary minutes to the piece but he eventually ends the “symphony” with an exciting climax that leads to a witty close. The La Scala winds sound recessed but one seldom loses any significant detail, for which I give the credit to Schuricht, not the producer. I seriously doubt that the orchestra had ever played the piece before Schuricht’s engagement, which makes the performance even more impressive. Of course, good as the performance is, it doesn’t really compete with the better stereo recordings, among which I would include those of Maazel/Vienna, Mehta/L.A., Previn, Reiner, and Szell, with de Waart, Karajan, Kempe, Maazel/BRO, and Sawallisch not far behind them. On the “historic” side, Mitropoulos (unofficially), Ormandy (the first electrical recording), and (especially) Krauss contributed some good ones. There is no lack of quality choices.


Schuricht’s Berlin performance of Le Chasseur maudit, if it can’t match the virtuoso brilliance of later recordings from Boston (Munch), Minneapolis (Oue), and Philadelphia (Muti), was almost certainly the best recording of the piece until Desiré DeFauw’s Chicago Symphony issue from the mid 1940s. Schuricht saves something for the end, avoiding the sense of anticlimax one can get when the conductor (Munch is guilty of this) gets carried away by his excitement during the first half of the piece.


Another interesting novelty on this collection is the overture to Schneider Wibbel, an opera by Lothar Hundermark, who used the name Mark Lothar and was primarily a composer of light operas. One of his teachers was Wolf-Ferrari, and you can hear traces of his teacher in this cheerful, eccentric overture, a flashy, tuneful showpiece and quite a curtain-raiser—I wonder if Schneider Wibbel, supposedly his most successful opera, lives up to it. Born in 1902, Lothar lived until 1983. He wrote a lot of songs, and one Lied (Der Pirol) and one song cycle (Musik des Einsamen) are his only other pieces that appear to be available on recordings right now. I certainly welcome Schneider Wibbel’s overture back to the catalog, along with more recordings by the versatile Schuricht.