New transfers given a complete audio makeover with XR remastering

All three of these recordings were restored from recordings in the private collection of Keith Bennett, to whom we're very grateful. The Cherubini and Strauss, from later BBC rebroadcasts, were in better condition than the Bach, but all suffered considerable sonic deficiencies which I've been able to largely alleviate. I noticed some considerable variation in hiss, which tended to be at its highest at the beginning of the recordings. I've dealt to a degree with this, as well as removing or reducing a considerable number of audience coughs, though some do remain.

XR remastering by Andrew Rose at Pristine Audio, December 2011
Cover artwork based on a photograph of Guido Cantelli 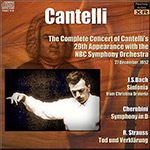 Both of the performances with the NBC Symphony Orchestra have been issued on CD. We ot the twenty-first century are very aware of the research which has been undertaken concerning performance practice in the eighteenth century and there are plenty of recordings with period instruments available. But what, one wonders, would have been the reaction to these perfonnances for those present at either of these concerts? It comes as no surprise that the orchestra's strings are superb and — ior monaural recordings of broadcasts — the woodwinds are clear enough. There are, mercifully, no interpretive quirks, but the musicians were inflicted with a bronchial audience during the 1952 concert.

Have there been more than half a dozen recordings performances of this symphony? Possibly not and for many, the name Cherubini is merely that of an historical figure, 'a conservative revolutionary' as The New Grove put it: probably his most well-known work is the overture Anacreon, ou L'amour fugitif recorded by both Furtwängler and Toscanini (and was scheduled for Cantelli's concerts with the Philharmonic-Symphony Orchestra of New York in December 1956). However, it is well to bear in mind that Beethoven thought highly of his contemporary although, with the passing of the years, we know that Beethoven was ahead of his time whereas Cherubini was of it.

Toscanini's insatiable curiosity often led him to the byways away from the generally accepted repertoire of the period and for those who do not know this symphony his performance will refute any suggestion that Cherubini was a dull old stick. The symphony has a vigorous first movement, with a melody in the second movement that lingers in the memory, a bucolic Haydnesque minuet followed by a cheeky trio as near to Rossini as one could hope to find (surely one cannot hear it without smiling, at least inwardly) and ends with a vigorous finale.

No doubt the Maestro's enthusiasm sparked Cantelli's interest. It is quite possible that after Cantelli's final concert with the NBC Symphony Orchestra in the Fifteenth Season on 1 March 1952 he stayed on in New York to hear both Toscanini's concert the following week — which included this work — and the Maestro's recording two days later. Whether or not that speculation is misplaced, he must have spoken of the symphony with the Maestro which made such deep impression that he included the symphony in his very next concerts in June with the Orchestra della Scala as well as giving a perfonnance with the Philharmonia Orchestra during his next visit to London in October. Even more interesting is that he included it in his next series of concerts with the NBC Symphony Orchestra.

Both of his performances are delightful with just a touch more poise than Toscanini in the first, third and fourth movements but yielding to the older conductor's restraint in the second.

The biographer Richard Specht stated that the programme for this piece was based on Strauss's personal experience and it is true that Strauss was seriously ill in 1891 but only eighteen months after the completion of the score. In 1894 the composer completely refuted Specht's fanciful suggestion and stated that the idea of portraying a man close to death came to him some time in 1888.

The reader's attention is drawn once again to the fact that Karajan's performance withe the Wiener Philharmoniker is not only the quickest by a substantial margin but is also the nearest to the composer's own timings.

One hesitates to draw attention to die fact that Toscanini and Beecham — whose attitude to music-making was so very different — had at least one quality in common: both had the ability to convince the listener that under their direction a second-rate piece could actually be made to sound much better than usually perceived. There can be no doubt that Tod und Verklärung is a lesser work than Don Juan but it had — judging from the number of times Toscanini performed the piece when other superior Strauss compositions received very few perfomances (eg Ein Heldenleben) — a fascination for the conductor. His first commercial recording was with the Philadelphia Orchestra in 1942 but the broader paced performance with the NBC Symphony Orchestra ten years later is better in terms of clarity while still avoiding any feeling of mawkishness. It is worth comment that many musicians regarded the rehearsal of the work for this 1952 performance as a highlight of their careers.

No doubt Cantelli benefitted for Toscanini's work with the orchestra when he gave his performance a little over nine months later and he certainly avoids all hint of extreme exaggeration by ensuring that the shattering climax actually had expressive meaning.

Keith Bennett is the author of Guido Cantelli – Just Eight Years of Fame (published 2009) which is only available from GC Publishers. For further details either write to GC Publishers, 21 Nunn Close, Martlesham, Woodbridge, Suffolk IP12 4UL, UK or e-mailgcpublishers@keithbennett.waitrose.com

Pristine’s Cantelli series continues to unearth material not otherwise available. This 1952 NBC concert is quite new to me. Andrew Rose’s source was a tape copy in the private collection of Keith Bennett (author of the recent Cantelli biography), and it seems to have presented quite a challenge to his transfer skills. While the sound is not up to the standard of the best Cantelli/NBC sources, relatively rough and opaque, it is perfectly listenable.


Cantelli followed Toscanini in championing this rarity by Cherubini (the older maestro made his studio recording for RCA in the same year). The work is skillfully crafted, much preoccupied with counterpoint, and with many moments of genuine originality, including a notable penchant for Beethovenian harmonic touches—though Cherubini’s tend to be confined to the level of local effects, with none of Beethoven’s long-range power. Not surprisingly, Cantelli conducts a performance of impressive refinement and discipline. On the debit side, however, textures are excessively string-dominated, tending to heaviness. Tuttis become tiring to listen to, unrelenting and opaque (though the close-up, colorless recording no doubt does not help). For my money, it is all just too monumental for the music’s own good—it needs a lighter touch, more light and shade (as can be heard in Toscanini’s contemporaneous studio recording, despite the use of what sounds like an equally large string section).


The Bach adds little to the disc’s attractions, in its very dated performance style—slow, heavy, and legato, with no harpsichord continuo.


What makes the concert a keeper is the extraordinary performance of the Strauss. The slow introduction is clear-eyed, precise, and unusually articulate at a robust dynamic level—again the close recording may be the culprit, but this patient sounds suspiciously hale, far from death’s door! The ensuing Allegro molto agitato is unforgettable, in its combination of Cantelli’s trademark virtues—solidity, precision, clean articulation, and lucid contrapuntal textures—with expressive intensity of an exceptional order: an elemental outpouring of tone from the NBC musicians, who play as though the concert will be their last! The final transfiguration is played quite swiftly and straight, and is all the more overwhelming for it.


The notes reprint an excerpt from Bennett’s Cantelli biography, which on this evidence could have used a little more copy-editing before seeing the light of day.


This is obviously self-recommending for Cantelli collectors, perhaps less so for the rest of us, but the Strauss really has to be experienced.