Elgar's definitive acoustic recordings of his own masterpieces

XR remastering by Andrew Rose at Pristine Audio, October 2011
Cover artwork based on a photograph of Elgar
Total duration: 71:46 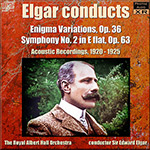