"Most memorable for its delicacy and finesse of voicing, with breathtaking dynamic control, and his trademark combination of singing luminosity with rhythmic tautness" - Fanfare 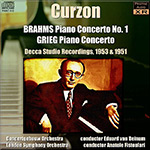 If he was capable of playing a routine bar I have yet to hear it.

The 1953 Brahms is the second of three studio recordings Clifford Curzon made for Decca, between the Enrique Jordá/National Symphony Orchestra (1945–46) and the George Szell/London Symphony Orchestra (1962). All are available in Decca’s gathering of his complete studio recordings in a series of bargain-priced Original Masters boxes. Although the difference in transfers is not huge, the advantage here goes to Pristine’s (from LPs, as usual), sounding richer, warmer, and with an expanded dynamic range compared to Decca’s own from the master tapes. If, in comparison to his stereo remake with Szell, the recording of the piano still comes across as rather colorless, lacking something in impact, that’s simply a limitation of the mono original.

Curzon was famous for completely rethinking his interpretations with every new performance or recorded remake of the same piece. Despite being very recognizably himself in fastidious nuance and refinement in all three versions, there are some very striking differences, most notably in the huge disparity of tempo in the Adagio, from a briskish 12 minutes with van Beinum to an incredibly spacious 16 (!) with Szell in 1962. On the other hand the finale got much slower between 1945 (though slackly conducted by Jordá) and 1953. Overall, the middle recording comes across as the most classical of the three, which has much to do with van Beinum’s conducting—lean-textured and buoyant, with finely drawn lines sharply projected by the Concertgebouw’s nasal, cutting sound, in striking contrast to Szell’s weighty, monumental approach with the richer-textured LSO. If much of the piano writing (starting from the first solo entry, which can come over as rather gray at the best of times) is inevitably more effectively projected in the better-recorded stereo remake, there is still much to relish, whether the virtuoso fire and attack of the first-movement development, the spontaneous, forward-pressing rhapsody of the Adagio’s restless second theme, or the inimitably Curzonian blend of visceral emotional engagement and minutely considered nuance in the finale’s two cadenzas.

As Pristine’s Andrew Rose notes, the Grieg (1951) was never a sonic prize, the recording of the orchestra rather grainy and opaque. If the Original Masters transfer seems to have a little more body and hall acoustic, that is outweighed by its markedly flat pitch, which Rose has corrected to the recording’s great advantage. The obvious comparison here is to the stereo remake with Øivin Fjeldstad (1959), which found the LSO in much better form than it was for Fistoulari in 1951; the earlier recording also suffers from an excessively slow Adagio (Fistoulari’s 7:16 to Fjeldstad’s 6:07). As for Curzon, if he was capable of playing a routine bar I have yet to hear it. He can certainly thunder when required, but the performance is most memorable for its delicacy and finesse of voicing, with breathtaking dynamic control at the quiet end of the spectrum, refinement of pedaling, and his trademark combination of singing luminosity with rhythmic tautness.

Curzon aficionados will probably find it worth supplementing their Original Masters discs with these new transfers. More general collectors are probably better served by the pianist’s stereo remakes.