"Classics of the gramophone, unsurpassed in their natural, idiomatic Viennese character" - Fanfare

XR remastering by Andrew Rose at Pristine Audio, September-October 2011
Cover artwork based on a photograph of Clemens Krauss with Richard Strauss
Total duration: 63:41 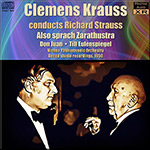 The orchestra had these works in its blood