A fine collection of overtures conducted by Hans Pfitzner 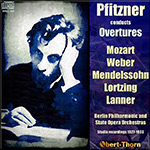